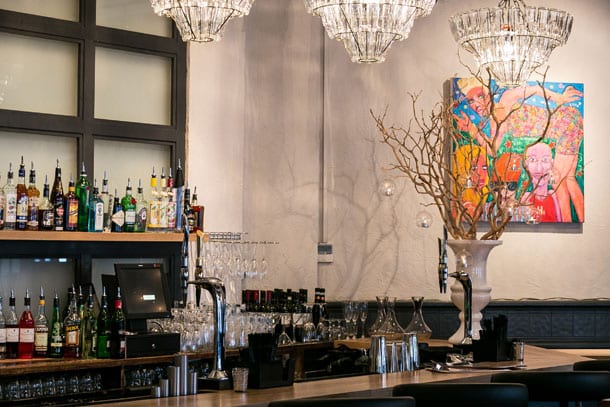 It was off to the wilds of suburbia as autumn popped its head round the door before making a brief exit. Cibo is a restaurant that has made a name for itself in the four months since it opened its doors. It’s taken over what was the garish La Tasca in Didsbury Village. This is proper Didsbury, not the beard-filled bars and eateries of Burton Road.

“…a chicchetti menu – in other words, small plates of Italian gorgeousness that you select like tapas…”

Ginger, Leggy and I ventured south out of the city on the new tram route to sample its delights.

Like Chicchetti, it serves, well, a chicchetti menu – in other words, small plates of Italian gorgeousness that you select like tapas or, as the Swinton red head calls it, ‘party food’.

Cibo is less garish than its predecessor. You’re greeted with a mellow wood and mustard vibe, with rows of comfy booth-tables, some startling artwork (was that a portrait of the fabulous Ziggy we spotted?) a bar area and, when we were there, a great DJ bringing a disco vibe and groove ambience (there is live music on Fridays and Saturdays, with a new jazz Thursday once a month). 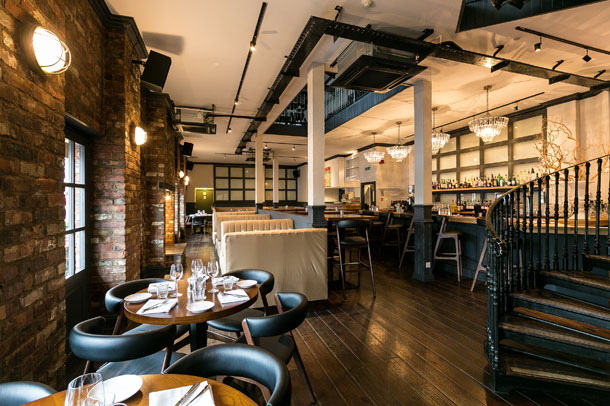 Seating 120, with an upstairs and downstairs terrace for smokers, it was bustling and busy, with efficient and clearly passionate staff. There are offers, including £20 for a bottle of prosecco on Fridays which comes with canapés (fizz is normally from £22 without the nibbles). Cocktails are from £7.50 and house wines from £19. They are open from noon and do a roaring lunch trade with a £10 menu – bargain. There’s loads more offers including a Sunday offer – you can find them on the website.

The chef, Martin Cardwell, has a love of Italian food and everything is made from scratch, which is what you would expect at these prices.

It’s not cheap and the problem with the sharing plate mentality is that it can soon add up. Choose wisely, however, and it’s great food and won’t leave your pockets too empty. We were advised to go for two to three dishes each –  enough for an average table (ie one without a giant Ginger) and maybe a spare.

It’s separated into fish, meat, pasta and pizza as well as a cold selection, with plates costing from a fiver into the teens. Ironically, it was the dishes we were recommended as the signatures which we least liked.

Black crab ravioli, which looked like mini-fedoras is a butter sauce, were good but not as good as the ones in Piccalinos, where perhaps the trick there is to offer one or two giant ravioli which means you can really get a good dollop of crab to taste.

The pistachio and lamb meatballs, which have also been lauded, were not our cup of tea. They were huge, a little too coarse and swamped in garlic, though I can imagine great for younger appetites. 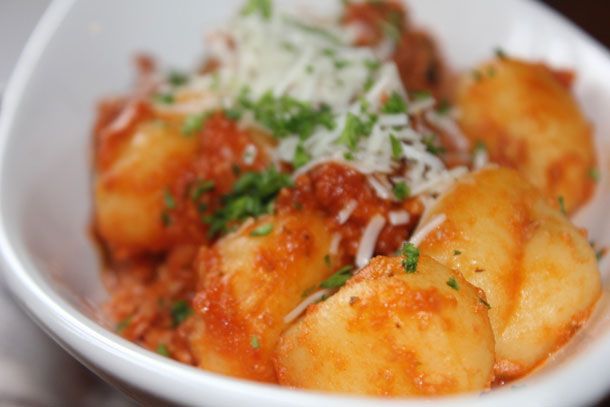 However, the gnocchi boar ragu was superb and was the dish that started a fork war (one of the problems of ‘sharing’), with perfect pillows of gnocchi and a tart, peasanty ragu.

“…big, juicy ‘northern’ portion… everything to the table fresh and piping hot…”

Scallops, which came untrimmed (squeamish please take note) were in a huge ‘Venus covering her bits’  shell, reminiscent of the 70s Abigail Party take on presentation and I thought they wouldn’t work with pecorino. How wrong I was. This was a delicious dish and one you should order.

Monkfish, was a big, juicy ‘northern’ portion and, again, a credit to the kitchen, which managed to send everything to the table fresh and piping hot. In fact, my one big gripe was that more or less everything came at once. This type of eating should come in waves. Australasia and Chicchetti do this wonderfully well, bringing complementary plates to the table so you can chat and lose an hour or two relishing the food rather than trying to down it while it’s still hot.

“Steak, with rocket and parmesan was a winner… melt-in-the-mouth tender.”

Anyway, back to our marathon of morsels. Steak, with rocket and parmesan, was a winner with Leggy, who was amazed it came as she ordered it (medium rare) and described it as melt-in-the-mouth tender. 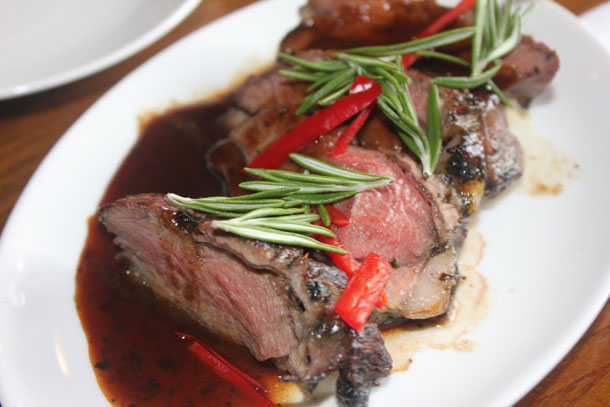 A goats-cheese pizza was left almost untouched until Ginger spied it nestling in the last possible space on the table and wolfed it – delish apparently.  Sides (yes, we had sides, well Ginger did) of spinach with chilli and broccoli and almonds were yummy and very green.

We couldn’t possibly have had dessert, stuffed to bursting as we were, so it was off into the blustery night to meet the bearded-ones at Folk on Burton Road (a bit like the Northern Quarter but everyone’s five years older). It was fun. They don’t do fizz so I had something called lager and met one of the most obnoxious men in the world who declared all English women were fat (he had been living in the Far East). Jog on fatty, was all I could think to say.

But back to Cibo, it’s good and I think it could be very good, given more time and especially if they start delivering in waves as this is how such food should be enjoyed.

If you live in Didsbury it’s definitely worth a visit. If you live in town, take a tram out and enjoy one of the offers or go for a Friday and make a night of it with the supercool DJ.

A tasty bit on the side. This could be the start of something serious.