This charming fan: Letters to Morrissey at HOME 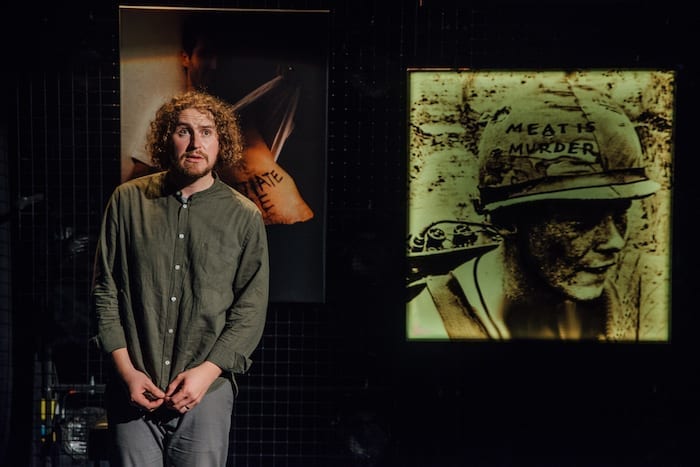 Walking into the theatre for one-man play Letters To Morrissey at Manchester’s HOME was like bursting into a teenage boy’s bedroom. Solo actor Gary McNair was sprawled on the floor, a spinning record player by his side, ready to take the audience on a trip of fandom, friendship and feeling misunderstood.

It was the opening night of the show’s five-day stint in Manchester, following on from its debut at the Edinburgh Fringe where it was crowned 2017 Scotsman Fringe First Award Winner.

Glaswegian McNair has earned acclaim for Fringe hits A Gambler’s Guide to Dying and Gary Robertson is Not a Stand-up Comedian, but Letters To Morrissey takes us deeper, with an incarnation of McNair himself taking us back to growing up on the outskirts of Glasgow, feeling like an outsider and turning to the former Smiths frontman for advice.

“If you don’t know who Morrissey is… get out,” says McNair, preparing to grip us with a well-sustained 65 minutes of Glaswegian drawl, schoolboy antics and swearing a-plenty.

If you were hoping for a sophisticated Mozza tribute, this is not your show. And it’s not for those seeking Smiths-inspired letter writing. Not one single letter is written on stage.

Instead, McNair shouts out the content of his fanmail to the audience. Sometimes it’s like a soliloquy, sometimes a desperate rant.

We watch a 15 year-old attempting to come to terms with life in 2002 – the Sugababes and Spice Girls still haunt the charts – pondering the big questions from so-called self-imposed celibacy to haircare.

“I want to quiff it like yours, but mine is a bit more like Mick Hucknall’s,” he sighs.

But rather than just being a case of Bigmouth Strikes Again, there is plenty of substance to the production, directed by Gareth Nicholls in a way which is likely to appeal to both Scottish and Mancunian audiences alike.

It starts with a present day McNair sitting on a hill overlooking the ‘shite town’ where he grew up, before taking us on a trip through his late 90s school days and back again.

It highlights how a love of music can inspire anyone from any background, and can help men and women alike engage with their emotions. Even McNair’s teacher is a Morrissey fan on the sly.

There are no hills or high school shown on the minimalist set. It’s a clever decision by designer Ana Ines Jabares-Pita, meaning the focus is firmly on McNair.

The lighting by Simon Wilkinson is made up of pictures of and quotes by Morrissey on the backdrop of the stage. It flickers and flashes according to mood and moments of role change, making the antics of this charming fan much easier to follow.

McNair is not only the writer and performer of this production. He also plays multiple characters, from his teenage self to the bumbling schoolteacher Mr McKinnon, with a series of outbursts from self-proclaimed ‘Jan The Lesbian’ thrown in for good measure. McNair is a skilled imitator, capable of creating characters which make us laugh.

It becomes almost hysterical at points, especially when it’s announced that Morrissey is coming to Glasgow’s Barrowlands Ballroom. McNair is reduced to screams, and a microphone drops from the ceiling in a way which could be considered either inventively funny or a little far-fetched.

Hard-hitting themes are crafted in with the humour. The reason why McNair starts writing to Morrissey in the first place is to ask for advice on behalf of his friend Tony – a troubled lad taunted by rumours that he has pushed his mum down the stairs.

This is a show capable of covering big issues like growing up, domestic violence, death and  questions why we defend people. McNair says the only people he’s had to really defend in his life are Tony and, of course, Morrissey – especially for the times he’s been a ‘flagrant narcissist’ online and sometimes just an ‘arsehole’.

McNair doesn’t try to portray Morrissey. That’s a good thing. He remains an enigma, an idolised figure who doesn’t answer fanmail, helping us realise that perhaps the real answers to life’s questions are much closer to home.