Celebrity Come Dine With Me: the TV show I’d rather forget 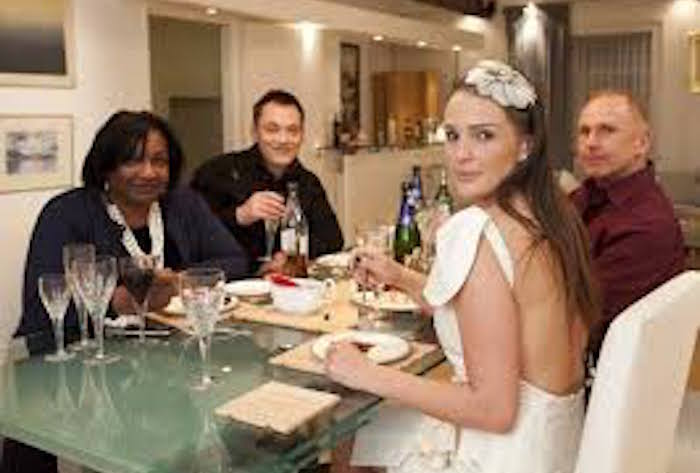 This week I was haunted again by a television moment from seven years ago that I’d rather forget.

How often do these things get repeated in the multi-channel world we now live in? I am constantly bombarded with cringey appearances on various TV shows I’ve guested on over the past twenty years thanks to our digital multi-channel environment.

But this was possibly the worst one. It was my rather drunken appearance (yes, everyone was and usually is) on Celebrity Come Dine With Me.

My mother could cook after a fashion, the fashion being meat and two veg – three if you count the odd onion – bunged into a big saucepan of boiling water. She was of a generation that had always had to make do. Not for her the delights of three courses and fancy ingredients. What it meant was that I learned to cook as soon as I could.

So when I was asked to go on Celebrity Come Dine with Me in a borrowed flat in ‘that London,’ I thought, well, it’s the little victories in life that count. That it must be my destiny to win. A cathartic culinary triumph forged on an anvil of hard times.

Diane Abbot’s mews house was our first port of call on a very cold Saturday night (-5) in Hackney). Filming had started at 9am and it was now 6.30pm and I’d been waiting in a mini-cab around the corner from her house for 90 minutes while the director and producer arranged cameras and lights.

In TV speak, this is called ‘hurry up and wait syndrome’ – get you to a location hours before you’re actually needed and leave you hanging around.

You see, the guests were a secret and it’s television folks, so comfort has nowt to do with creating art. Suffering from acute hypothermia, I was finally directed to knock on her front door and make my entrance.

“That’s great Terry and Diane, but could you walk in more slowly, Terry, and could both of you look more surprised to see each other?”

She sort of vaguely knew who I was through the half-light. Then the drinking started with a very strong and sweet rum punch and the rest of the night turned into a blur with four bottles of champagne to wash down the equivalent of half a bottle of rum each.

Interviews took place throughout the evening. What did we think of Diane and the food?

For some strange reason, my interview was saved until the taxis had arrived at 12.45am to take us home. Then scores were given out. So there I was as drunk as a teenage binge drinker trying to articulate the fact that I was too drunk to remember how mediocre the food had been.

I was sort of up against it from the start. For me it was an away fixture. No using the facilities of my home in leafy Cheshire. Instead, I was furnished with a London apartment belonging to an art critic with a small fridge full of left overs, a few blunt knives, no decent pans or oven trays and bookshelves groaning with endless volumes on Byzantine and Renaissance art and architecture and a weighty autobiography of Margaret Thatcher.

All completely useless and as hostile an environment as Man United playing away at Chelsea. And nothing faintly useful to me like a cookery book.

So for my not-so-special dinner party, I had no help from the library, knives blunter than a Yorkshire bigot, a malfunctioning fridge, and an oven that blew hot and cold like a dame in a Raymond Chandler story.

“A bad workman blames his tools”, lisped a very funny and show stealing Wayne Sleep. Too damn right I do.

I finally served up my scallops starter, spicey chicken main course and my champagne jelly that I had to put on a window ledge outside to set because the fridge was knackered.

At 1am, having again consumed five bottles of champagne, a quarter bottle of rum and an Irish coffee containing a triple measure of whiskey (Jameson’s, of course), I was interviewed about my night and how it had gone and managed to slur a couple of inebriated sentences. You can see a pattern emerging here.

The following night, it was off to snowy Essex and the WAG’s palace shared by Danielle Lloyd and her then live-in lover, footballer Jamie O’Hara.

After cooing over her new baby and seeing Jamie’s games room, we settled down to the serious business of polishing off four or five bottles of champagne in various cocktails and eating the food Danielle had prepared. Her rice was like bullets and her broccoli was hard as a rock and had just looked at a hot pan. Pretty dreadful.

Drunk and unable to articulate enough for a proper conversation, after pudding I disappeared with Jamie O’Hara for over an hour to play FIFA 2011 on his Playstation. I couldn’t focus on the screen very well given the fact that I was completely drunk again. Man United lost all three games to Spurs.

“Terry, can we have a few words?” Blimey, I thought, it’s slurring time again.

The final night was at Wayne’s incredible gaff in Kensington complete with dance studio, a pilates gym the size of a small leisure centre, and original David Hockney paintings. Wayne had been his muse back in the 60’s and they were still great friends.

I was the first to arrive and was both horrified and impressed that Wayne actually had a drinks bar in his huge living and dining room.

You can guess the rest.

Vodka cocktails followed by five bottles of champagne, vintage red wine and, so drunk none of us cared by then, a whole bottle of vintage port all polished off.

Again, I was interviewed last and then went to drink more with Wayne and his boyfriend Jose in his kitchen after the most drunken interview of all and the other guests long departed.

Finally, at 2.30am I somehow managed to get into a cab that had been waiting for me for 90 minutes and went home.

“That’s me,” I thought. “Always the bridesmaid, never the bride.”

It’s enough to drive you to drink. As for hangovers, this was a Sunday night. I felt bad until Thursday. Come Dine With Me? It was more like a four-day stag weekend.