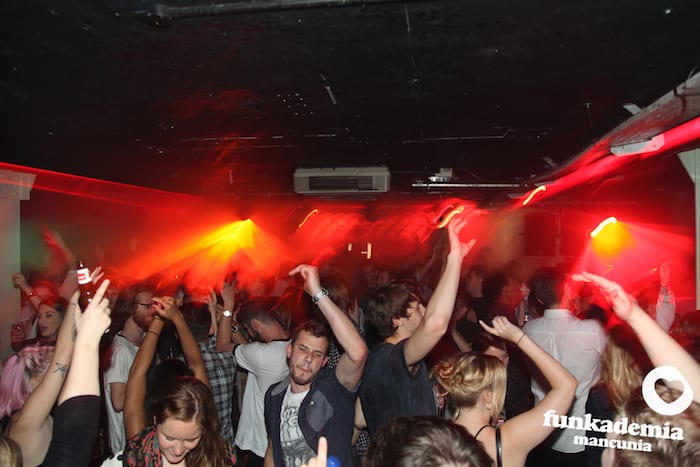 Being the longest-running club night in Manchester is certainly something to have a song and a dance about – and for the past 21 years Funkademia has been doing exactly that. The city is known for its underground club nights, but while the halcyon days of the Hacienda are long gone and with Sankeys swapping house music for actual houses, it’s still out there delivering the goods.

Every Saturday, revellers are treated to five hours of pure disco, soul, funk, hip-hop and classic house music from Funkademia’s collective of DJs, making it one of the most vibrant spots in the city. The night is a mix of era-defining tunes from the likes of Grandmaster Flash and The Mary Jane Girls, while there’s also plenty of new age R&B talent on show to complement the classics.

What sets this club night apart from the others is the crowds. Funkademia attracts people of all ages and walks of life – all united by their love of getting down and boogying the night away. That small group of four people you’re out with will feel like four hundred after everyone meets on the dance floor and moves to the same hypnotic beat.

As for the venue, Mint Lounge is an ideal location. It’s well spaced out and has plenty of room to manoeuvre, while the darkly lit setting provides for an intimate, edgy and soulful atmosphere where people feel comfortable enough to dance like nobody’s watching – exactly how all good club’s should be.

Regular partygoers will be familiar with the music, with influences from black music culture being a returning theme. This is no coincidence, according to founder Dave Payne, who says his inspiration for the club night came from his younger days when he and his friends would regularly visit black music nights in the city.

“We had a passion in soul, funk and hip hop but there was a dearth of these nights in the city. These were the days of the Hacienda and ‘Madchester’ and house music was predominant, so we thought it would be good to do something different. Originally it was supposed to be a one off night, but now all these years later we’re still here.”

After 21 years in the making, there’s no signs of slowing down and the legendary club night is set to take on Ibiza for a weekend of soul, funk, sunshine and sunsets. It was Ian Brown who famously said Manchester had everything but a beach, but between the 17th and 21st of May it most definitely will have when Funkademia takeg to the White Isle.

Guests will get to experience the stunning resort of Cala Vadella on Ibiza’s sunset coast where they can unwind, dance and have fun in the sun. They can also expect an inclusive buffet breakfast, access to the day and evening sessions, plus plenty more.

Funkademia regulars will no doubt be happy to hear that all the resident Funkademia DJs will be in attendance to provide the perfect Ibiza backdrop over four incredible days and nights. Not only that, but guests can enjoy poolside chill outs during the day, cool beach sessions in the evening and full on funkademia gigs nightly. What’s not to love?

If Manchester is a city that’s defined by its nightlife then it’s no surprise that Funkademia has been leading the way all this time. It’s Manchester through and through.

Tickets for Funkademia De la Sol are priced between £240 and £290 and are going fast so make sure you get yours early at funkademiadelasol.co.uk