Captain Manchester is back, bringing random good deeds to the city centre 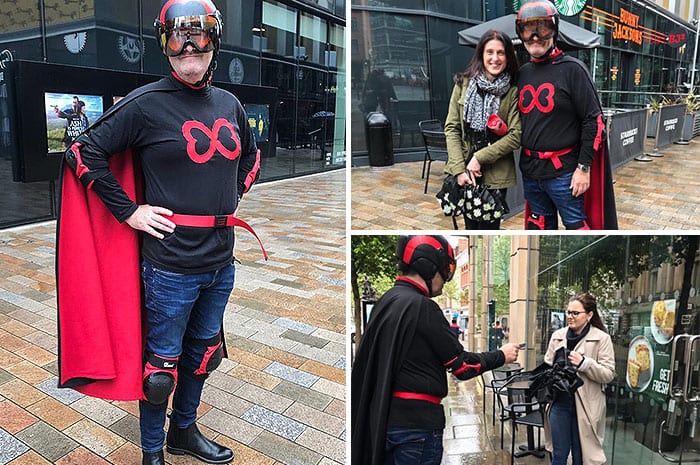 If you’re in the city centre next month, keep an eye out for Captain Manchester. He’ll be taking to the streets to bring cheer and good deeds to the residents of this wonderful city.

Captain Manchester was originally designed as a marketing stunt for Forever Manchester in 2013. The campaign involved a man dressed as a self-styled ‘superhero’ taking to the streets of Manchester to spread love and good deeds throughout the city.

The character was presented as a real person. His adventures were documented on Twitter and became a viral sensation, reaching over 10 million people and making the press in over 40 countries.

I have the role on behalf of @ILoveMCR next month. What should I do with such super power and responsibility?? pic.twitter.com/wtsWloGrjS

The campaign is managed by Tunafish Media, who created the character and the initial campaign. It launched on 8th May with Autotrader UK completing the first takeover.

Forever Manchester is the only charity that raises money to fund and support community activity across Greater Manchester. They work alongside local people in our communities by inspiring and encourage projects that make neighbourhoods happier and safer places to be. All the money raised is used to fund over 1,000 community projects in Greater Manchester.

“We’re really happy to be relaunching and raising the profile of Captain Manchester once again,” said Forever Manchester chief executive Nick Massey. “We’d like to say a huge thank you to all the businesses who are getting involved and we’re excited to see all the ways they can work with The Captain to spread his message of kindness and create lots of smiley faces around town.”

Captain Manchester is sponsored by Zen Office. You can follow the Captain’s exploits on Twitter at @Captain_MCR. You can find and support Forever Manchester by clicking the donate button below.