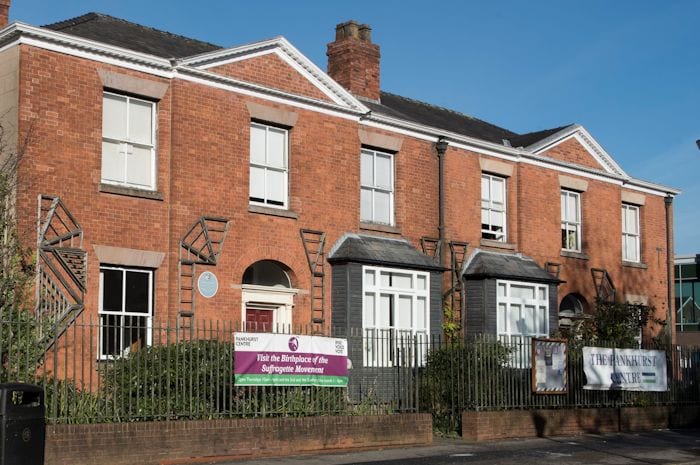 The Pankhurst Trust is encouraging Mancunians to support a crowdfunding campaign to create a Suffragette Garden to mark the centenary of the first women achieving the right to vote.

The garden, which will be on the site of the former home of Emmeline Pankhurst and her daughters, will stand both as a horticultural monument to the work of the movement for women’s equality 100 years on, and as a living sanctuary for women in need today.

The back of the building provides a unique outdoor space, but the area needs a complete overhaul to transform it from a neglected and overgrown plot into a loved and cared-for haven in the heart of the city.

“The Pankhursts were amongst those who led the march to achieve change in the name of gender equality, the influence of which is still with us today,” says Elaine De Fries of the Pankhurst Trust.

“They are daughters of the radical city of Manchester, which has a rich history of political activism and involvement in the struggle to achieve equality for all. Their legacy is felt in so many ways; the lasting impact of the way in which they went about fighting for their cause, their absolute dedication, their sacrifice, and their ultimate success in achieving the vote for women.

“As campaigners what they did and achieved continues to inspire, but there is a great depth to their story that we hope that the 2018 centenary will give the opportunity for people to further explore and understand.”

There is a long-standing connection between gardens and the Suffragettes. Flowers were often worn by women within the movement to symbolically challenge the view that women could not be both feminine and political. The garden will be designed to reflect and explore this historic link to tell the story of 100 years of women’s protest.

“Suffragettes communicated a strong visual message, using the way they dressed to make sartorial statements,” explains Elaine. “Whilst the press published taunting cartoons of women with masculine clothing and thick-rimmed glasses, the activists themselves opted to rail against this caricature, exuding high fashion elegance at all times.

“As part of their attire, flowers were often one important element of this and another way of carrying through the colours of the movement.”

The Pankhurst Trust is made up of the Pankhurst Centre, a small museum telling the story of the fight for women’s equality, and Manchester Women’s Aid, a charity providing housing and practical support for women fleeing domestic violence and abuse.

“Since the time of the Pankhursts’ activism, women have edged closer and closer towards achieving equality,” says Elaine. “However, our work continues to highlight that there is still a long way to go in all areas of society.”

Most difficult to comprehend is the startling fact that two women are killed in England and Wales each week as a result of domestic violence, whilst one in four will suffer domestic violence in their lifetimes.

“It continues to be the case that it is by taking a campaigning-led approach that women are making their voices heard, as the Gender Pay Gap issue highlights,” says Elaine. “The movement continues to be led and championed by strong and courageous women of today, just as it was centuries before.”

To help make the ambitious vision for the Suffragette Garden a reality, the Pankhurst Trust has launched a crowdfunder, which aims to raise £20,000.  Those making a pledge will be recognised in different ways, from an invitation to the launch of the garden, to the addition of their name to a plaque within the design.

The Trust intend the garden to be a therapeutic space that women and their children who have experienced domestic abuse can enjoy and regain their well-being and sense of place in.

“2018 will mark a century since the first women gained the right to vote in the UK and yet, 100 years later, this fight is still as relevant as ever, with women who are the victims of social injustice needing our help on a daily basis,” says Bex Shindler from the Pankhurst Trust.

“The Suffragette Garden will be such an incredible legacy, not only symbolically but also practically, providing a tranquil and reflective space for women and children, many of whom have experienced great trauma within their lives.

“By pledging support, you will become an indelible part of the Pankhurst Centre’s story past, present and future.”