BUSBY review: new film from the makers of Class of 92 is another winner 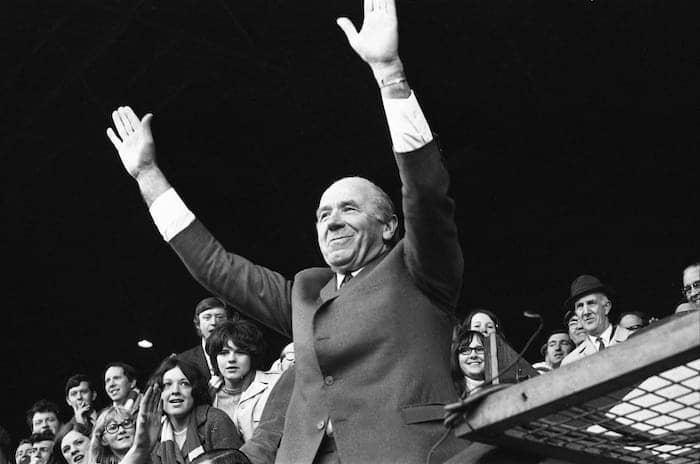 It’s probably the worst time in 30 years to be a Manchester United supporter.

The worst start to the season since 1986; owners who, many believe, are more interested in commercial success than winning trophies; a CEO who has no experience of running a football club; an unproven manager who looks out of his depth; and players who seem to care more about the money than the club.

Younger fans who have known nothing but success may find it hard to believe, but Manchester United weren’t always the football superpower which dominated the domestic game under Sir Alex Ferguson.

They came close to bankruptcy on more than one occasion and went through times when they could hardly win a game, let alone a trophy.

The man who saw the club through some of its darkest days was Matt Busby.

He first came down to Manchester in 1928 as an 18 year old, ironically to play for rivals Manchester City before moving on to captain Liverpool.

He was appointed United manager after the Second World War with no previous experience. The club had spent much of the 1930s in the Second Division and didn’t even have a ground because Old Trafford had been bombed during the war.  They had to play their home games at Maine Road until 1949.

Busby had an immediate impact. In his first five seasons in charge, United finished runners-up on four occasions. In his second season, they won the FA Cup – the club’s first trophy since 1911. In his sixth they won the League.

He replaced ageing players with young players who had come through the club, winning two more titles in 1956 and 1957.

They were so successful that before the Munich air crash he only made two big signings – Tommy Taylor and Harry Gregg.

Under Busby, United became the first English club to take part in the European Cup, against the wishes of the Football League.

He was so badly injured at Munich that he wasn’t expected to survive. But he recovered and rebuilt the side, winning another two league titles and an FA Cup.

His finest hour came in 1968, when United became the first English club to win the European Cup.

Busby was awarded the CBE in 1958, was knighted after the European Cup victory and made a Knight Commander of St Gregory by the Pope in 1972.

In his 25 years with the club, he built three great teams and is considered one of the greatest managers of all time – and the greatest ever by his friend and rival, former Liverpool manager Bill Shankly.

Not bad for a man from the humblest of beginnings in a small Scottish mining village.

Busby is the definitive account of how he transformed Manchester United from the second best team in town into one of the world’s biggest and most successful football clubs.

It’s the latest film from the makers of Class of 92 and Bros: After the Screaming Stops, and, as you might expect, it’s another winner.

The film is light on his early career as a player and the years after he retired, focusing instead on his time as United manager, his triumphs and tragedies. And it may bring a tear or two to the eye.

It features interviews with those who knew him best, including former players like Denis Law, Alex Stepney and Johnny Aston and biographers Michael Crick, Patrick Barclay and Eamonn Dunphy.

His story will be familiar to older fans. But unless you’ve read every single book about the man, there will probably be an anecdote or two you’ve never heard and film clips you have  never seen, including TV interviews with Michael Parkinson, Cliff Michelmore and Frank Bough and clips of Busby smoking a fag on the bench and on an open top bus, presumably celebrating Man City’s 1934 FA Cup win.

Busby may have been surpassed by Sir Alex Ferguson for trophies and longevity, but he laid the foundations for what Ferguson built on and what United became – not just the most successful club in English football but a commercial powerhouse.

If you enjoyed Class of 92 you’ll love Busby.

It’s a reminder of why there’s a statue of him outside the ground. A reminder of the blood, sweat and tears he shed to build the club.

A reminder of what football – and Manchester – used to be like.

A reminder for younger fans that things have been much much worse in the past and that the club has recovered.

And a reminder that when Busby retired, the club went into a period of decline. It took almost 20 years to replace him. Sound familiar?

Busby is in selected cinemas from 11th November. Own it on digital from 15th November and DVD & Blu-ray from 18th November.