The north's first craft beer hotel, DogHouse Manchester, has opened its doors to beer loving guests and their four-legged pals 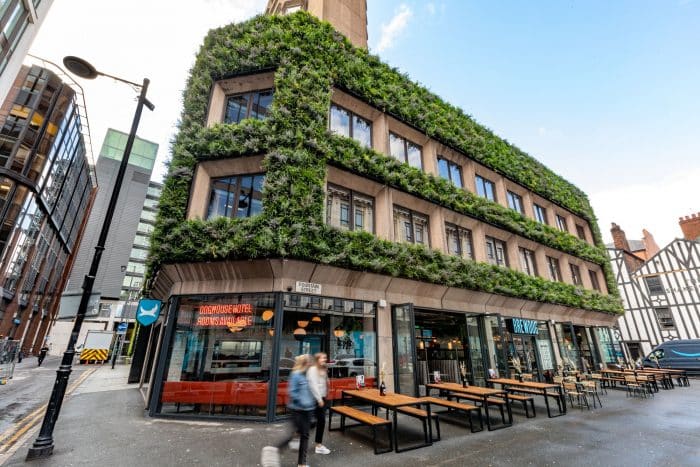 Manchester is often a city of firsts and now it’s home to the north’s first craft beer hotel with DogHouse Manchester.

The news of BrewDog’s hotel was first known in November last year, but now the shrine to all things craft beer has opened its doors to the public – and their furry pals.

Located in the heart of Manchester city centre, the carbon negative hotel offers 18 rooms with bespoke touches including in-shower beer fridges, draught beer taps and a fully-loaded mini-bar, plus an epic taproom with 30 taps of craft beer and a rooftop bar perfect for stargazing.

This isn’t the first time the craft beer giants have dipped their toes into the hotel world either, DogHouse Manchester follows the opening of DogHouse Columbus in Ohio in 2018, and The Kennels – a series of city-centre mini-hotels – in Columbus and Aberdeen in 2019.

The full BrewDog immersive experience is promised to guests from the moment they arrive with free beer on arrival alongside a state of the art music system including a vinyl selection from Piccadilly Records celebrating local Manchester artists. And of course, the hotel is dog friendly so four-legged pals are more than welcome and are treated to a dog bed, water bowl and plenty of dog treats.

The celebration of all things beer and brewing doesn’t stop just with the rooms for guests either. DogHouse Manchester boasts a complete rooftop bar with ten different taps to suit all tastes and a its own taco hut. If you’d rather get your fill of tacos and pints in the comfort of your room, there’s room service with a mouthwatering menu of wings, burgers and treats from 7am-10pm as well as 24-hour hotdogs available too for when those early morning munchies strikes.

BrewDog has been known for its sustainability focus and its approach to DogHouse Manchester is no different. There are initiatives to promote a more sustainable stay including free Brompton bike hire as well as a free beer reward scheme for reusing your room towels.

As a further nod to BrewDog’s ultimate goal of carbon negativity, a living plant wall has been installed. The wall features 26,000 plants and is part of BrewDog’s continued efforts to be a business striving for a more sustainable world as part of its recent certified B Corp status.

Speaking about the latest hotel venture, BrewDog co-founder James Watt said: “DogHouse Manchester marks a new era for the craft beer revolution. In the last ten years, we’ve turned the craft beer scene on its head and are once again demonstrating the power of beer.

“As always, our army of Punks fuels every mission and the DogHouse is just a small part of the epic journey we’re making together.”

He continued: “From welcome pints of Punk, to in-shower beer fridges; The DogHouse is our gift to the passionate and dedicated army of beer fans that have supported us every step of the way. We are nothing without our community and this hotel celebrates that…and where better to do it than in one of the UK’s greatest cities?

“With our DogHouse, we want to inspire a new kind of hospitality experience, combining our biggest passions: travel and incredible beer – with sustainability at its core.”

For beer fans keen to try the DogHouse Manchester, there are a variety of experiences and packages ranging from £25 up to the ultimate package at £150. Guests can add thoughtful touches to rooms such as a fully stocked shower beer fridge by paying £25 ahead of checking in – perfect if you’ve had a long journey.

For those who want to upskill their brewing knowledge and geek out over BrewDog’s beer, they have the Beer School Experience with a ‘beer masterclass’ which includes tastings and merchandise. Or guests can take it one step further and become ‘the master of malts’ with a full day at BrewDog’s Outpost Manchester brewpub learning how to make beer with BrewDog’s knowledgeable head brewer as well as lunch and beers.