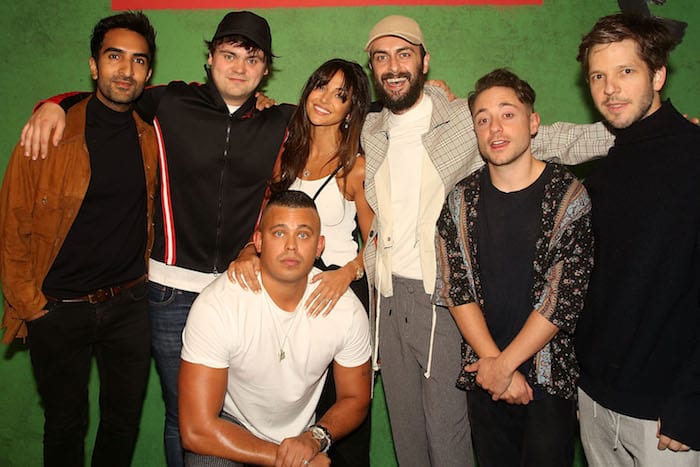 Created by star Joe Gilgun and written by Manchester’s Danny Brocklehurst, Brassic is a new comedy show about a group of working class lads from a small northern town.

The lead characters are Vinnie (Gilgun), who battles with bipolar disorder, and his best friend Dylan (Damien Moloney), who’s torn between loyalty to his pal and his responsibilities with girlfriend Erin (Michelle Keegan).

Together with a gang of friends that includes strongman Ashley (Aaron Heffernan), sexually liberated Tommo (Ryan Sampson) and soft-hearted Cardi, short for Cardiac Arrest (Tom Hanson), Vinnie and Dylan are constantly getting into less than legal scrapes. There’s car theft, weed distribution, and, in the opening episode, the purloining of a tiny horse.

On the evidence of the first episode, the show, which has been largely filmed in locations across Manchester and Salford, is filled with loveable characters, laugh-out-loud comedy moments, and a lot of heart.

The Manchester preview was followed by a decidedly raucous 45-minute Q&A with writer Danny Brocklehurst and the entire cast, including Joe Gilgun and Michelle Keegan.

The show is based on Joe’s own experiences growing up in Chorley. However, during the Q&A, he admitted that he couldn’t exactly confirm what did and didn’t happen in real life because there’s “a lot of sh*t” he could get in.

“Let’s just say we had to talk to legal about it all,” he laughed.

But pressed on whether he and his friends did ever actually steal a tiny horse, he says: “You know, let’s not go there. Let’s just let sleeping dogs lie, I think. It’s not cool to talk about it.

“I know middle-class people love hearing about that sh*t, but I can’t go there with you. Me and Dan [Joe’s best friend, and the character Dylan is based on] and Dave [Brocklehurst] know and I think that’s just enough people, to be honest. Loose lips, you know what I mean?”.

One autobiographical note that Joe is keen to talk about, however, is his own experiences battling bipolar disorder.

“The scenes with Doctor Chris [played by Dominic West], they’re funny. I want you to be able to laugh at the condition and it not be this thing where there’s this toxic masculinity about it, talking about your problems, like it makes you weak. I don’t get it.

“It’s 2019 – I can’t understand that mentality any more. We’re living in an age where you should be able to talk with each other and I want to be honest. This affords me that opportunity.

“If I can be honest with the nation and go, ‘listen, I am a f*ck-up, I’ve got serious problems and I don’t know the answers’, and if you can still like me and the gang at the end of that, then maybe I’m worth it, maybe I can really believe that in myself.

“I just feel that it’s important. I’m in a position where I can raise awareness, and I really don’t give a f*ck what people think.”

As Joe notes, the scenes where Dominic West plays Vinnie’s doctor are among the funniest in the opening episode. As to how he got involved, Joe says the pair became friends during the shooting of 2014 film Pride.

“So I’d tell him these stories about some of the sh*t I’d get up to, and they’d been practised over many years, some of these stories. And he said, ‘listen, it’s no good telling some posh dickhead on a f*cking balcony – why don’t you do something with it?’.

If the reaction from the preview is anything to go by, the show is certain to resonate with audiences when it hits Sky One this Thursday.

After the screening, audience member Matt from Manchester said: “I thought it was great – I laughed my arse off!”, while Mike from Ashton said: “It seems a bit crazy. I can sort of relate to it, to be fair.”

That relatability was also something that appealed to Joe’s co-star Michelle Keegan.

The fact that it was based in Manchester and “a northern show” was also a big factor in Michelle taking the role.

“I’m really proud to be northern,” she said.

“I’d worked with Danny before so I knew his scripts would be brilliant. I read them and I literally laughed out loud and I just right then thought this is something that I want to be a part of. And I’d never done comedy before, so it was something new to me as well.”

It’s fair to say that if the remaining five episodes are as funny as the first, then audiences, northern or otherwise, are in for a real treat.

Here’s hoping for a second series.

Episodes 1 and 2 of Brassic debut on Sky One on Thursday 22nd August at 10pm, with all six episodes available to stream immediately afterwards.