Bourbon, Bonbon and Barrels at The Oast House 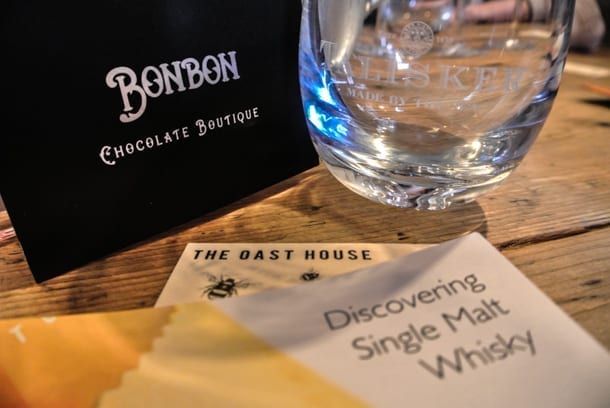 Laura Fell goes whisky tasting in Spinningfields. Will she be cured of her dislike of the drink?

In the middle of Spinningfields, just off The Avenue North, lies The Oast House – a not-so-traditional pub slap bang in the middle of high end shopping boutiques and posh restaurants alike.

Known for their ever expanding selection of craft beers and ales and famed for their hanging kebabs, a sunny day in Manchester renders The Oast House the most likely of haunts for all. From the lads’ all dayer to ladies who lunch, Mancs come flocking for food inspired by the deli, rotisserie and BBQ and the live music and entertainment that can be found here every night.

The Oast House has been one of my hangouts for years and I have always wanted to attend one of their events. Their Ale and Beer tasting Masterclass, for example, provides a 90 minute opportunity to try up to eight different beers and ales of your choice from around the world. It’s definitely on my list.

One Monday evening, I went along to a Whisk(e)y and Chocolate tasting event. 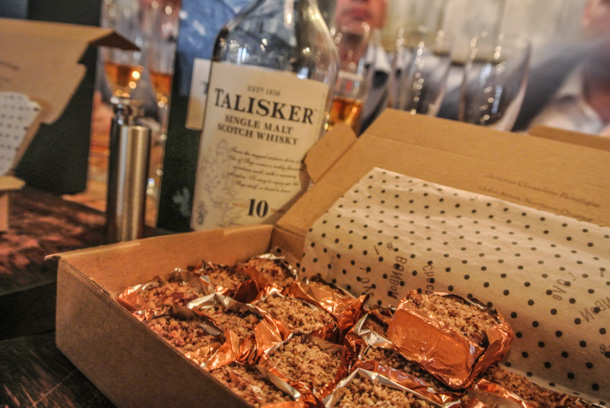 Now, I’ll be frank, I know nothing about whisky, apart from the dreadful hangover it gave me as a teenager after swiping half a bottle from my parents liquor cabinet circa 2003.

Since then whisky has always worried me. The burn in the back of the throat, the warm feeling as it flows down, and the fact that I have always considered whisky to be the tipple of choice for the sophisticated older gentleman or my granddad. It isn’t usually seen in the hands of a 20-something- year old.

‘Can I eat my
chocolate yet?’

After being advised that whisky is an acquired taste, (kind of like olives, which I HATED but now eat all the time, definitely more than the average person), I decided to give it a go. Maybe I could learn to fall in love with this drink, like I did with olives, as so many women already have.

Second confession. As soon as I heard that Bonbon (my favourite Manchester chocolate boutique from the NQ) would be catering the chocolates, it was well worth the fee for the entry ticket alone. The artisan chocolatier and café sells fine chocolates, truffles & treats (all produced on the premises) in a tiny, but exquisite venue just off Thomas Street.

A packed Oast House catered to 20 attendees for the Whisky and Chocolate event. I started to feel a bit out of my depth when the host for the evening, James Hill from Diageo, poured four different whiskies into the four empty glasses in front of me. 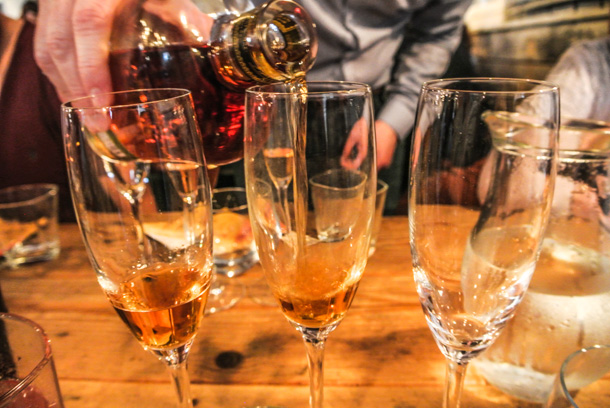 My thoughts at that moment were as follows: surely I won’t be drinking ALL of these?! Am I even going to be able to tell the difference between them? Am I going to have to nod along with the crowd and pretend, ‘Oh yes, I can taste the honey in that one!’ And finally, can I eat my chocolates yet?

Unless you’re a whisky connoisseur then you probably think like me. Naïve, I know. But whisky is whisky, right? Wrong!

I started with a 7 YO* Bulleit Bourbon and a Bulleit rye whiskey. Both aged in new American charred oak barrels for a minimum of two years. Next up was a Single Malt – Singleton of Duffton 12 YO and then finally a Talisker 10 YO. Both Scottish and both with excellent stories behind them.

After taking a huge whiff of each of these whiskies in turn, I was instructed to take a sip and hold the liquid on my tongue for a good few seconds before swallowing. This seems to be the way it’s done, so I went along with it. Taking in a deep breath after a small gulp, I was surprised. It was nothing like the fifteen year old me remembered of the stolen ‘drink in the park with your mates’ whisky that got me grounded. 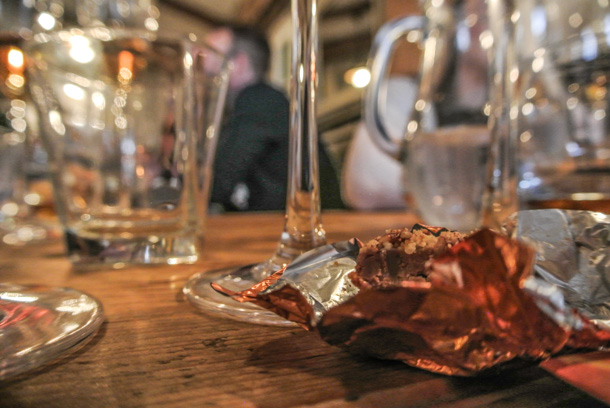 This was nice. After a few deep breaths, the flavours from each of the different whiskies started to come through. The bourbon gave off subtle hints of vanilla, cinnamon and butterscotch. Paired with a delightful salted caramel pecan from Bonbon, I even had to take another sip of my whisky to finish it off!

The Single Malts were smoky and peppery and really got you at the back of the throat. The soothing chocolate truffles only emphasised the flavours.

It turns out Laura likes whisky. Who’d have thought it?

The Oast House runs regular events like this. 29th July sees the first Disaronno terrace at The Oast House, so why not bob along and try an event for yourself?

* Not the informal exclamation that is used to greet someone, attract their attention, or express excitement but ‘year old.’ The age of the whisky, or how long it’s spent in the barrel, impacts on the flavour and price.