The Blue Pig Reviewed – Piggin’ Out In Style

From the same stable as Odd, Odder and Oddest... 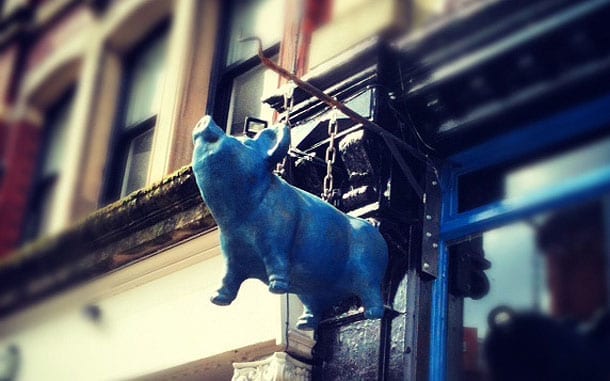 Here at I Love Manchester we have the ‘love-ometer’ review scale which ranges from ‘it is you’ to ‘I’ll marry it’ and the Blue Pig has marriage material written all over it.

In fact I lost count of the amount of times I heard ‘that’s the best (insert food item), I’ve ever had’, it’s almost embarrassing.

From the same stable as Odd, Odder and Oddest, and sharing executive chef Denial Barber this latest eatery from Cleo Farman opened its doors a couple of months ago in High Street, the Northern Quarter.

Inspired by a trip to Paris, Cleo thought whatever the city of romance can do, Mancs can do better, and has created an eclectic deli-style menu of contemporary European cuisine where you can buy existing sharing boards from £8.95 or build your own. In fact there is even a deli counter in this vibrant bar/restaurant.

There is also the ‘333’ menu where you can choose from 3 starters, mains and desserts for just £20 and which changes every Thursday to make the most of seasonal produce.

I went with the Gay and Ginger to try out all it has to offer on a bustling Friday night and we bagged a corner booth – word of warning, some tables are set in the heart of the bar area and I would have found that irritating when eating but there are plenty of booths away from the bar bustle. 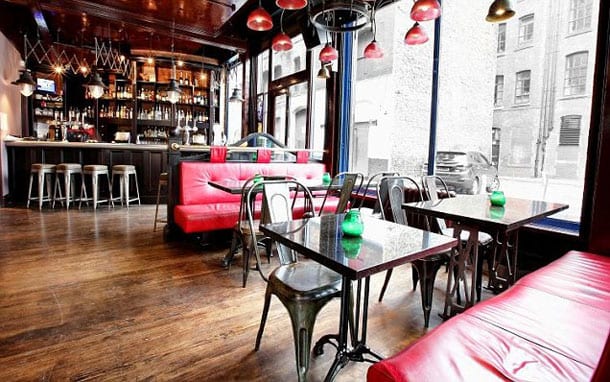 Our lovely waiter Ollie was extremely attentive without being in your face and ensured the very reasonably priced Prosecco (£19 per bottle) was properly chilled. Ginge and the Gay both had manly lagers of which there is a big choice as well as house wines from £13.50 and cocktails from £6.50.

All the breads, chutney, jams, pates and pickles are made on the premises and we tucked into scrummy warm-cakey ‘Leffe’ bread and roasted hummus to stave off hunger pangs whilst waiting for the gay who was late (again).

The Gay. being a picky eater, opted to pick with a sharing board to himself and the words ‘surprise me’ but making it very clear he did not want to be surprised by calamari, pickled herring, vegetable terrine and various other delicacies.

What came brought pleasurable groans and kept him quiet for a while. He pronounced his Escehebeche of sardines (pickled on the premises) wild mushroom and apricot terrine and ash-rolled goat’s cheese as sublime.

The Ginge and I plumped for the 333 menu and I was in a fishy mood, starting with seared Atlantic scallops, which were plump and perfectly cooked, delicious with the roasted garlic, cherry toms and caramelised lemon.

This was followed by seared tuna in a creamy borlotti bean and spring onion cassoulet which melted in the mouth with a delicious burst of flavours.

The Ginge tucked into perfect parma ham with, in a subtle but tasty twist, pan fried melon and served with focaccia and balsamic dressing.

He followed this with the roasted vegetable tarte tatin to see how the Blue Pig does veggie and the answer is very well. Probably not his first choice (being from Swinton and that), he loved it. Pronouncing the pastry gorgeously buttery and the veg so tasty that he was actually glad he chose it.

Chris, the man who once had four Christmas dinners in the same day, was the only one who still had room for pudding and opted for sticky toffee pudding which he declared was the ‘best sticky toffee pudding’ he has ever had. Being a bit exotic for Swinton, but the sentiment is there.

Overall a fantastic meal, with flavours, tastes and prices that should have many a fine dining establishment hanging their heads in shame. We would definitely marry it.

The Blue Pig is open from 10am to midnight and until 1am on Fridays and Saturdays. Serving breakfast, lunch and dinner.