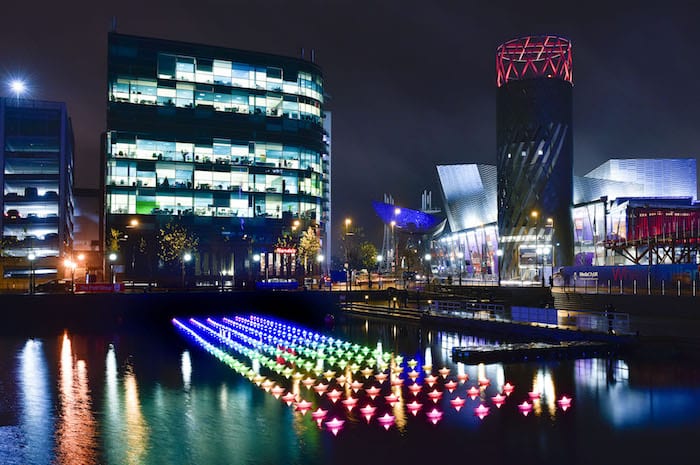 The UK’s biggest digital light festival, Lightwaves 2016, has launched at Salford Quays and MediaCityUK, lighting up the dark winter nights with nine free light experiences across The Quays from the Plaza to MediaCityUK’s Piazza – and even in the River Irwell.

Part of the display showcases items from Blackpool Illuminations’ light collection including iconic children’s characters Noddy, Postman Pat and SpongeBob, and, in a nod to the fact that MediaCityUK is home to the BBC, the Daleks and Tardis from Dr Who. 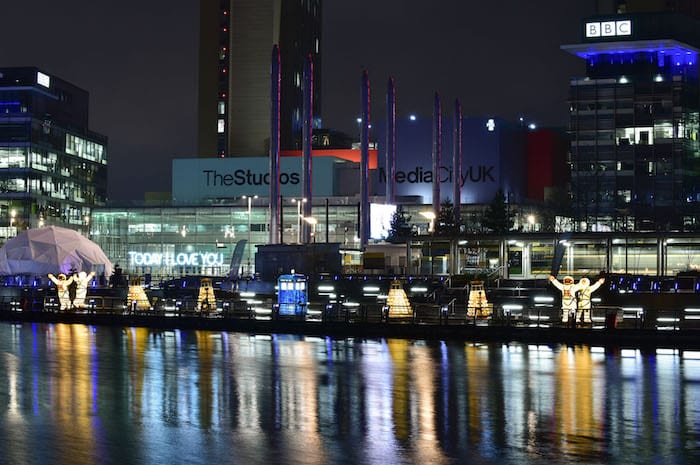 Other installations include Heart Beat, part of a series of art installations using mixed lighting media to create the symbol of a heart.

From one angle Heart Beat is an animated 3D heartbeat pulsing through the sculpture. From another angle, the lights join to form a heart. For the heart to appear spectators are encouraged to make a connection of love, or friendship, by joining hands in front of the sculpture. Once the connection is lost, the heart is broken into fragments again.

Fireflies is a series of floating illuminations which interact with their surroundings as they ‘fly’ amongst those who visit them. Consisting of hundreds of illuminated LED spheres that seamlessly float, the installation interacts with the public as its fire-like embers swirl forming a connection, which is organic, yet synthesised, mechanic, yet fluid.

A first-time showcase for Salford Quays and MediaCityUK, Voyage comes to the area as part of its global tour. Created by Aether & Hemera – a multi-disciplinary art and design studio, producing contemporary lighting art and interaction design – Voyage features 198 origami boats designed to engage with the public and transform the waterfront. 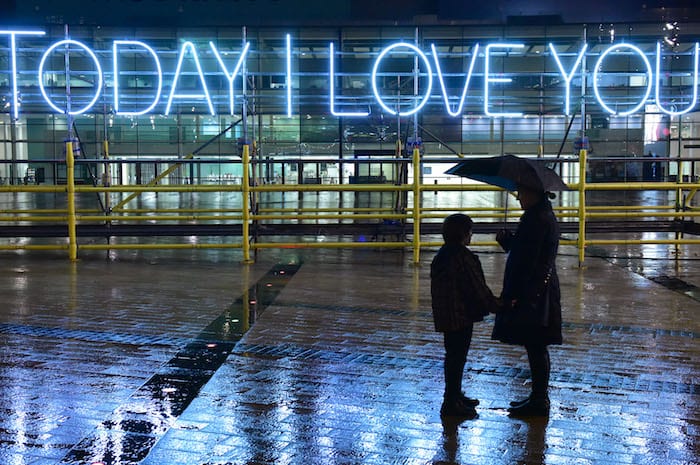 The fleet composes an organic matrix of interactive lights, which change colour when passers by interact with it on their mobile phones. The public can transform the pattern and colour of the paper boats by connecting their mobile device to Voyage Wi-Fi network and opening their browser to access Voyage.co.uk. Users will be given a choice of artworks to interact with, such as a rainbow or the night sky. Choosing an artwork option will change the colour of the boats in the water.

Each footstep is created from artificial grass and embedded with lights, representing the path each of us walks. Edyta Masseur is the artist behind Laiki#5 – fluorescent fishing lines are suspended within a structure and fitted with contact microphones. This interactive installation creates air vibrations, when the strings are plucked, creating sound, like that of a harp.