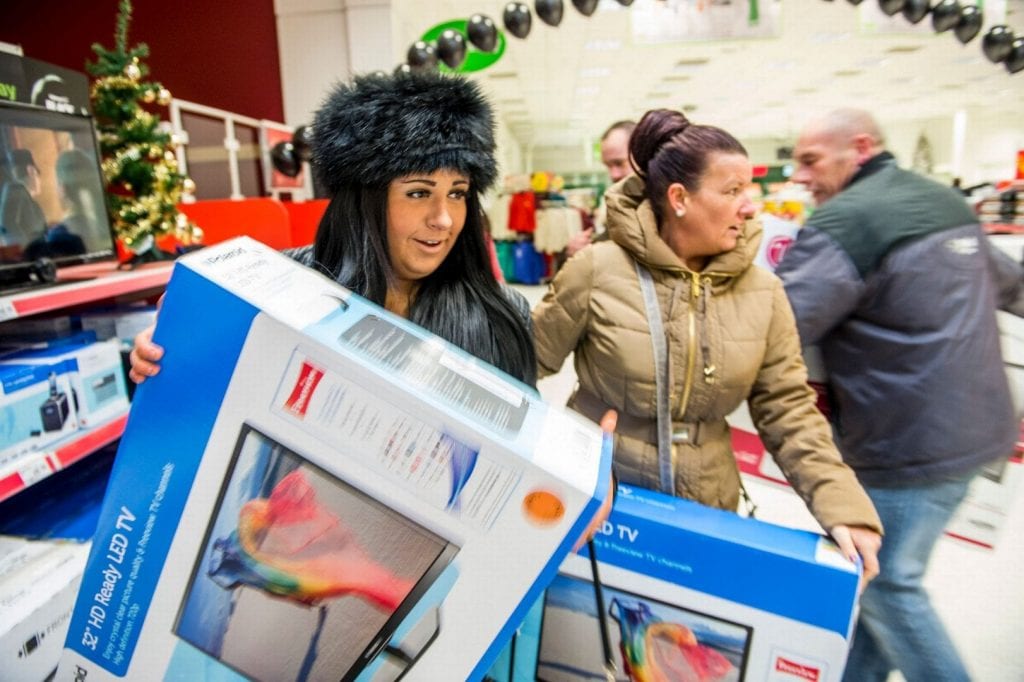 What is Black Friday? The term used to be a negative but later turned to a positive. The day’s name was originally used to describe the heavy and disruptive foot flow and traffic which would occur on the day after Thanksgiving. “Black Friday” now indicates the point at which retailers begin to turn a profit, or “in the black”. It’s the Friday following Thanksgiving in America, often regarded as the beginning of the Christmas shopping season.

“…the biggest shopping weekend
of the year…”

With tomorrow’s Black Friday set to be the biggest yet, city centre retailers are offering shoppers incredible deals on items in-store in the run up to Christmas.

Ahead of what is being hailed as the biggest shopping weekend of the year, stores across the city centre have announced discounts of up to 70%, although some are set to keep deals under wraps until tomorrow morning. To keep up to date with all the latest deals and discounts on offer across Manchester city centre, follow @ShopMCR.

The city’s department stores are pulling out all the stops this year offering huge savings across all departments.

Asda‘s deals include a 40 inch TV, smart phone and quad bike. People expected to queue outside their Trafford Park and Eastland stores from the early hours. In-store only deals include:

House of Fraser will be launching seasonal savings on Thursday 27th November with up to 40% off selected items, which will increase up to 70% off selected lines across its fashion, beauty and home departments on Black Friday (28th November). Example deals include:

Selfridges Exchange Square will be enticing shoppers with a fantastic 20% off their Christmas shopping and 10% off Beauty, Fragrance, Watches, Wine, Tech and Toys (Thursday 27th – Sunday 30th November). Perfect for finding your hearts most – desired gifts. Visit Selfridges.com for more information.

Manchester Arndale has a whole host of unmissable deals* including 15% off all gift sets at The Fragrance Shop, 20% off at Ann Summers, 30% off at Coast, up to 25% off at Jack & Jones, 20% off clothing and 10% off travel at Mamas and Papas, up to 40% off at Schuh, free makeovers at Boots and complimentary prosecco and chocolates at Goldsmiths with a bounce back voucher if you spend £150 or more over Black Friday weekend to receive £50 off your next purchase which can be redeemed in the New Year.

Elsewhere in the city, Cath Kidston on King Street is offering its customers 15% off everything in-store (Friday 28th November) while Moss Bros in St Ann’s Square is offering 20% discount on all ready to wear, hire and bespoke tailoring.

If you’re looking for a gift for those who like to be pampered, or just to treat yourself, L’Occitane is offering a complimentary luxury gift set worth £15, with any purchase of £30 or more. While bath, body and beauty connoisseurs Molton Brown are offering 20% off everything in-store. If customers spend over £80, they’ll receive a further 25% off (Friday 28th – Sunday 30th November).