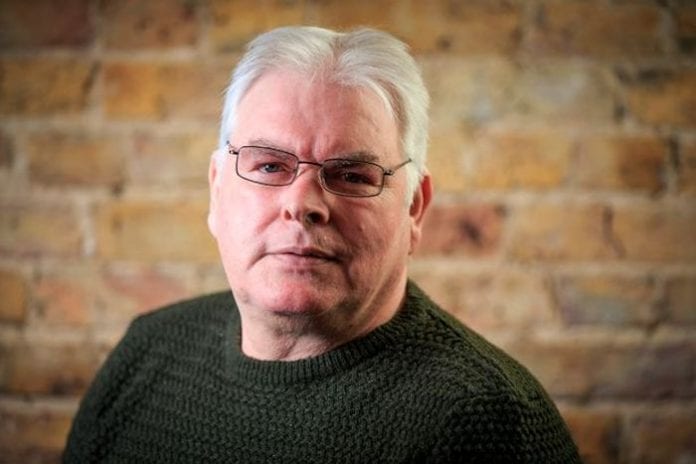 Best-selling author Tommy Rhattigan is aiming for the top of the charts again. But this time it’s not a book he’s written. It’s a song.

Proceeds from sales of Christmas Wishes will go to a number of charities and organisations which help Greater Manchester’s homeless.

Tommy is no stranger to hardship. He is currently writing a sequel to his book 1963: A Slice of Bread and Jam, a harrowing account of his life as a seven year-old surviving crippling poverty and abuse in the slums of inner city Hulme.

As well as being a best-selling author – the book has sold over 50,000 copies – Tommy is also something of a poet and songwriter.

He has co-written a song with former 10cc star Graham Gouldman but takes most pride in Beating Heart, which has been performed live for the past four years by a full orchestra and 60-strong choir at the Minnesota 9/11 Memorial Concert in the United States.

Tommy says he wrote Christmas Wishes ‘as a reminder of those who are less fortunate than us’.

“As per all my songs, I have never really done much with them,” he says, “but I decided this one could raise awareness and much needed funds for those Manchester organisations dealing hands on with the homeless and less fortunate.

“I am proud to have a song in the charts but I am more proud of the unselfish volunteers who give so much of their time to help our homeless, and who need the donations of food, clothing, tents and so on to keep coming in.”

The song features Alyce Hamilton on lead vocals with harmonies by Manchester’s Sapphire Blue Choir, whose members also make up the Sandwich Angels, a group of volunteers who deliver food to rough sleepers.

Christmas Wishes is released today and can be downloaded from iTunes, Amazon and other online music stores for just 79p. All proceeds from sales will go to organisations helping the homeless across Greater Manchester.

“If anyone wants to donate a little extra, please do!” says Tommy.