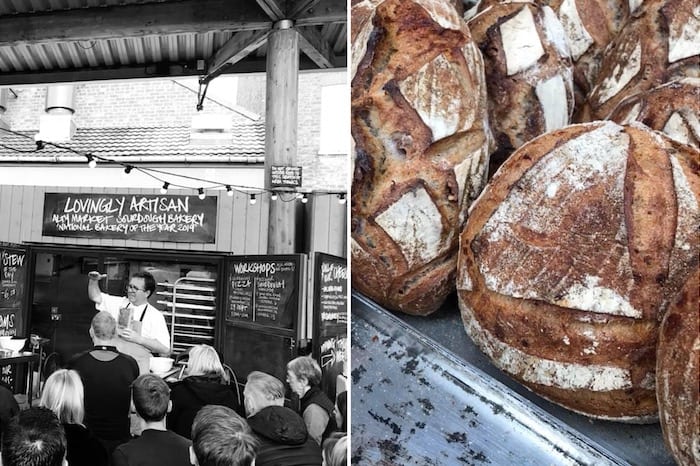 Yes, we know. Manchester might boast the likes of Pollen, Trove and Siop Shop, but according to the National Bakery awards, it’s Altrincham Market’s Lovingly Artisan that’s scooped the top gong this year.

Husband and wife team Aidan Monks and Catherine Connor accepted the award at a ceremony in London on Wednesday 11th March at a glitzy awards evening hosted by TV presenter Mark Durden-Smith.

Baker Aiden studied at the College of Culinary Arts in Boston, Massachusetts before going on to be mentored by experts from Grand Moulin de Paris, today a major leader on the milling market.

Adopting old methods with a new way of thinking, he uses a mix of raw milks, ancient heritage grains like Einkorn, and double fermentation techniques when creating his bread.

He also uses his own homemade 30 year old leaven, created from a handful of organic raisins, to lighten and soften his dough.

Blending flours boldly for maximum flavour, each bread has its own unique characteristics. The amount of choice on offer is staggering.

Flavoured bread choices include cheese and marmite, sultana and rosemary, mature cheddar and chilli, and a spiced rum and apple loaf.

Aidan and his team, based at both Altrincham Market and Plumgarth’s, Kendal, were crowned The Northwest’s Best Bakery, having previously been named as Cumbria’s Best Bakery.

Thirteen other regional finalists were announced on the night, alongside 67 other county champions from across the UK.

The annual awards are hosted by Bakery Business Magazine and look to celebrate “the highest levels of service, product knowledge, initiative, innovation, creativity and community involvement.”

Commenting on their win husband and wife Aidan Monks and Catherine Connor, owners and bakers at Lovingly Artisan, said: “It’s a real honour to be shortlisted alongside the other finalists in this year’s National Bakery awards, as both county and regional finalists and to win both is amazing.

“The annual awards provide a magnificent stage to recognise the skills and achievements of the whole industry. They are an opportunity to shout from the rooftops and celebrate those individuals and businesses at the forefront of the UK’s burgeoning artisan bakery scene.