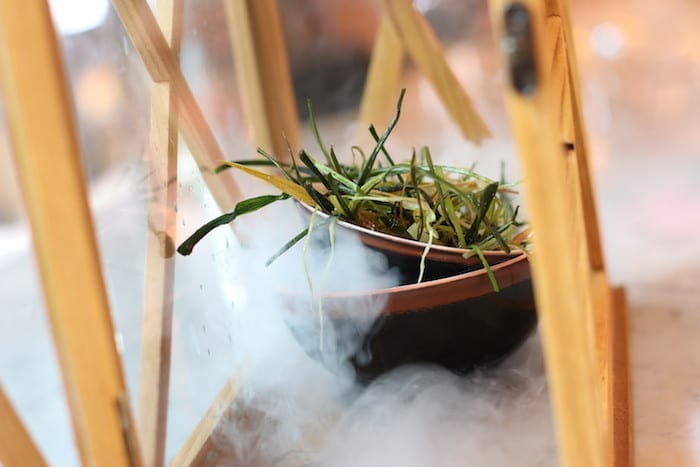 Be Impossible Manchester opened on Peter Street last month featuring a spectacular 280-cover bar and restaurant and a gin palace, with an immersive nightclub and express coffee bar still to come.

Set in the former Bar 38 building a stone’s throw from Great Northern Warehouse, the interior has been transformed from a bland space into an eclectic theatre of shapes and colours following a purported £3m renovation.

The menu is a triumph. As well as a range of well-known favourites, the kitchen serves unusual dishes such as Kangaroo Chilli Tacos (£4) and, the bit you’ve been waiting for,  Salt and Pepper Crickets (£6). They come in a steamed bowl of Thai-style dressing and taste just like cashew nuts. Honest.

A heap of devilled Curried Mussels (£8) served with toasted naan bread demand to be dunked into a creamy curry sauce.

Handmade Crispy Duck Spring Rolls (£7) with plum and schezwan sauce are as crispy as they are succulent.

Traditional Homemade Spanish Style Chorizo Croquettes (£7) with sun-dried tomatoes are full of the flavours of the Med.

Scallops and Bury Black Pudding (£9.50) on a minted pea puree is both delicate and comforting.

It’s open from 12pm to 9pm with a separate Impossible Taco kitchen serving guests through to the early hours – a rare find in our beloved city.

As well as the welcoming and wacky bar and restaurant, Be Impossible also houses an impressive gin bar AND, opening next month, an immersive nightclub.

The mezzanine level features a cosy but slick gin palace, with 63 gins from around the world, while a cryogenic freezer can freeze spirits to minus 74 degrees to form edible frozen cocktails.

Apparently, all bartenders receive regular training in botanicals and unusual facts about them to entertain customers whilst they’re shaking and stirring.

The molecular cocktail laboratory features an alcoholic mist condenser and the ‘Impossibubble’ – what they describe as ‘a lickable champagne bubble machine’.

The corner of the building (the bit that points to Deansgate) will eventually be transformed into an express coffee bar open from 7am.

You can’t be all things to all people, they said. Looks like they were wrong.