Be At One are the Barton Arcade’s newest tenants and it’s a welcome revamp of the old Circle Club site, says Mark Jorgensen 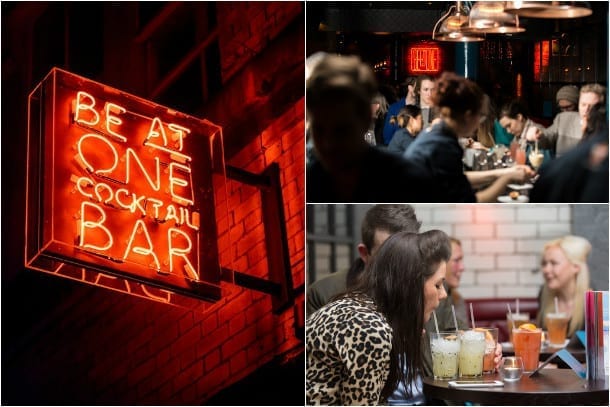 I was never much of a Circle Club fan, to be honest. It wasn’t really aimed at me, I know, but the arrival of swanky London cocktail chain Be At One  in the Barton Arcade is a welcome one.

The new swish Be At One Manchester is the 30th across the country and already has plans for expansion in what was the Inner Circle – the former Circle Club VIP area which was exclusively populated by guys who weren’t footballers telling girls looking for footballers that they were footballers.

In a foolish yet valiant attempt,  I went along to the launch with the express intent of trying as many of the 150 so that we would be able to give a comprehensive lowdown on my thoughts and favourites.

Unfortunately, I Love MCR publisher Chris and I tried about 15 or so of them between us before realising we were already way too drunk for this to be a viable idea. Which is a considerable victory for any new cocktail bar in my eyes.

With such as huge range of drinks to try, we have cobbled together some of our memories of the evening and singled out some of our favourites for you to try out.

I arrived on the night to find an already tipsy Chris shouting these two words repeatedly at the bar, changing the name slightly each time – including undoubtedly superior moniker Cheeky Gary Sensei. It has tequila, lime and tabasco in it. Tingly to the tongue and the brain. Really good.

For the more discerning, health-conscious drinker.  It’s mainly fruit and beetroot juices but with added Kamm & Sons just to balance out the health stuff with some fun. It’s like you’re tackling your hangover in advance.

I’m not ashamed to admit I childishly selected this off the name alone. It’s essentially an Old Fashioned using vodka instead of whiskey. I love an Old Fashioned so technically, I shouldn’t like this.

See above regarding childish name selection. This is a Be At One special of adding cranberry and lime to Vodka Red Bull – rendering that concoction significantly more palatable than the student night staple. Not sure where the poo aspect of this comes from but my money is on the Red Bull.

They had me at breakfast. I like to consider myself a sophisticated sort of chap and I think we can all agree, nothing says class quite like gin at breakfast. It also has marmalade and lemon in it, so that’s probably two of your five a day sorted as well.

All the woozy, boozy joys of your standard Zombie with added communism. A zombie is often the definitive full stop to most nights, so I think this was perhaps the tipping point which ended any hopes of getting further along our challenge. It was bloody great though.

Unfortunately, the Zombies were the final straw for all sobriety and that pretty much ended any attempt of trying any more out.

If you want to pre-check any more of their extensive range prior to your trip, Be At One have a handy guide to all of their available cocktails on their site to help you pre-plan your poison here.