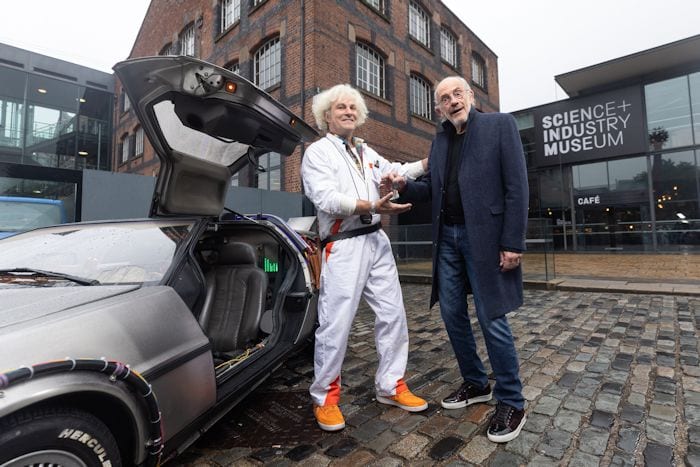 Christopher Lloyd, the actor who played the original Dr Emmett Brown in the Back to the Future film trilogy, narrowly avoided getting a parking ticket outside the Science and Industry Museum this morning.

He was in Manchester to hand over the keys to the iconic DeLorean time machine to award-winning actor Roger Bart, who plays the role of Doc in the world premiere of Back to the Future The Musical, which opens at the Manchester Opera House next year.

Roger has had a prolific career on stage and screen. His most notable TV and film credits include The Stepford Wives, The Producers, George Williams in Desperate Housewives (ABC), Roger Riskin in Episodes (BBC 2), Vice Principal Nero in A Series of Unfortunate Events (Netflix) and currently Judge Curtis Wilson in Good Trouble (Freeform).

His Broadway credits include Carmen Ghia (Tony nomination), Leo Bloom in The Producers, Xanthias in The Frogs, Dr Frederick Frankenstein in Young Frankenstein, Tony Delvecchio in Disaster The Musical (all original Broadway productions).

Back to the Future The Musical will be his British stage debut.

“I am thrilled to be here in the great city of Manchester, England to introduce to the world this extraordinary incarnation of this hilarious and heart-warming story,” said Roger.

“Playing the role of Doc Brown, made iconic on film by the brilliant Christopher Lloyd, is going to be the adventure of a lifetime. After all, at this stage of my life, who doesn’t want to go back in time?”

Back to the Future is the story of Marty McFly, a rock ‘n’ roll teenager who is accidentally transported back to 1955 in a time-travelling DeLorean invented by his friend, Dr Emmett Brown. But before he can return to 1985, Marty must make sure his high school-aged parents fall in love in order to save his own existence.

The movie was released in 1985, starring Michael J. Fox as Marty McFly and Christopher Lloyd as Dr Emmett Brown. The film grossed $360.6 million (£279 million) at the box office worldwide and the total box office for all three films in the Back to the Future trilogy was $936.6 million (over $1.8 billion in today’s money).

Back to the Future The Musical is at the Manchester Opera House 20th February 2020 for a strictly limited 12-week season, finishing on 17th May, prior to transferring to the West End.