“I couldn’t put a measurement on how much Manchester has influenced my work. I can’t separate the two,” says local poet Argh Kid – or ARGH KiD as he prefers it to be written.

ARGH KiD grew up in Longsight and went on to experience the difficulties of urban life, trying his hand at lots of different jobs, working as a broadcast journalist and starting a family, before finally making a name for himself as a poet in the last 12 months.

Now audiences across the country are hooked on the punchy, powerful poetry he calls ‘pub toilet sink realism’.

His poetry covers a huge range of themes, from the toughness of city life and seeing friends put in prison, to questions of identity and the importance of family.

But it was Manchester and his experiences here which provided the fuel for his writing.

“During my schooldays, poetry still felt elitist and inaccessible – still stuck on form rather than content. I can’t remember picking a poetry book up in school. That’s not where my influences come from.

“I can only write about what I know. The moment I start trying to write other stuff it would be false. This is after all a city with so many different stories to tell.

“We’ve always been a city of storytellers. I have an Irish background and the Irish storytellers were a big influence travelling through the area. We love telling stories and we love hearing them, whether that’s through music or at the bar.

“Manchester is like a fish bowl. You don’t realise its influence until you move away. I ‘emigrated’ to Nottingham and, though it does sound cliché, it really was a case of absence makes the heart grow fonder. In Nottingham I didn’t wear a coat for three years, for starters – I always have one now!”

Little did he realise on a night out with his mates, when he was making notes on his phone in the corner whilst they took to the dance floor, that one day his words would be broadcast to audiences of millions.

“I can’t play guitar and I can’t sing but I always knew I needed an output. I’ve always written but it was when I got up at open mics, amongst quite a lot of poetry which seemed more flowery, and started talking about growing up in Longsight, my life experience and observations, that people started to notice.

“Things started when our second daughter was born in 2016. I turned to my wife and I said, in terms of writing, ‘I gotta do something with this.’

“Then I went and booked a Greater Manchester Fringe slot at Joshua Brooks. Actually, the day Kendal Calling is this year – where I’m now poet laureate – is when my fringe gig was last year!

“I had some material but no experience of being on a stage. After booking it then I went home to my wife and said ‘I’ve done it’ – and I thought – I’ll invite every single person I know that would be brutally honest. My family, my mates. Then the gloves just came off.

“Coming out is a struggle in itself – saying you’re a poet. The shock was there as my friends and family just presumed that poetry was just about running in fields. I was nervous about it at first but learned just not to care about what other people thought. The fear is in your mind. If people don’t like it, they tend to forget it. So what is there to lose? Just go for it!”

Now he’s written words for BT Sport and ITV, and has big gigs lined up as the official laureate for this year’s Kendal Calling festival. He was invited by Manchester Metropolitan University to read some poems at the launch of the Manchester Voices accent and dialect project at Central Library earlier last month.

He wrote a poem about Mayfield through which he met Christopher Eccleston and She Gives You Just Enough, which was featured on the BBC following the Manchester Arena attack.  He was also this year’s UEFA Europa League Cup Final poet and has even signed a deal with United.

“I’m a big United fan,” he says “And now I’ve worked on an advert for the new clothes line, and the Manchester United Foundation. It’s brilliant.”

But he doesn’t like calling himself a poet – or a spoken word artist or performer for that matter.

“It all seems too limiting,” he says. “Other people call me a poet but I’d perhaps call myself a lyricist – or a failed musician!”

He works in schools too talking to children about poetry and building confidence, and has even bagged a record deal which he is hoping will result in the release of a single Young Lust in August and a concept album, Haven For Heathens, just before Christmas on Strawberry Moon Records. He’s even climbing a Patagonian glacier for the NSPCC charity next year.

“I never would have predicted that taking a chance and booking my first gig as part of last year’s Greater Manchester Fringe would turn into this.

“I’ve met some brilliant people here from all sorts of backgrounds. I’m not in it for the money. Meeting people is a currency in itself. From photographers like Paul Husband to creatives like Wendy Smithy,  DJs like Clint Boon and many more. This city is full of potential.”

So where did the name ARGH KiD come from?

“Most people just assume the name is based on dialect but it’s actually a thought-out process. Like a musician has a stage name, I guess.

“There was a hip-hop band called Little Brother who saw themselves as part of the line of greater artists before them, so the name was kind of homage to the greats. They were a ‘Little Brother’. I thought it was fantastic and remember talking to my Uncle Troy about it – and that integral to Manchester is its huge history of great lyricists and artists. I was following on from that and ARGH KiD stuck.”

You can catch ARGH KiD at Kendal Calling on the last weekend of July. He’s also doing his bit for Manchester Tourist Board, plus TV and radio slots. And he loves it.

“Reading my words to an audience is addictive. Watching people’s faces change as they start listening to the words. When you see your friends and family connected over something you’ve written it’s incredible. I’m proactive, I’m ridiculously driven, driven just to enjoy stuff. I can’t stop. It’s like that great Dylan quote coming to life. ‘He who is not busy being born is busy dying.’” 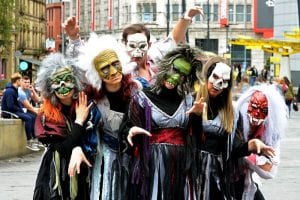 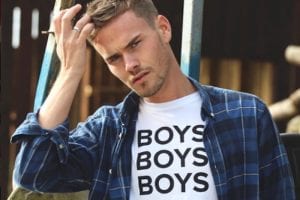 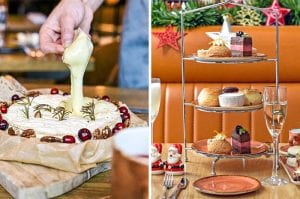