An Elusive Evening at Matt and Phred’s Jazz Bar 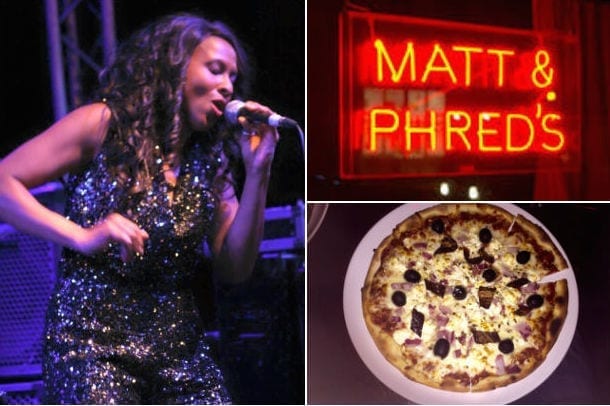 Another Saturday night in Manchester. It’s throwing it down. No change there then. Where should we spend our hard earned pennies? A movie, a bar, or a restaurant? Then a light bulb went on over our heads.

We had enjoyed the highly acclaimed Manchester Jazz Festival so we headed down to Tib Street to our favourite live music venue – Matt & Phreds.

This long established live music venue is one of the best, if not the best, authentic jazz clubs I have been to and worlds apart from any of the bars found in the Northern Quarter.

It’s been around for over 20 years and offers live music gigs six nights a week. It’s best known for showcasing the best in local and international jazz. Jazz greats such as Kit Downes, Marius Neset, Manu Delago, Jamie Cullum and Adele have all graced the small stage there. It’s friendly and about as cool as it gets without being pretentious.

After being greeted warmly and shown to our table near the stage by George our waiter-cum barman, the band trooped on to set up their equipment and the piped background music played a mixture or soul, jazz, funk and reggae

To eat we chose the chorizo in a tempranillo wine and tomato sauce which was a snip at £4.50 and couldn’t have been bettered at any tapas bar in the city.

Having been told that pizzas are the speciality of the house, I ordered a Greek pizza whilst my companion had one of the house specials–pulled pork and pineapple. Manchester has many fine Italian pizza eateries but at a price of £7.50 and £9.50 respectively, the pizzas couldn’t be faulted for taste and value for money. Not gourmet but the place is a jazz bar that happens to serve food, not a restaurant with a side of jazz.

The headline act, The Dana Ali Band, is a neo-soul band who cite as their influences India Arie, Lauren Hill, Aretha Franklin and Stevie Wonder.

Suffice to say that by the end of the second set the place was rocking with 200 late night revellers soaking up the atmosphere with Dana Ali effortlessly banging out classics such as I Can’t Stand The Rain and Superstition with her sweet soulful voice. In a superb rendition of the Al Green classic Let’s Stay Together, she stretched every velvet vocal cord she could muster to maximum effect.

As Louis Armstrong once said, “If you gotta ask, you’ll never know”. Well, everyone in the club tonight knew. Looking around as the clock struck midnight and the band played on, you could tell everyone had that same feeling. They didn’t want the evening to end.

It was a fantastic night. If you haven’t been there to sample the atmosphere, music and food, you should. You won’t be disappointed