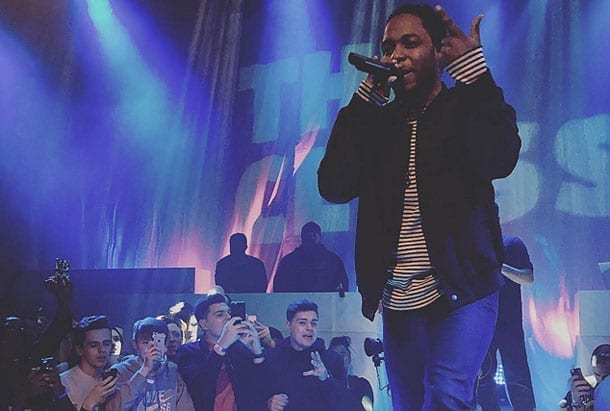 A group of young Manchester artists received a shock on Friday afternoon when the biggest hip hop artist in the world showed up at their music workshop.

Over 60 young people had registered for the Reebok-sponsored event called I Live Hip Hop, which was put together by Manchester-based music hub Brighter Sound.

“When Kendrick Lamar entered the room the energy went through the roof. I can’t even begin to tell you what the attendance of an artist of this calibre has meant to the young people involved.

“He is the definition of a true artist and went back to back on the mic with anyone who wanted to rap with him. Finally it feels like modern hip hop has produced a role model worthy of our young people. Kendrick Lamar will no doubt replace Tupac Shakur as hip hop’s biggest icon.”

The full day of events included lunch, Reebok gifts for all involved, and music by Manchester’s 8 Gold Rings Band, before a full live show from Kendrick at Granada studios.

Today Thirty Pound Gentleman was due to host a Q&A with Kendrick Lamar for Brighter Sound and Reebok Classic. Instead of a Q&A Kendrick came in and joined in with the young artists that came to hear him speak, he listened to them spray all bars from Rap to Grime.

Thirty Pound Gentleman is a GQAL registered centre that uses the power of creativity to deliver employability skills and awards to adults and young people. Founded by rap artist Danny ‘Fallacy’ Fahey, the project seeks to empower and encourage young men and women to seize and re-connect with achievement.