Captured on film for the first time: the amazing real-life Spider-Man of Manchester

You’ve probably heard of Spider-Man, rated by many the world’s greatest superhero.

What you probably don’t know is that Manchester has its very own version. He’s called Spider-Manc.

Last week we asked him to come into the office to demonstrate his skills and went up to the roof to film him.

Now as far as we’re aware, the real Spider-Man has never been asked to get off the roof of a building for health and safety or security reasons.

But this isn’t New York, this is Manchester. And that’s exactly what happened. Eagle-eyed security staff spotted him on CCTV and told him to come down.

And being a very polite superhero, he did as he was told. 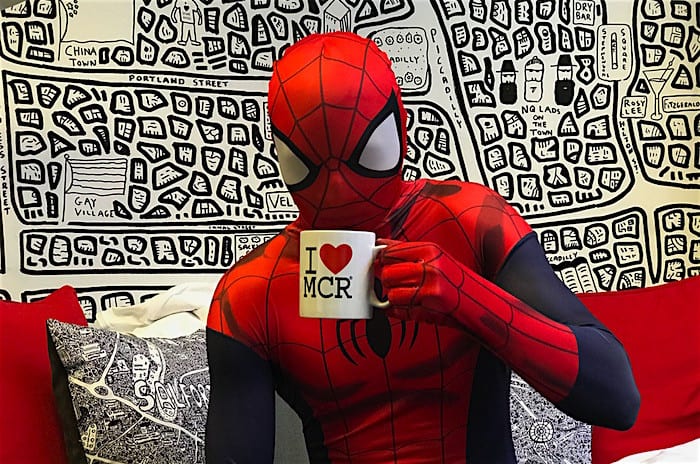 It’s not the first time this has happened. When people see him climbing buildings, they’ve been known to call the emergency services “because nobody knows what I’m going to do, being so high up”.

It was a bitterly cold day, so we went back to the office for a brew. As he struggled to drink his tea through his costume – it turns not even a superhero can do this – we took the opportunity to find out a bit about him.

Like most superheroes, Spider-Manc wants to keep his identity secret. But he did tell us  his name is Mark, he’s from Wythenshawe and he’s 23 years old.

Unlike the original Spider-Man, Mark hasn’t got any superpowers because he’s never been bitten by a radioactive spider.

He hasn’t got a web-shooter either. And he clearly isn’t capable of healing injuries faster than ordinary humans because he was nursing an arm he hurt when he was hit by a taxi a few days earlier.

But what he does have in common with Spider-Man is a passion for climbing buildings – which is what he likes to do in his spare time.

He describes himself as an urban explorer. He likes abandoned buildings and tall man-made structures.

And, like the real Spider-Man, Mark is a freelance photographer, so his climbing skills come in handy when he’s out and about looking for unusual shots.

He’s clearly pretty good at it.

Doesn’t he get scared? “No,” he told us. “I absolutely love the adrenaline that you get when you’re so high up.”

He’s been on the roof of the 351ft City Tower in Piccadilly Gardens. His ambition is to get to the top of the Beetham Tower.

Every new tower block and skyscraper is a challenge, so he’s clearly going to be kept busy for quite some time with all the construction work that’s going on in Manchester.

“I just love the cityscape, the way that everything’s transforming from what it used to be back in the day to what it is now,” he says.

Does he have any plans to fight crime like the real Spider-Man?