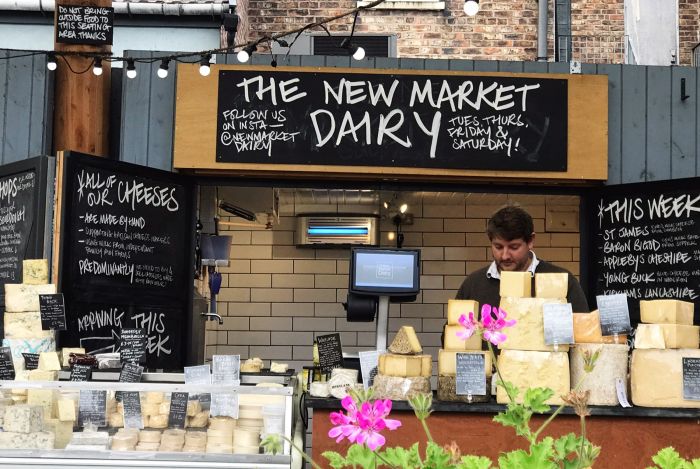 Altrincham based New Market Dairy, which is owned and run by Lake District-based cheesemaker Martin Gott, has been recognised as one of the top 20 specialist cheese shops in the British Isles.

Speciality Food Magazine this month launched a special issue focusing on cheesemongers who sell carefully selected artisan crafted farmhouse cheeses up and down the country, and who have played a significant role in helping the farmhouse cheese industry survive through the challenges posed to the sector by COVID.

Their efforts to support the industry saw members of the New Market Dairy team travel the length and breadth of the UK, to source from other cheesemakers, including Appleby’s Cheshire and Westcombe Dairy, in order to bring their goods back to their Manchester audience.

They aimed to bridge the gap between the producer and the consumer, and ensure their support for farming and the rural jobs and communities those jobs support.

“Being recognised as Grass Roots Champion alongside some of the UK’s top cheesemongers is a big pat on the back, especially at the moment with all that artisan cheese makers across the British Isles have been through and in some cases are still going through as they battle for their future,” said Martin, founder of New Market Dairy and producer of Lake District Cheese St James.

“Now more than ever we need people to support British artisan cheese makers and to buy farm made cheeses to help these passionate food producers survive and hopefully we are doing our bit to help in some small way.’’

With the help of a number of cheese professionals, the readers of Speciality Food Magazine and sister publication Great British Food Magazine drew together their final list of inspirational cheese retailers from across the UK, including Manchester, Yorkshire, Somerset, London, Wales, Scotland and Ireland.

‘’Britain’s artisan cheese industry experienced unprecedented challenges in 2020, and while shoppers rallied to support it – huge credit due to Jamie Oliver and his team – the journey is not over yet,” said Holly Shackleton, editor of Speciality Food Magazine.

“A number of British farmers and cheesemakers are still facing an uncertain future, which is why it’s imperative that retailers and consumers work to keep their excellent produce on our shelves and plates.

“Our artisan cheese sector boasts an enviable network of passionate advocates; now’s the time to collaborate to secure the future of one of Britain’s most valuable assets.’’