Calling all Lego fans. Do you miss the days of tipping your multi-coloured bricks all over the floor and building a make believe land for your little Lego men and women?

In case you didn’t know, Lego isn’t just for kids. Adult Lego is a thing. There are Lego sets geared for adults and there’s an Adult Lego community called Adult Fans of Lego – AFOL for short – who build with or collect Lego and go to regular meet-ups to build all kinds of weird and wonderful creations.

The Discovery Centre over at intu Trafford Centre hosts a popular Adults Only evening on the first Wednesday of every month which gives big kids over the age of 18 the chance to experience a night of Lego-fuelled fun and have the whole of the Discovery Centre to themselves. 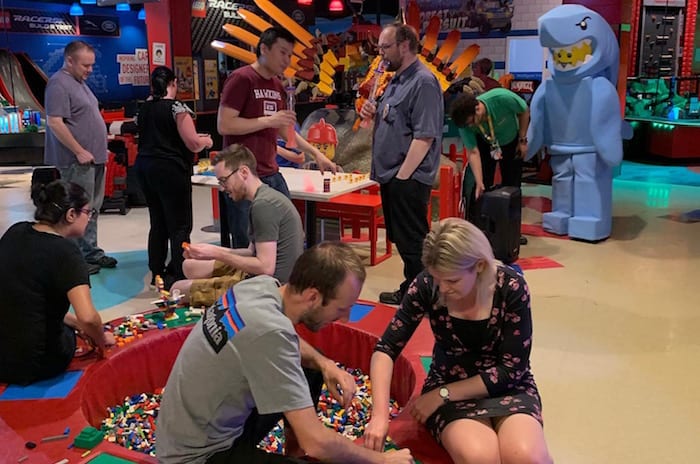 Being avid Lego fans we decided to go and check it out for ourselves.

We were greeted by a super happy Lego Master who had us all running on the spot and jumping around like lunatics to get the Lego-making machine up and running (basically making us all look silly as he secretly held the on button in his hand).

As we entered the magic land of Lego we hopped aboard Kingdom Quest, a mini-ride in a chariot which took us on a mission to save a princess from captivity. Think laser guns and a lot of zapping of beastly trolls. Fun. 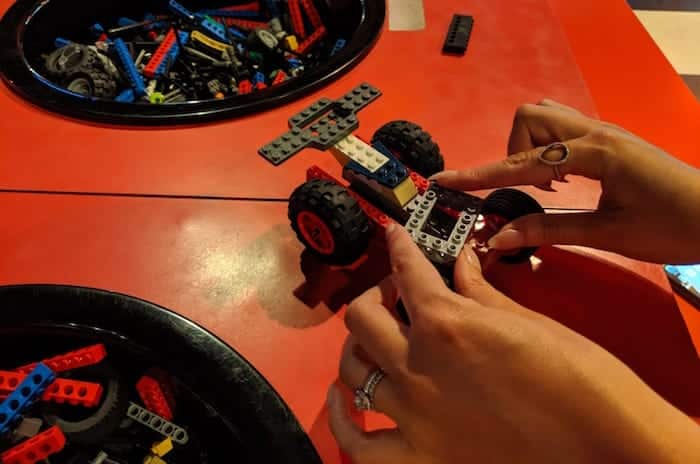 Next we headed to Miniland, a really impressive miniature world made from over 1.5 million bricks. This interactive city features Salford Quays, Media City, The Midland Hotel and a huge display of Blackpool promenade including the beach.

The intricate detail that has been put into these builds is something that everyone can appreciate, not just Lego lovers.

Then on to the main event.  Lots of tables are dotted about in the main hub with different activities on for you to get involved with, all of which can result in you winning some Lego to take home.

There’s a different theme each month. This month’s is The Summer Fayre.

There was a timed race to build a mini BBQ, an opportunity to hook a Lego duck, create the tastiest-looking Lego pizza and the one everyone was waiting for – the ‘Big Build’ where you must create your very own Summer Fayre using bricks from the brick pits. The are judged at the end with the winner taking home some sought after prizes.

All abilities are welcome and you can do as much or as little as you like. So if you want to relive a bit of childhood nostalgic, go Lego!