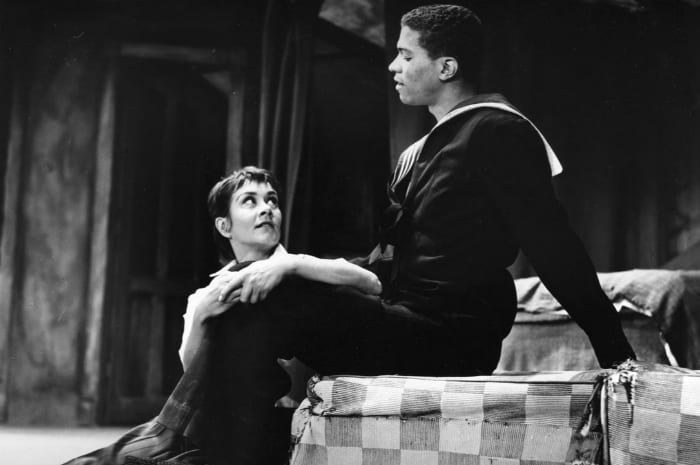 On 27 May 1958, Shelagh Delaney’s debut play A Taste of Honey premiered at Theatre Royal, Stratford East.

A down-to-earth and moving story of a teenage girl’s pregnancy following a one-night stand with a black sailor, and her bond with the gay art student who moves into her flat, it would become one of the defining feminist plays of the 1950s and pioneered the “kitchen sink” realism movement of the late 1950s and 1960s.

60 years later its legacy is still with us, its cultural impact apparent across the decades in everything from Coronation Street to The Smiths.

Born in Salford, Shelagh was just 19 years old when she wrote the play. Having been to Manchester’s Opera House to see Variations on a Theme by Terence Rattigan, she believed she could do better.

Her instincts paid off. From her terraced house on Ducy Row in Pendleton, Shelagh, the daughter of a bus conductor, wrote about the world she saw around her.

Drawing on the gritty reality of working class northern life, Shelagh completed the manuscript in under a fortnight while on leave from her job as a photographer’s assistant at Metropolitan-Vickers electrical engineering company.

She sent it off to Joan Littlewood, the avant garde director of Theatre Workshop, whom Shelagh described as “the most valuable person I’ve ever met.”

“A fortnight ago I didn’t know the theatre existed,” she wrote in her covering letter. But “a young man, anxious to improve my mind, took me to the Opera House in Manchester and I came away after the performance having suddenly realised that at last, after nineteen years of life, I had discovered something that meant more to me than myself.”

The play had, in fact, been longer in the making, Shelagh later revealed, having started life as a novel. Its premise was startlingly original in 1958, focusing on the lives of two working class women and addressing issues including sex and sexuality, motherhood and domestic struggles.

Caught between the ‘keep calm and carry on’ cheery stoicism of the 1940s and the sexual revolution of the 1960s, the central characters of teenager Jo and her single mother Helen openly resent the poverty of Salford’s slums but they are never martyrs. While men come and go, women remain the cornerstone.

The two women’s circumstances are not what they would have chosen. “It’s falling apart, it’s true, and we’ve no heating, but there’s a lovely view of the gasworks, we share a bathroom with the community and this wallpaper’s contemporary,” asks Helen, in a wry pastiche of all that was meant to matter to women in the 1950s. “What more do you want?”

Years before Coronation Street was broadcast on TV screens across the country, the play turned domesticity into art. Corrie creator Tony Warren was in the audience at Stratford East, and it is easy to see the play’s influence on the soap. Would characters such as Elsie Tanner have been portrayed on television if Helen hadn’t already conquered the stage?

The play rocked the establishment in 1958. In the theatre programme, director Joan Littlewood described Shelagh as “the antithesis of London’s Angry Young Men. She knows what she is angry about.”

Some London critics were unsure of what to make of this gritty depiction of northern working-class life, portrayed without sentimentality or mawkishness.

The Daily Mail‘s critic thought that the play tasted not of honey but “of exercise books and marmalade” and that its “similarities to real drama are quite accidental”. He concluded: “If there is anything worse than an Angry Young Man it’s an Angry Young Woman.”

Others disagreed. The Times described A Taste of Honey as “tough,” “humorous” and “exhilarating,” while The Observer’s Kenneth Tynan was full of praise: “Miss Delaney brings real people on to her stage, joking and flaring and scuffling and eventually, out of the zest for life she gives them, surviving.

“Miss Delaney… is too busy recording the wonder of life as she lives it,” Tynan’s review continued, in a swipe at dismissive critics. “There is plenty of time for her to worry over words like ‘form’, which mean something, and concepts like ‘vulgarity’ which don’t… She is 19 years old and a portent.”

Shelagh herself said in an interview that the most rewarding feedback, in her opinion, came from “people off the street” rather than the critics.

People flocked to the theatre and the play was a success, transferring to the West End and then to Broadway, where it starred Joan Plowright and Angela Lansbury as Jo and Helen. In 1961, A Taste of Honey was made into a film starring Rita Tushingham and Dora Bryan, with Shelagh co-writing the screenplay.

The film “has an earthy gusto and sincerity that lift its somewhat downbeat theme and drab surroundings” wrote Variety, while The New York Times’ 1962 review claimed that the play, “which justifiably drew theatregoers like flies to London and Broadway, is more memorable on film.”

Whether on stage on screen, A Taste of Honey‘s impact has resonated through the subsequent decades and become a talisman for many northern artists.

Oranges Are Not The only Fruit author Jeanette Winterson has claimed kinship with Shelagh. “Delaney was born in Salford in 1939. I was born in Manchester in 1959. Same background, same early success,” she wrote in the Guardian.

“She was like a lighthouse – pointing the way and warning about the rocks underneath. She was the first working class woman playwright. She had all the talent and we let her go.”

Other fans include Morrissey, who used Delaney’s photo on The Smiths’ album cover artwork for Louder Than Bombs. A photograph of Shelagh appears on the cover for their single Girlfriend in a Coma, while This Night Has Opened My Eyes includes a paraphrase of Geoffrey’s line to Jo near the end: “The dream has gone but the baby is real.”

Other quotations and near-quotations appear in several other songs by The Smiths and Morrissey, including “I dreamt about you last night. Fell out of bed twice,” as well as “river the colour of lead” and “I’m not happy and I’m not sad”.

The play is still performed frequently. There were major revivals at Manchester Royal Exchange in 1989 with Graham Fellows and Caroline Milmoe, in 2008 with Adam Gillen and Jodie McNee, and in 2014 at the National Theatre with Lesley Sharp playing the role of Helen. There’s currently a production at Oldham Coliseum.

“A Taste of Honey was written 31 years ago but it could have been written yesterday,” wrote John Peter in The Sunday Times following The Royal Exchange’s 1989 production.