Review: A Taste of Honey at The Lowry 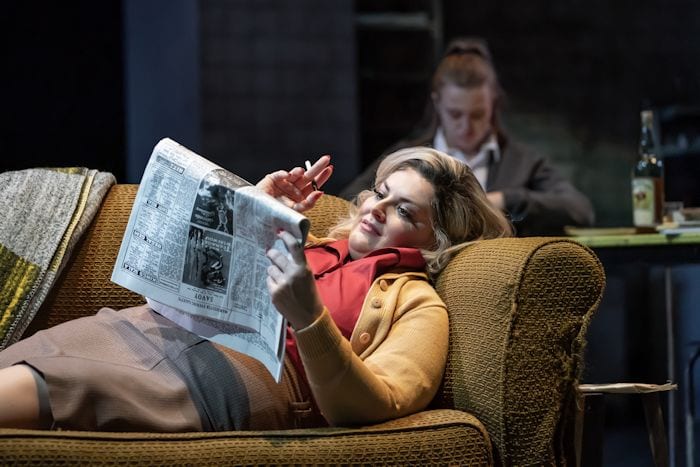 Shelagh Delaney’s A Taste of Honey is an intimate look at a mother/daughter relationship which is as destructive as can be.

As a precursor to Coronation Street, this kitchen sink drama remains popular because many of the themes are timeless and it features two strong, dominant women.

Gemma Dobson has played Jo at the Oldham Coliseum and still manages to convey the character’s genuine sense of longing in this bigger, bolder National Theatre production.

Her character comes across as cocky and Dobson is great at showing what lies beneath this. She just wants a mum, as opposed to a mother.

Her mother Helen is played by Jodie Prenger, who has always been great at comedy. It’s in her bones. So when her character is playing word tennis with her daughter, she excels.

But she sometimes veers into a Hilda Baker caricature so you never feel her character’s hidden pain. Helen is totally resigned to the fact that men leave her and that her life is a lonely one, even though she embraces the happy times.

But you don’t always feel that in Bijan Sheibani’s ambitious production.

A Taste of Honey works best when it highlights the claustrophobia of the dingy house where these two characters live because when the fireworks begin, the drama is intensified.

Part of the problem is that Hildegard Bechtler’s set design is overly stylised and vast. When the characters try to communicate in this huge space they sometimes become inaudible. You never really feel that they are living on top of each other.

This is supposed to be smog-filled Salford in the 1950s but at times it feels like a converted apartment in the Northern Quarter today.

There are other elements that work and bring something new to this frequently staged piece.

Benjamin Kwasi Burrell’s musical numbers feel awkward to begin with because it feels like a stunted musical and you are not sure where this is headed.

But then Stuart Thompson’s Geoffrey steps onto the stage. This brilliant actor is making his professional stage debut and his Geoffrey oozes confidence when singing Noel Coward’s Mad About The Boy.

When he snaps out of this fantasy sequence, he is Jo’s best friend – a young man so keen to fit into society that he is willing to help her bring up her baby and watch his dreams disappear.

This is where Delaney’s writing is way ahead of its time. Jo surrounds herself with outcasts. Geoffrey is gay and her boyfriend Jimmie is black but instead of stereotypes, Delaney sees these characters as glimmers of hope for Jo to cling on to.

But, like a Tennessee Williams play, we are reminded that to escape is never as easy as it looks.

During the first half, this production does not seem to know what it is. Yhe stage is constantly busy but it needs some calm before the impending storm.

The second half has more heartache and less optimism and, thankfully, a sense of less is more returns.

I can see why the National Theatre has created such an innovative and contemporary looking production. If you just keep trotting out the same workmanlike productions of classic pieces like A Taste of Honey, your audience never gets younger.

But Chris Lawson’s recent production at the Oldham Coliseum, in which Jo and Helen  bickered as they dragged their suitcases through the stalls, captured the essence of the play perfectly.

Here, even though the music accentuates the drama and the set is grand, the dirt under the finger nails and the sense that society has rejected these two underdogs is absent. That makes this taste of a honey a bittersweet experience.

A Taste of Honey is at The Lowry until 21st September and tours the UK until November.