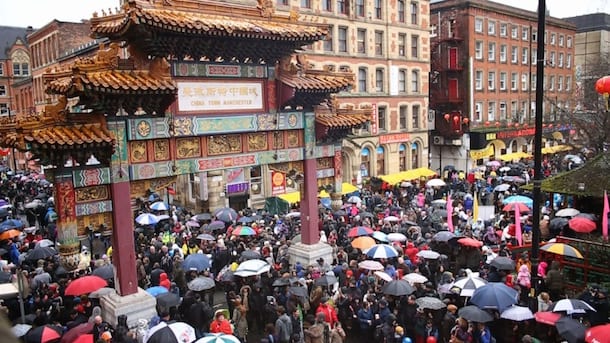 Visitors to Manchester’s Chinatown could be forgiven for thinking that the community, and the paifang (pictured above) at the Faulkner Street entrance, have been there since time immemorial. Locals, however – at least those over the age of about 35 – will be aware that, in fact, the impressive archway was constructed in 1987, having been shipped over from China in separate sections. The Chinese community itself, now the second largest in the UK, really took off after World War II, as labour shortages in Britain, and the flattening of many traditional farmers’ dwellings in the rapidly developing Hong Kong area began to take effect.

Today, a wander through the streets of Chinatown allows you to immerse yourself in Chinese culture – as far as it’s possible to do so in Manchester anyway! A proper introduction involves three elements; food, festivals and gambling. On their days off, people will gather in back rooms (as well as the local casinos) to play Mah-jong, poker and Pai Gow. Many of the games played all over the world today originated in China, and the Chinese love of gaming means that if you’re invited to play, you’ll need to have your skills honed. These days, sites like Ruby Fortune offer detailed tactics allowing you to practice in advance. Pai Gow is a complex domino-based game, but there’s also a Pai Gow variant of poker which is easier to pick up for beginners.

Manchester’s Chinatown is a meeting point for Chinese people from all over the north, especially on Sundays, a great day for people-watching. The aromas drifting from the kitchens of restaurants like Hunan and Ho’s Bakery will reignite your appetite, of course, but hang around long enough and you’ll forget you’re in the north-west of England. For those who want to try their hand at Chinese cookery, the food markets in the area are the place to start. George Street has a good selection of outlets including Woo Sang, with thousands of ingredients as well as a range of woks, knives, steamers and other useful items. 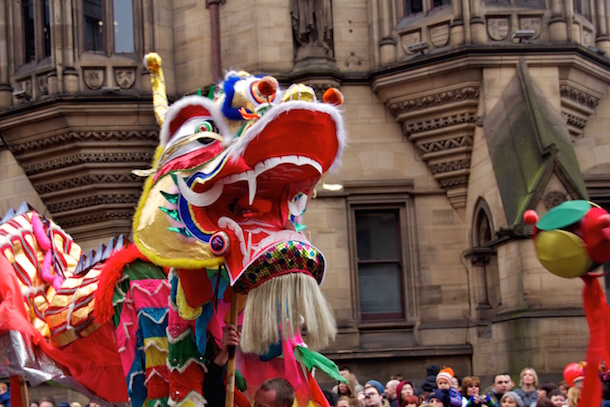 The perfect time to visit the area is of course Chinese New Year, and the 2015 festivities will kick off on Thursday 19th February, finishing on Sunday. Thousands of lanterns will be hung around the streets, there’ll be a market offering street food and traditional ingredients, but the highlight for most people will be the Dragon Parade. Musical and artistic events will also figure strongly. Nearly 100,000 people took part in the 2014 celebrations, a figure that was itself over 10% up on the previous year.

Manchester’s Chinatown is little more than half a mile in width, but the vibrant colours, fascinating characters, the mixture of ancient and modern culture and the irresistible food (including Vietnamese, Japanese, Thai and Nepali as well as Chinese) makes it an endlessly rewarding area to visit.