8 of the best comedy nights out in Manchester 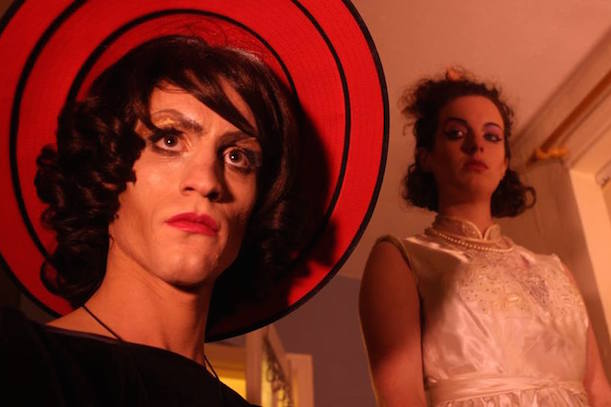 You may have seen Fi on the Manchester comedy circuit dressed like a drag queen as the title character of the new and darkly hilarious You Tube series, Phyllis.

She came to Manchester from Cumbria to study Drama at MMU but switched to Creative Writing and Literature, graduating in 2011. She went on to get an MA at the University of Manchester this year.

The thriving Manchester arts scene has enabled her to enrich her writing practice and continue to explore her love of performance through organisations such as Contact Theatre and Co Filmic.

Phyllis centres around one girl’s quest for love in what Fi describes as the ‘Katie Hopkins era’ of terrible opinions, bad magazine advice and the culture of ‘branding yourself’.

“My favourite kind of comedy is Julia Davis type stuff,” says Fi. “Stuff that also makes you want to cry a little bit, or people doing funny walks and falling over.”

If Fi’s early work is anything to go by, her funny walk belongs to the ministry. Her ability to create a comedy of bad manners for the twenty-first century was spotted at a stand-up gig by ex-BBC producer Micháel Jacob (My Family, Two Pints of Lager and a Packet of Crisps, The Smoking Room, Birds of a Feather).

The two worked together on developing the live character for the digital screen. Phyllis was originally an ‘elderly monster’. What you now see on You Tube is a guileless and grotesque young female hungry for love and acceptance.

Micháel says: “I’d always loved Fi’s Phyllis character so when she had the idea of exploring the young Phyllis in a web series, I was very pleased to be involved. We talked a great deal about the project through the development of different drafts…the scripts told a very satisfying story, and a very eccentric world came to life.”

As this leaves me laughing, something tells me she’s more qualified than she realises. Her advice to other aspirants in the North is to “go out and meet people that you can make work with. Improvisation is always a really useful tool for loosening you up and getting rid of your inner critic.”

So get your silly walk ready and follow Fi through her eight favourite comedy nights in Manchester.

Murder Inc. at the Ape and Apple

An improvised comedy ‘Who Dunnit’ show. Everyone involved with it’s fantastic and some of them (such as the brilliant Lukas Kirby) you may have seen performing stand-up around the city. It’s a great night and you get free pizza.

Sketch and the City at 3MT

This is a night organised by Cofilmic involving a mix of stand-up and sketch comedy. If you’re a writer, definitely submit a sketch as this is a great way to get your work performed by professional actors in front of a live audience.

Laughing Cows at the Frog and Bucket

I love this night and have been lucky enough to see people like Issy Suttie, Sarah Millican and Birthday Girls perform here. It’s a female only bill and a mere £7 for an advanced ticket.

This is a cabaret night. It feels like you’re at a party, not just a performance. They’ve had all sorts of brilliant acts on here including Bryony Kimmings and the amazing writer/stand-up Sophie Willan.

Comedy Balloon at the Ape and Apple

A fun and lively night usually made up of newbie stand-ups and more established acts testing their new material. It’s somewhere you can get 10 minutes of stage-time early on in your stand-up life without having to go through to ordeal of a gong show.

Speaking of gong shows! Beat the Frog is the Frog and Bucket’s weekly newcomer’s night. It’s on every Monday. Acts try to complete a five minute set without being voted off by the audience. I (well, Phyllis) won this night in Preston once, but it was by default as the far more popular act of the night had gone home by the time the final vote was cast. It was a really depressing victory.

Sidekick Comedy at Via

A monthly gig hosted by the fabulous Kate McCabe which usually has a stellar line up. I performed here when I was part of a sketch group called ‘The Rusty Sheriffs’. We had a lovely, gin soaked, night.

Watch Phyllis on You Tube