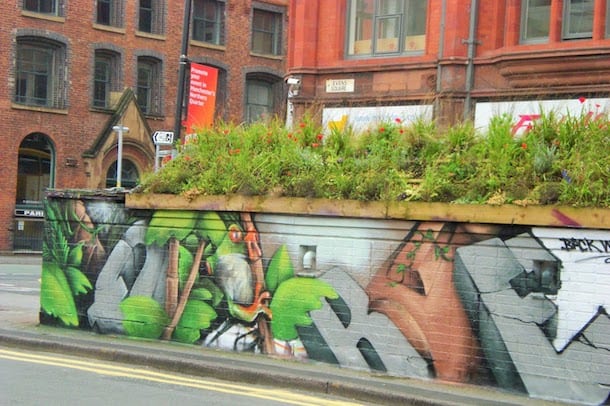 Green Space is typically associated with Victorian new town projects; as seen in cities like London, Edinburgh, and even Bath. Retrospectively, green space is one of the key characteristics of a Victorian urban development. Manicured lawns, sprawling parks, and pristine flower beds were a 19th century ideal; predominantly inspired by a desire to return to a vision of Britain that hadn’t been shaped and disfigured by the advent of industrialisation. Always the romantics, the Victorians had an deep- set ideology associated between public green space and proper city living.

“…can reinvent its industrial identity
by being more eco-friendly.”

Unfortunately for Victorian Mancunians, the city of Manchester was not planned and developed on this somewhat elitist premise. Manchester was a place for business; a city pragmatic to the point of bursting. The cotton and shipping industry created a region which simply didn’t prioritise green space. Instead, any additional room was utilised for creating accommodation and building factories.

Ever since, Hardman Square has been used as a place for people to meet, enjoy the sun, and watch outdoor movies in the summer.

As a result of this history, 21st century Manchester can often seem like its playing catch-up with the other great cities of Britain. However, following the events of 1996, the city has undergone a rampant rejuvenation programme. New infrastructure has been developed and a wave of building projects have helped to transform Manchester once again. However, one of the most interesting changes that Manchester has endured in recent years is the creation of additional green space. There is now a growing trend in the city to preserve undeveloped space for the sake of establishing secret gardens and public lawns.

Furthermore, there is also a growing awareness of how the North West can reinvent its industrial identity by being more eco-friendly. Over the past few years, there have been numerous architectural projects which have sought to reduce Manchester’s overall carbon footprint.

In this sense, Manchester is journeying through a period of tremendous change and transformation.

With that in mind, here is a small summary of the most significant green spaces of note within the city of Manchester. 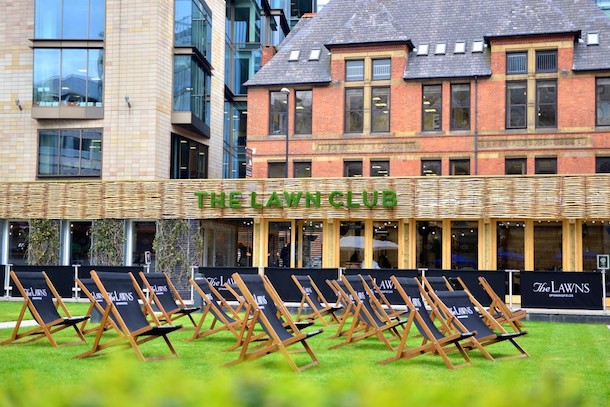 Hardman Square might not seem like the most obvious contender for important green space in Manchester, but the Spinningfields ‘Lawns’ represent something truly important for the city’s history.

The significance of Hardman Square arguably lies in the changing attitudes of Manchester citizens and their perception of green space. In the past, this would have been another area dedicated to re- development. However, following growing awareness about the importance of green space in cities, Manchester chose to keep Hardman Square a public park.

The area was initially intended as another building development within Manchester. However, following a period of time with no additional development, public consensus demanded that the area be maintained as as a small park.

Spend some time in The Lawn Club – seasonal cocktails, British inspired small plates and sharing platters and fun and games all day and night – a slice of the quintessentially British good life, this is a place to relax and grab a coffee, meet the girls for cocktails, enjoy a craft beer with your bessie or party till the wee small hours with the whole gang. Relax on a day bed, and when the sun’s out lounge under the retractable roof or in one of the outdoor pods. By night take in the Spinningfields vista by one of the roaring open fires… 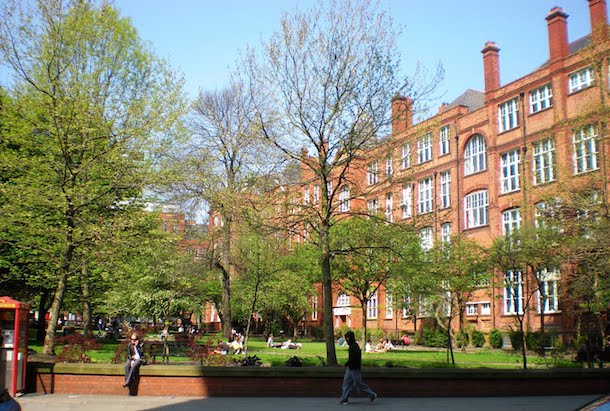 Another (not so) hidden gem in Manchester is Whitworth Gardens. This public garden features plenty of grass, trees, and flowers which help to give Manchester’s residents a peaceful escape from city living.

However, Whitworth Gardens is also noted for its statue commemorating the life and work of mathematician, Alan Turing. The statue depicts Turing holding an apple; the poisoned instrument he used to commit suicide. He is also facing towards Canal Street; one of the most famous streets in Manchester, typically associated with the city’s bustling gay scene.

In this sense, Whitworth Gardens represents something much more than Manchester’s desire for green space in the city. It also symbolises changing attitudes and how Britain can utilise public space to comment on the preconceptions which shaped our country in the past. 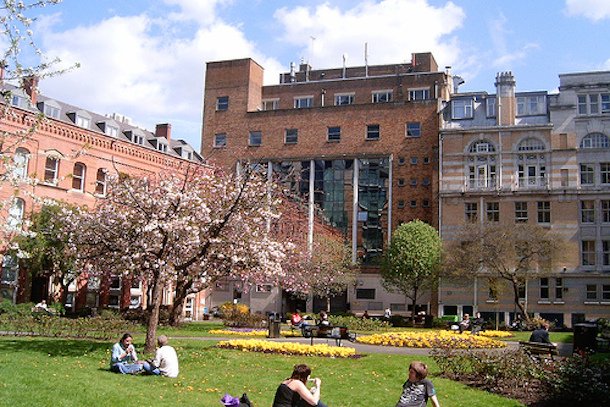 Finally, one of the most beautiful green spaces in Manchester is Parsonage Gardens. Located near Deansgate, this is a wonderfully tranquil area, once situated in the heart of the city’s industrial past.

Today, Parsonage Gardens feature a wealth of green space in which local residents can enjoy the fresh air and find peace and quiet in the midst of the city. There are a small number of fantastic green spaces in Manchester; however, the city still has a long way to go. That’s why there are a series of projects currently being put forward to rejuvenate different parts of the city.

Here are some of the most exciting plans which could potentially transform the way in which people live and enjoy Manchester. 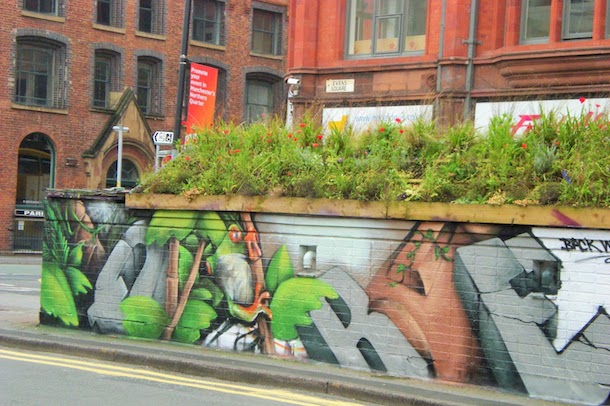 Situated in the midst of the vibrant Northern Quarter, Stevenson Square underwent a substantial crowd fundraising campaign to transform the square into an ‘urban oasis’. This was the first urban transformation where the funding was sourced in this manner.

One of the driving forces behind the re-imagination of Stevenson Square is a desire to make the area less industrial and more green. The intention behind this project is to make the Northern Quarter much more friendly and enjoyable during the daytime; giving people a place to relax and enjoy themselves. 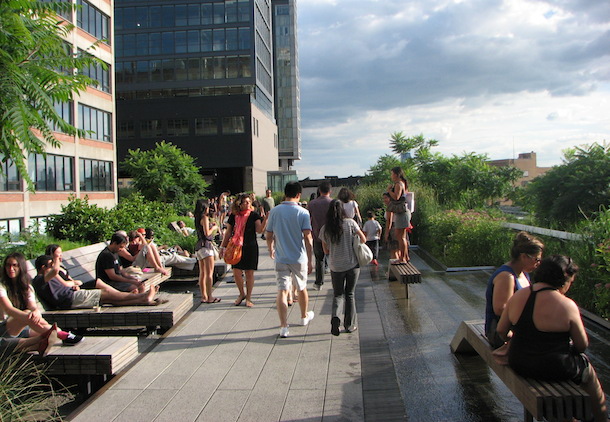 Another popular (but yet unrealised) project to create additional green space in Manchester involves the old Victoria Line. The proposal intends to create a Meat Packing District-style hanging garden using the abandoned railway bridge. In New York, a similar project was such a success that it generated nearly $1billion in visitor revenue.

While this is a fantastic way to potentially raise money for Manchester, it’s an even better opportunity to create more green space and reuse abandoned areas in the city. At this current moment in time, the railway is somewhat of an eye- sore. However, the intended project would make the Victoria Line beautiful and most importantly, useful once again.

In the future, it’s likely that more and more of Manchester will be transformed into a public park or garden for popular use. It’s not simply the case that developers want to create more green areas; instead, this is the product of public demand and helps to demonstrate that Manchester is changing its attitudes towards green space and how people want to live in the future.

It can’t be said for certain which project will materialise next, but the future is certainly optimistic for Manchester and its evolving cityscape.