18 years in the making: Salford Quays comes of age 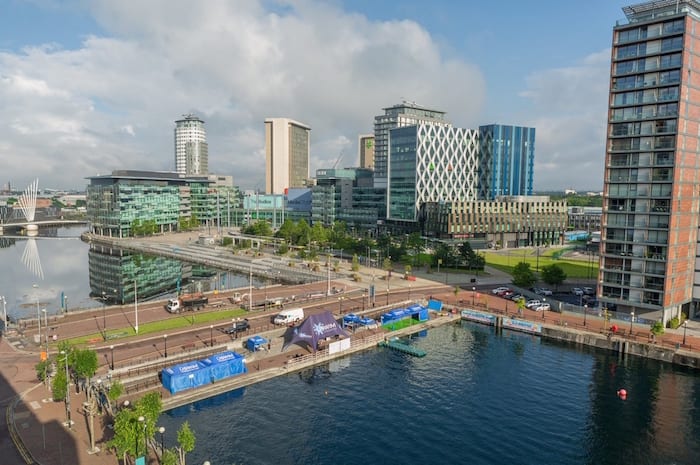 One of the biggest and most successful regeneration projects in the history of the north west has come of age.

This year marks 18 years since Salford Quays was launched with the opening of The Lowry arts complex.

The former docklands are now branded “The Quays” to incorporate attractions on the Trafford side of the Manchester Ship Canal including the war museum, Manchester United’s Old Trafford stadium and Lancashire Cricket ground. Ordsall Hall, the Tudor manor house dubbed “Salford’s hidden gem” has also been added to the area’s tourist trail. 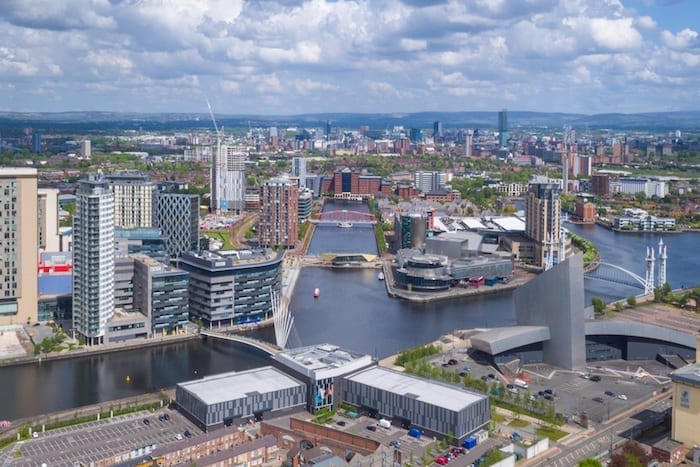 Today, following the development of MediaCityUK and the arrival of the BBC and ITV, the Quays boast a host of world class destinations, all within a square mile of each other. It attracts seven million visitors a year and generates £400 million annually for the local economy.

The area is also home to top businesses and highly desirable residential quarters soon to be joined by new waterside community at Clippers Quay.

The turnaround from the dereliction of the abandoned docks, which closed in 1982, has been astonishing. I well remember a thriving inland port – England’s third busiest for a time – and nursed the unfulfilled ambition to be on the first Manchester Liners’ vessel to break the ice on Canada’s St Lawrence river en route to the Great Lakes ports.

The decline came swiftly because of containerisation of cargo and the ever-increasing size of ships which were too big to navigate the 35-mile Victorian canal.

A year after the closure, the formidable Conservative politician Norman Tebbit was campaigning in the area. At the height of the North-South divide debate, I naively asked him to look at the wreckage of the docks and questioned why the government was prioritising the Channel Tunnel.

“Where do you want us to start digging it?” he retorted, “Here?” Touché.

But, quietly at first, things were already on the move. In 1983, Salford council acquired a substantial part of the former docks from the old Manchester Ship Canal Company (before the Peel takeover) with the help of a derelict land grant and began developing the quaysides, tackling pollution and introducing fish to the cleaned up water.

Development continued over time, mainly residential. It wasn’t until the opening of the area’s first true landmark, The Lowry, in 2000 that the Quays’ potential as a major visitor destination began to be realised.

If the funding campaign for The Lowry – spearheaded by the broadcaster Felicity Goodey – had been difficult enough, the story of the Imperial War Museum’s finances proved to be a helter-skelter.

With an original budget set at £40 million, architect Daniel Libeskind was appointed after winning the design competition with his concept of a world shattered by war into jagged shards. It was one the first major commissions for Libeskind, now famous for creating the One World Trade Center in New York – replacement for the twin towers destroyed in the airborne terror attacks of 9/11.

Failure of the Imperial War Museum North to be awarded Lottery funding threw the entire project into doubt, but Libeskind stuck with his task, modified his design and it was delivered for £28.5 million. Peel Holdings contributing an unprecedented £12.5 million. The building was topped out in late 2000 and opened to the public in 2002.

By the time the BBC decided to switch 1,800 jobs to Manchester in 2006, the chosen location on Pier 9 was the last undeveloped site in the former docklands, so successful had the transformation of the area been.

Lime is one of the players in the marketing partnership promoting The Quays as a major tourist destination, along with The Lowry, Quays Culture, the Copthorne Hotel, MediaCityUK, Ordsall Hall, the Helly Hanson Water Sport Centre, the Lowry Outlet, City Centre Cruises and spectacularly sited newcomer, the £1.2 million restaurant and bar The Alchemist.

Lime, the pioneering restaurant in the Lowry Outlet mall, celebrates its 18th birthday next month.

“We relocated our flagship to Salford Quays after we saw the huge potential for an independent food and drink establishment for residents, shoppers and theatre goers. The development and regeneration over the last 18 years has been incredibly impressive and exciting with the addition of MediaCity.

“Our location opposite The Lowry and Old Trafford has meant that we have welcomed some rather well known faces including Muse, Robbie Williams, and James Corden to name a few.”