17 current Manchester singers and bands well worth listening to 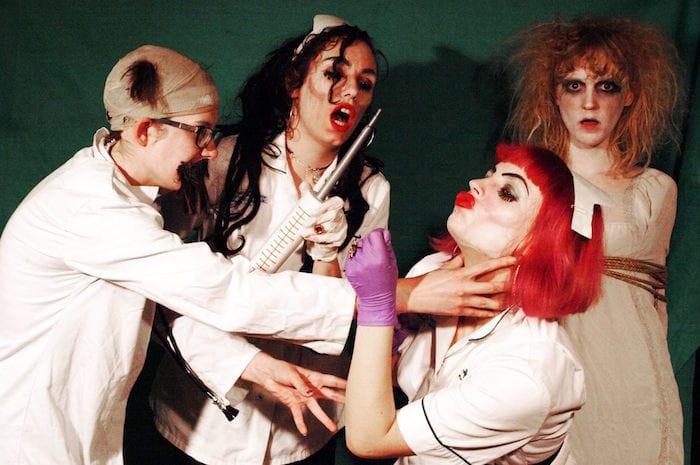 Manchester’s musical past gets plenty of attention but there’s lots going on right now to enjoy, too. So to get you in the mood for Record Store Day 2017, we’ve put together – in no particular order – a selection of 17 Manchester musicians definitely worth listening to.

An all-female genre-jumping 4 piece who believe in the power of disobedient noise and describe themselves as ‘a ferocious feminist disco punk art noise onslaught, with plenty of pith and and a side order of silliness’. Listed in The Guardian’s ’50 rising stars to look out for’, they specialise in provocative pop songs which explore the border between humour and horror, featured at Manchester’s Fat Out Fest and have a debut album We Are Ill due out in August.

A collective of artists and musicians from Manchester formed in 2012 and featuring co-founding member of The Fall, Una Baines. The wide range of instruments used – including multiple guitars and power flute – give gravity to their gothic-tinged, folky feel. They have an impressive back catalogue of tracks, including Honey Moon and Trinity, and have even gigged at Hulme Hippodrome, one of Manchester’s mysterious gems.

Some Kind of Illness 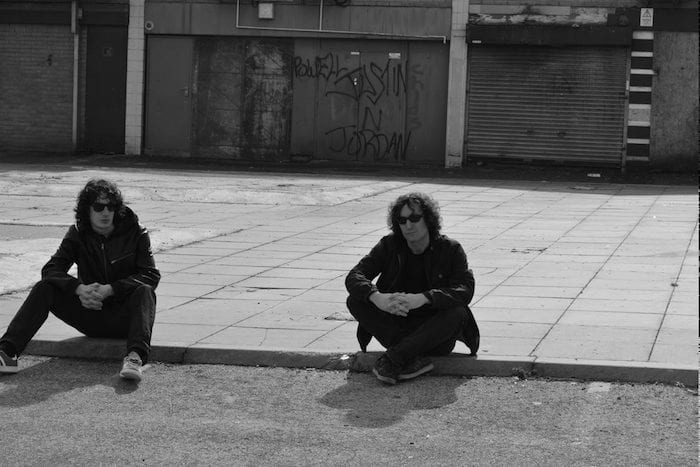 This alternative Indie guitar band formed in Farnworth by brothers Mark and Paul Hinks have two albums under their belt and have gigged at some of the most iconic venues in Manchester. Their music is part of the soundtrack for upcoming Indie film Northern Lights.  Influences of Richard Ashcroft and Moby can be heard amongst their ambient, emotional soundscapes. 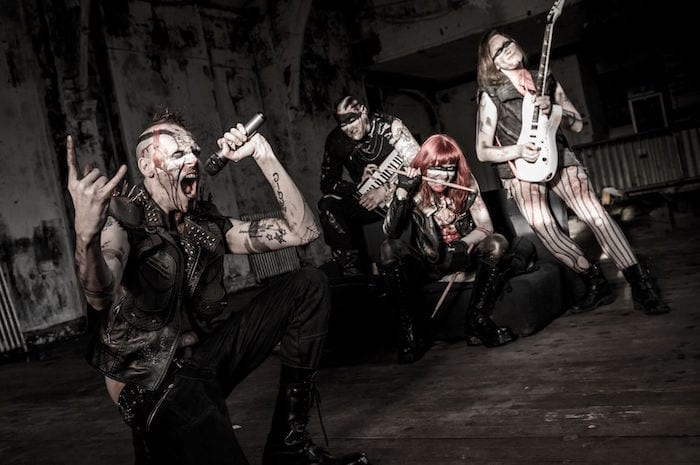 Ready for music you can scream along to in the shower? Syd.31 bring electro-punk power layered with industrial noise – with songs touching on everything from politics to personal experience. Their new album The Last Punks on Earth was released last month and uses a virtual version of the Joy Division studio where Unknown Pleasures was recorded, giving the music dark, mysterious dimensions.  Genre-mashing, gatecrashing music. 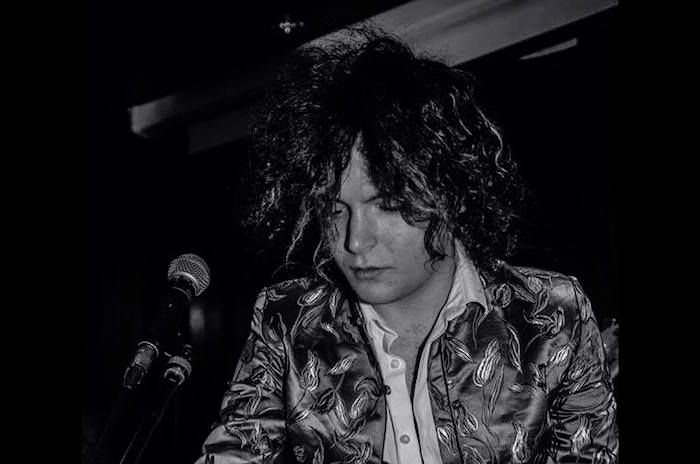 Sam Craighan provides an antidote to tired solo artists, with a combination of dark danceable guitar music mixed in with synthpop and topped with his signature, emotive vocals. Released his debut EP I Was Always Going to Give Her Up earlier this year, 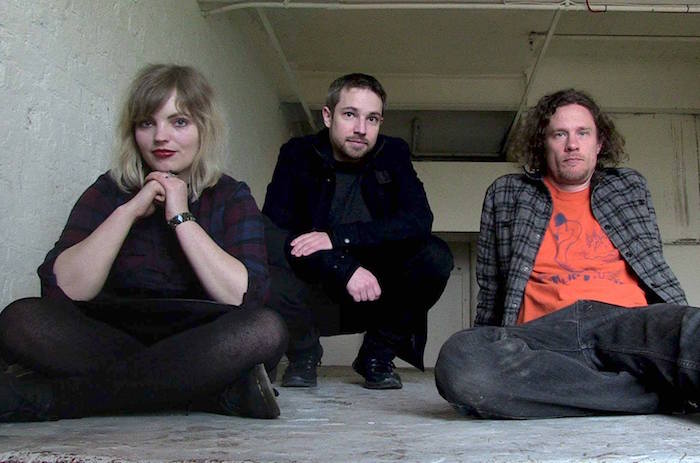 Jagged guitar noise and driving drums give Black Helicopters a post-punk edge – with some added experimentation. They take classical music samples and lines of lyrics before messing them up – and it’s a powerful experience. Their debut EP Broken Knowledge was released last year and challenges the statement heard so often these days that ‘all modern music sounds the same.’ 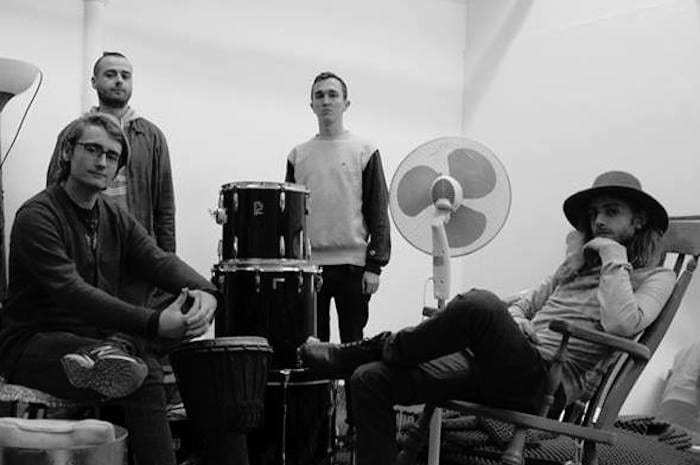 A four piece who describe themselves as a ‘sexually charged combination of guitar driven new wave ambience and psychedelic noise gaze melodies’ and they certainly are a treat.  Creating music with a powerful wall of sound and vicious energy, tracks such as Times of Conflict and Sertraline combine a punk ethos with plenty of reflection. If you’re a fan of shoegaze, you may well love these. 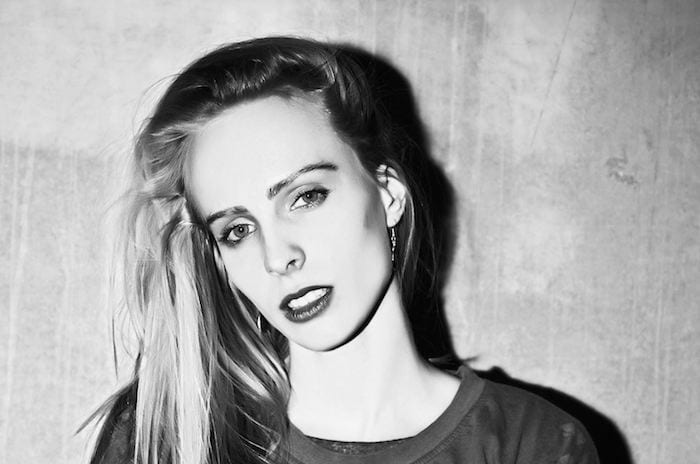 A solo artist with some of the most enchanting vocals around, over the top of large-ensemble soundscapes. With a new single Heavy released earlier this year, Marina makes music which tells of personal yet profound lived experience, with a maturity which makes it difficult to believe she is only 20 years old. 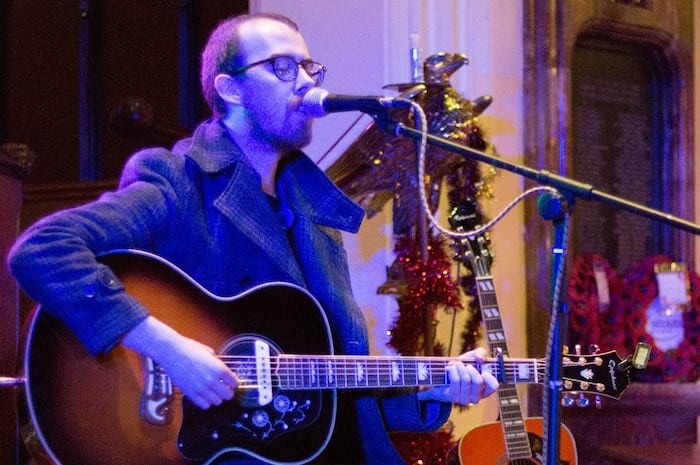 Tom Welsh brings the best of Indie together with the blues for moving acoustic music. Expect sensitive guitar rhythms together with creative vocals, a far cry for the tales of woe and heartache which typically dominate the blues genre. A regular at Northern Quarter’s open-mic hotspot, The Whiskey Jar. 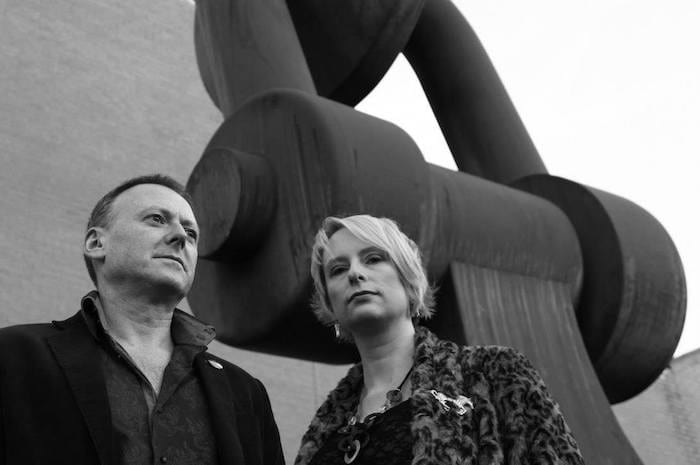 If you’re into dark, danceable electronica, you’ll love these. They are, in their own words,  ‘a Salford based dark-electro, alt-dance duo who exist at the edge of the analogue-digital divide, sometimes dreaming, always dancing. Cork at heart.’ With a name that shouts out Manchester’s history but music that is far from stuck in the past, you can expect an arsenal of synths, electro gadgets and bass. They even  formed at Salford Lads Club. Their new album Second Amendment is just out. 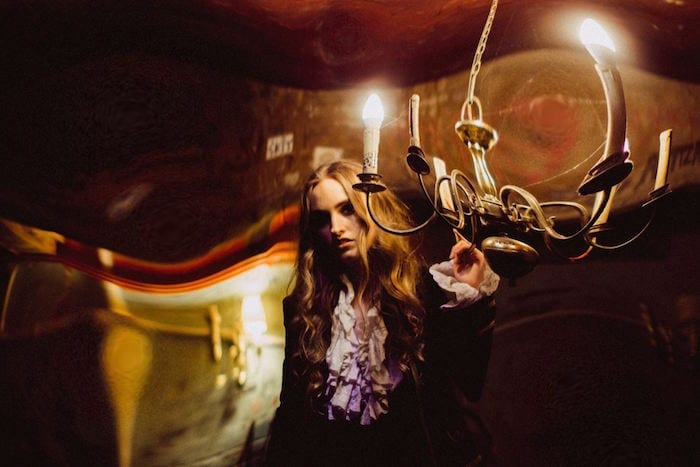 A songstress creating reverb-soaked songs full of emotion and topped with her strong acoustic guitar, Maddy Storm released her debut EP To The Sun in April this year. Mysterious, melodic vocals are sure to have you captivated. In her own words she’s ‘making music that sounds best in the dark.’ So why not turn off the lights and listen? 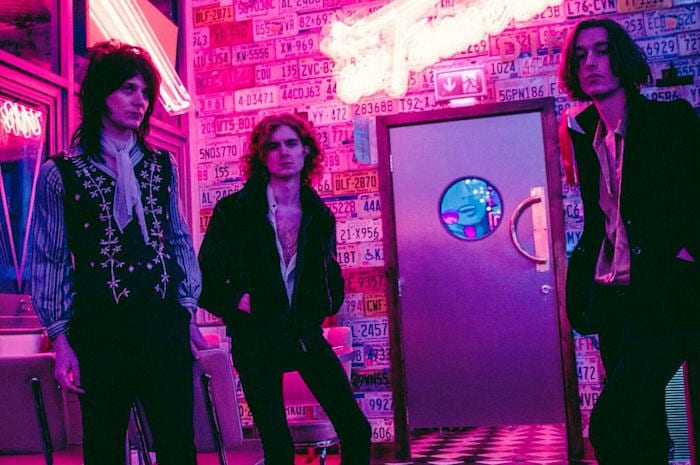 Psychedelia is far from dead. All you need to do for a flower-power pick-me-up is have a fix of Crimsons. This three-piece certainly is sweet, with Sam Cartwright’s almost feline vocals, Lucas Berry’s soulful basslines and Adam Kenny keeping it all together on drums. Seeing these guys live is certainly worth it and they also run a creative club night every month at one of Manchester’s newest venues, Jimmy’s NQ.  In their own words? ‘A pastiche of pounding ominous melodies and ambient gothic tones perfumed by psychedelia, wrapped in a red cloak.’ 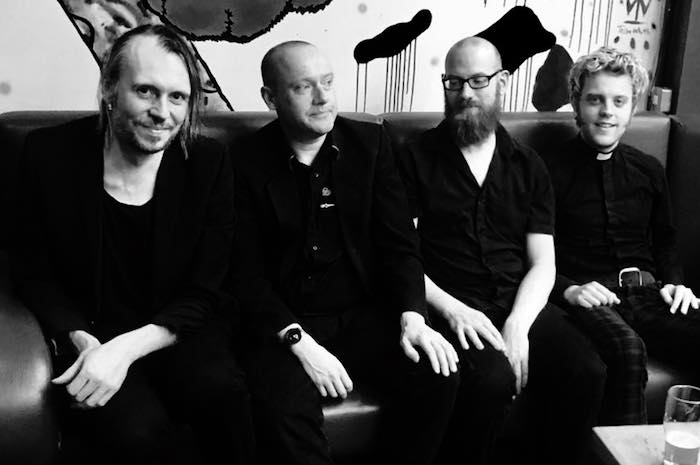 Formed in 2015, this a provocative post-pop four piece who played their first gig within a month, supported punk legends Subway Sect shortly after and sold-out a 7” single, all before Christmas.  Dark and danceable, combing intense electronics with glowering guitar and bass, these guys have been storming through the city, releasing their self-titled 12 track album last year and are going on tour later this year. 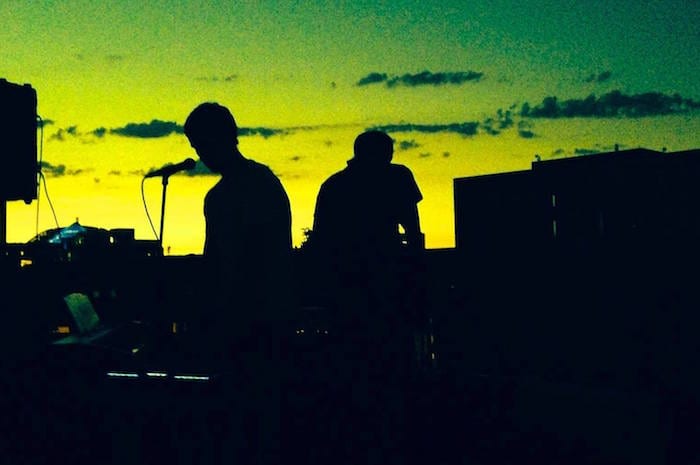 O>L>A (One Little Atlas) are an electronic-ambient two piece featuring some seriously otherworldly vocals. Their beautiful blend of harmonies, ambient soundscapes and treated guitars is stringed together with beats for an immersive experience. Currently working on a full-length EP, they gig regularly in Manchester so be sure to catch them. 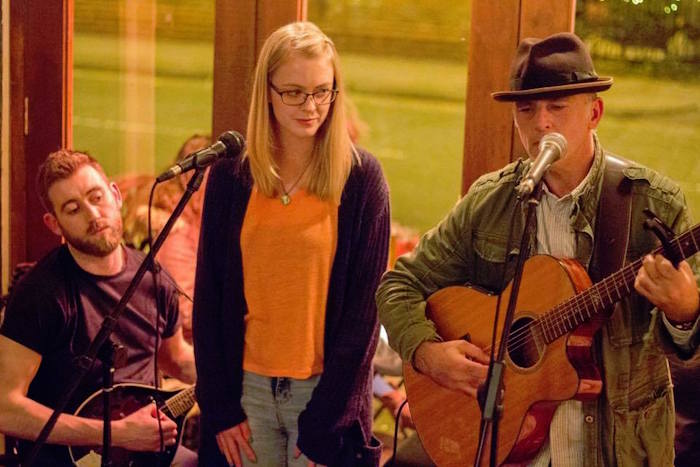 A folk band built around powerful acoustic music and a picking style inspired by Mississippi John Hurt and Leonard Cohen, this is a chilled-out listen fused with feeling. Fronted by Colin Cunningham, tender vocals combine with a substantial body of tracks. 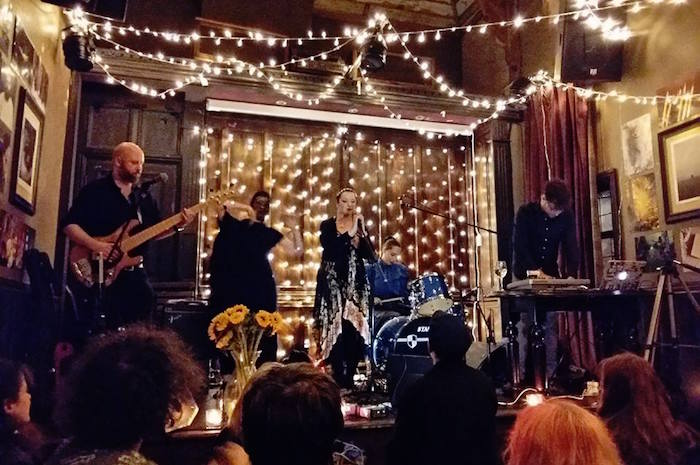 Creating downtempo songs driven by a gothic vibe and Mark Corrin’s powerful bass, Rose & The Diamond Hand have an experimental sound inspired by Siouxsie and the Banshees and Cocteau Twins. Featuring Rose Niland and Leonie Fox on vocals and guitar, plus Bob Clowrey (of the notable electronic duo Ten Mouth Electron), this is a group of talented musicians ready to captivate you. 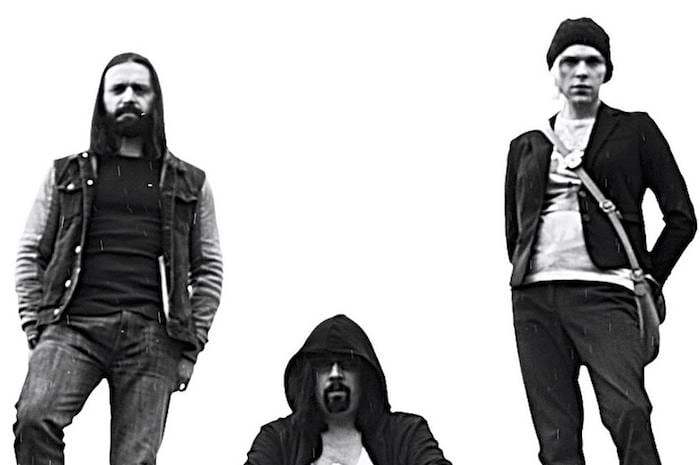 A trio from north Manchester who don’t just push barriers but break them with a blend of electro, post-rock and ambient sound synchronised into some truly stunning sets. They performed to a packed room at last year’s Foundations Festival and their music is ever-evolving, influenced by dystopian literature and driven by a barrage of melodies. Expect plenty from them this year.