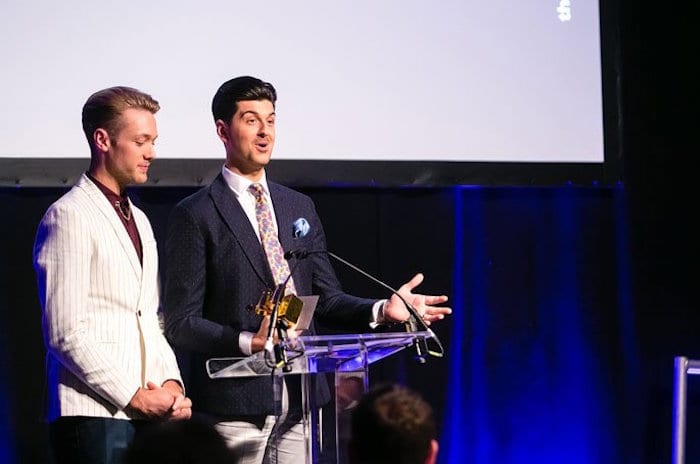 Will Whelton and Joe Houston gave up their careers on stage to become partners in crime. Well, life and work anyway. They are the people behind Hope Mill Theatre in Ancoats which comprises a theatre and events space, with The Engine Room Café & Bar at its heart. The five storey former cotton mill is also home to a number of creative studios for writers, artists and designers.

Last week the pair beat the likes of Kenneth Branagh and Rufus Norris to win the theatre and performance category at this year’s prestigious Hospital Club Awards in London’s Covent Garden.

They are currently busy producing, directing, and choreographing an adaptation of the classic sixties musical Hair, the story of a group of hippies who celebrate peace and love in the shadow of the Vietnam War. The ground breaking musical was the first in a new age of what we now know as ‘the rock musical.’ With its themes of war, prejudice, sexual freedom and self discovery, it is as relevant now as it was in the ‘60s.

Joe: We both trained as musical theatre performers and met touring in Australia over four years ago. We started working together in London and were really inspired by some of the smaller fringe venues there. Will is from Macclesfield and he was keen to move back closer to his mum but there wasn’t that scene is Manchester. We saw an opportunity to create a different platform for performers with our idea for Hope Mill Theatre.

Will: Sasha Regan. We actually met working for her. She is the owner/producer at The Union Theatre, a small fringe theatre in London with a reputation for staging musicals, including all-male Gilbert & Sullivan adaptations. She totally inspired what we try to do here, giving actors and creatives new opportunities and making it more affordable to reach a wider audience.

Joe: And our resident producer here, Katy Lipson. She is a successful producer in London but saw what we were doing here and fell in love with it. We owe a lot of our early success to her taking a chance on us.

Will: Winning the Hospital Award last week. We were amazed we were even nominated by the panel, and then it’s the public that vote for the winner. It was totally unexpected and, we thought, unachievable. The fact that someone else, our peers, recognise what we are doing makes all the hard work of running the business feel validated.

Joe: We aren’t naturally early risers but we set up the café most days for 10am. We have a few staff now, but didn’t originally. We prep all the food for the day, and then we sit down and try and get through all our emails as we do get lots of enquiries now from writers, performers, artists, and people interested in the space, the shows and what we are doing.

Will: We help with lunch service before our afternoon production meetings and rehearsals. When we have a show on we set up for the evening’s performance, run the bar, then clear down at the end of the night. Sometimes we are here until after 11pm, seven days a week.

Joe: We don’t get much time off but we enjoy going out for food in Vivid just up the road and breakfast at Home Sweet Home is one of our favourites. When we can, we go and see Will’s mum in Macclesfield and play with the dog!

Will: At the awards, Nica Burns said, “one thing we all have in common as creatives is we are risk takers” before announcing us as the winners. It’s a really hard industry. We never would have been there if we hadn’t taken that risk. There are problems with running your own business but you overcome them.

Joe: We were both professional performers before we launched Hope Mill so we are already on a different career path. Our passion lies in this industry,but now our skills have come together and we wouldn’t go back.

Joe: Nothing really, how boring is that! I have a lot of performers in my family and this industry is all I’ve ever known.

Will: I grew up on a farm in Macclesfield (my mum’s still there), I can drive a tractor and round up sheep. I think that surprises some people.

Will: We should say Blue as we are closer to the Etihad Stadium but I think you can tell from Joe’s response we aren’t really football fans.

Both: The Town Hall. We are getting married there next year.

Joe: I understand new developments are important to any city, but our history and heritage is what makes Manchester such a special place. So it’s not so much change, as retain, and continue to support our heritage through redevelopment and restoration, as it’s what our arts and culture are built on.

Joe: So many things. The people and their attitude, but mostly you feel like you are part of something here, and we could never have done this anywhere else. I’m from Glasgow but I’m in love with Manchester.

Will: Manchester has the best of all the cities in one. It’s not London, but better. It’s smaller but still diverse. Plus I’m a northerner and I miss northern people when I’m not here.