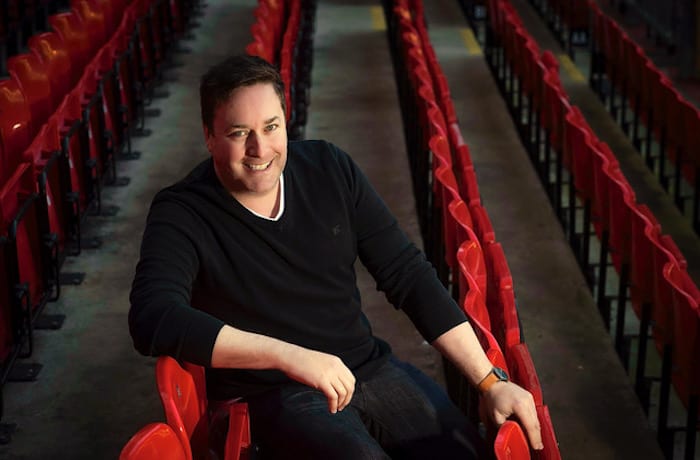 Birmingham-born Mark Collins moved to Manchester from London 11 years ago after a ‘bad day at the office’ when he was working as creative producer at Red Bee (formerly part of the BBC). Well, that and the fact he was offered a job in Manchester with an apartment.

He is now director of production at The Mob Film Company, better known as The Mob, who produce advertising content and TV commercials. Mark represents 20 directors who work there and oversees production whilst on location filming. He’s basically the go-to man. Whatever needs sorting, that’s his job.

The Mob is a multi-award winning company with a gold and two silver Cannes Lions in recognition of their work in the industry. Its head office is now here in Manchester, with  offices in London, Los Angeles, and Abu Dhabi. An impressive client list includes Manchester United, Manchester City, Audi VW, William Hill, Hays Recruitment and, most recently, a commercial for Britain’s Got Talent sponsors ao.com.

Mark is currently working on a huge block of filming with United, City, Tottenham and Chelsea, as the football season draws to a close and the players go away for summer.

I did a Film & Radio Degree in Canterbury and freelanced part-time with the BBC which led to a full-time job with them in London. I moved to a shitty bedsit in Wood Green and on my first day of work there was a tube strike. There were no mobiles then so I basically walked to work. I didn’t realise it was 12 miles away, and when I finally got there they told me I shouldn’t have bothered.

No one person in particular. More a type of person – directors. I’m always amazed by their ability to look at a script and come up with ideas on how to visualise it. It’s then my nightmare to make it happen. On Britain’s Got Talent we were already on set when the director came along and said ‘I’ll need a bigger rabbit’, which I had two hours to find before filming started.

Just before I moved to Manchester, I was invited to do a talk here at what was then The Circle Club, to discuss the future of the BBC and whether it should make the move north. I was the only one there that was in favour. Even now they might film here but they still bring up to eighty percent of their crew from London. I’m most proud that since meeting the owner of The Mob, John Brocklehurst, and setting up the Manchester office with him here, we actually hire and train the majority of our staff locally.

I could just as easily be jumping on a train to London as boarding a flight to anywhere in the world. My day is dictated by the scripts that land on my desk. Day to day I’m based at the Northern Quarter office with regular office hours, but on shooting days we might start anytime from 6am then work right through until very late, until the job’s in the can.

Frankly, unless I’m away, proper days off are difficult as inevitably I’m always in the beginning, the middle, or the end of a project. I’ve been doing this job for over twenty years and accept it for what it is. But if I’m in the UK I try and do as little as possible whenever I can, and if I’m abroad I try and pick places on a different time zone so I can hide from my phone and the office.

From the late Sir Terry Wogan – ‘if you want to do bigger and better things you have to take a risk.’ Which is basically what I did when I quit my job at the BBC and moved here.

Maybe a photographer. I used to have a darkroom when I was growing up, which I learnt later in life can have a very different meaning!

My cousin is Martin Duffy, the keyboard player with Primal Scream.

I work with both so couldn’t possibly answer.

John Rylands Library is like walking back in time, a medieval time capsule. Cottonopolis as it’s the epitome of the Northern Quarter at its best. And the outside terrace at Restaurant Bar & Grill is my secret destination for cocktails on a sunny day (or even if it’s raining as it’s heated and covered).

The buses. Don’t get me started. Sitting in box junctions, flying round corners, blocking pedestrian crossings. They should pedestrianise the entire city centre and be done with it.

Having lived in London for so long, I can honestly say Manchester is the most exciting city to be living in right now.