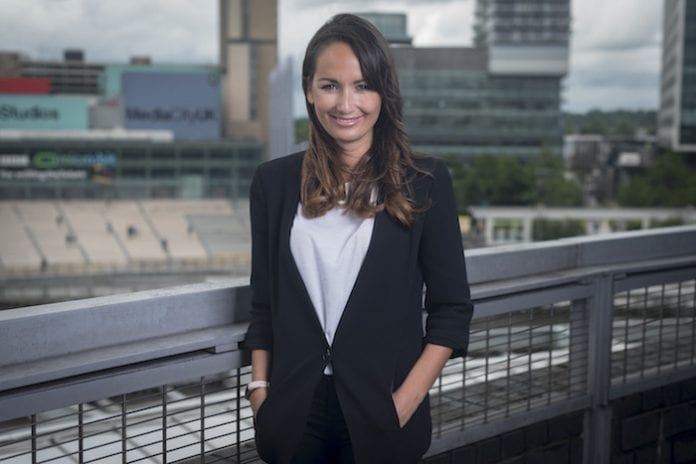 Rochdale-born Julia Mitchell set up her company, Toast PR, thirteen years ago in Nottingham’s Lace Market after studying a business degree at Warwick Business School and a stint working for Boots PR. She now has offices in Leeds and London with a head office in Manchester at Old Granada Studios, due to move to the XYZ building in Spinningfields in spring. Their clients are a mix of consumer and corporate companies across the UK including Gossard, Bravissimo, Allied London and Market Gravity.

Julia is currently campaigning for companies to get on board with #RightToDisconnect,  a scheme already introduced in France and Denmark whereby workers can switch off their laptops and smartphones out of office hours and at weekends and restore their work/life balance. With #RightToDisconnect, the idea is that everyone benefits – a happier and less stressed workforce resulting in more productivity during working hours.

As a kid I was always obsessed with the media and dissecting news articles. I wanted to be a journalist but also have an interest in business so I put the two together. I am a PR nerd and love what I do. I find it hard to switch off but I’m better now with #RightToDisconnect.

I had a very inspiring boss at Boots PR, Oonagh Turnbull. She was a strong woman and a mother, my mentor you could say. Also entrepreneurs I work with motivate me, seeing people leave their secure jobs and take a punt on things. And I met Lynne Franks, she was one of my first female PR role models and so inspirational.

Personally giving birth to my daughter, Audrey, and in terms of business, coming back to Manchester and opening our head office here seven years ago.

I have my human alarm clock who jumps on me about 6.30am every morning followed by a family breakfast. I walk to the station in my trainers (heels in my bag) and take a train into Manchester to reach the office by 9am. I try to do my most productive work in the morning as that’s when I work best- strategies, proposals, press releases etc. We regularly conference call across our sites to delegate what needs doing. I have client lunches most days with meetings most afternoons, and I’m home by 6pm to bath and put Audrey to bed. Then I cook, read and have an early night. I’m generally in bed by 10pm except when we have evening launches. I also work in London about once a week.

I love going on walks with my family, and cooking or eating out.

Build relationships with people whatever level they are on, as you never know when you might cross paths again and where they might be or what they might be doing when you do.

I guest lecture at Nottingham Trent University so maybe something more academic in the same area, or journalism.

I’m a farmer’s daughter and I was known to do a bit of haymaking, delivering lambs, and sheep shearing whilst growing up. My parents still have the farm and I love taking my daughter there now although I don’t do any of those things anymore.

Neither but if pushed I would say Blue because they are the real football team of this city.

This whole area around Old Granada Studios – the media and production heritage here (I’m such a big fan of Corrie) plus the fact we had our Manchester wedding celebrations at Great John Street Hotel next to the park where we went for picnics when dating. I love Beetham Tower as wherever you are in Manchester you can still see it. And Cote Brasserie is my best kept secret. It has great coffee, great wi-fi, I have my own table there and it’s where I do some of my best work.

As Manchester is on the up, so is our homeless problem. I wish that could change. We are currently working with the Joseph Cox Charity that houses vulnerable men in Manchester.

The people, the rhythm of the city, its humour and its spirit.