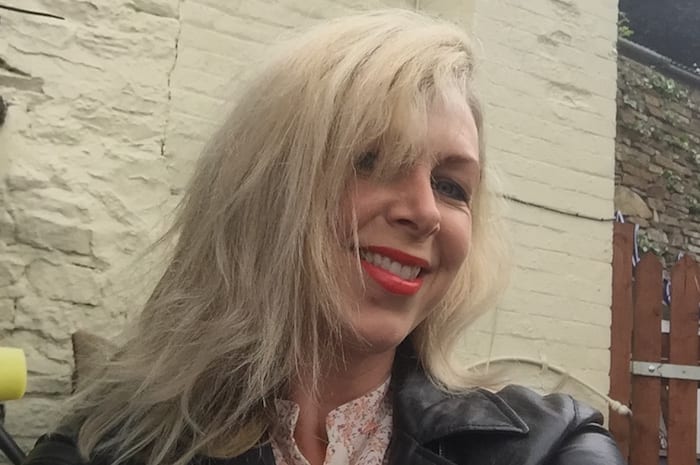 Jane Weaver has been on the Manchester music scene for over twenty years with bands like Kill Laura and Misty Dixon and solo material including collaborations with Doves, Cybotron and Badly Drawn Boy. Her psychedelic, avant garde, and alternative melodic pop received critical acclaim with the release of her sixth solo album, The Silver Globe, in 2014. After almost two years of touring, this week sees the release of her limited edition transparent amber vinyl, The Amber Light, on Finders Keepers Records. She is married to Finders Keepers owner Andy Votel. They have two children.

When I was five, I saw Kate Bush on Top Of The Pops and became obsessed with her and her music. I decided I was going to be a singer come hell or high water and that was it! I was quite a shy child up to that point so I joined the school choir, and even though I would go bright red for every performance I just forced myself to do it.

My husband has been quite helpful and instrumental in areas of my career, not in my writing, but in wanting to put records out. He made me realise I didn’t need to be controlled by a record company, as I had been in my early twenties, and I learnt to do it all for myself. Or even on collaborations, great people I have worked with, he would say ‘just ring them up’. Most people would never dream of approaching big names and he gave me the confidence to do that with some great results.

When I was younger I used to compete and win lots of medals in ballroom dancing. In those days it was all sun shimmer and American tan tights.

Being a mum. How bizarre is that? And involving them with what you do as a creative person. Although I have to say they are quite blasé about it all. We took them to Glastonbury when I was playing there, and they’re just like ‘oh yeah, mum’s playing Glastonbury’ as if it’s an everyday occurrence!

I get up before 7am and get all of the morning business out of the way, getting the kids off to school and stuff. Then I work mainly from home, sometimes in a studio, and I will be writing lyrics for a good part of the day. It’s sometimes hard to concentrate at home though, so I often drive to Edale and just sit in the car park there. I play my music and listen to what I’ve done in the studio, I listen and listen, and think about how I can make it better. Then I rush back for the kids, to sort the tea and all the fundamental things you have to do being a mum.

I like to do absolutely nothing, you know just lying on the couch and watching crap TV, although there’s only so many property shows you can watch without getting completely bored so I don’t do it that often! But yes, something that requires no thought or creative input.

James Lavelle once said to Andy, keep hold of as much as you can for as long as you can. Being quite protective of my art and my creativity, this always resonates with me.

Before I got a record deal I was at art college and had planned to study either fine art or fashion at Brighton. So either of those two. Or other than that, one of my jobs previously has been as an estate agent, selling houses. I’m still a bit obsessed with property.

When I came to Manchester, the first match I went to was with Rob Gretton to watch City and they lost. I think I had a pie and half a pint or something.

Which are your three favourite places in Manchester?

I feel at home in the Northern Quarter. Affleck’s Palace, even though there are some things that are quite naff about it. I love the way it’s consistently the same. My daughter’s getting into it now as she’s discovering more alternative clothes, hair dye and shiny things! And I really want to go to the new place Volta are opening in The Palace Hotel (The Refuge.) We were at their place in Didsbury yesterday and we had some food which was just fantastic, so yes really looking forward to their new one.

I’m not against the boy guitar band thing, but it’s just very predominant so I wish Manchester would be more progressive, diverse, and include more female artists. It needs to move more with the times to change its national impression.

When I first came here it took me a while to get the completely different sense of humour here, very wry and dry. I’ve got used to it now and understand it better!

Jane Weaver is playing this years’ Tramlines Festival in Sheffield on Sunday 24 July.