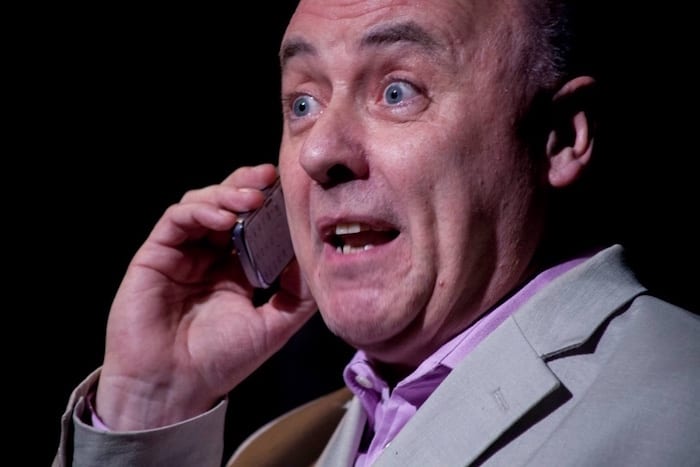 You may recognise James Quinn. He’s currently on our TV screens in Coronation Street playing DS Willets as part of the Phelan/Eileen storyline. He’s also starring in his own play, Equivalent later this month in JB Shorts, six fifteen-minute plays by established TV writers at 53Two.

In the autumn, he will be re-creating the role of Phil the dodgy copper in Early Doors Live at The Lowry prior to a UK tour. And he’ll be playing Elder Brian in the film Apostasy which goes on general release in September.

How did you get into acting, writing and directing?

I failed my A Levels – twice. Not something that I’m recommending but it happened to work out for me. During my repeat A Level year, I wrote, directed and acted in the school sixth form revue. Someone asked me if I’d ever thought of doing it for a living. I thought little of it. After the second set of unsuccessful results, I got a job at Humkos in Trafford Park. One evening after work, I wandered into Davyhulme Library and saw a sign for O Level Drama at night school at South Trafford College. I signed up. My thought was to maybe do some amateur acting but the tutor, Kevin Cahill, was so encouraging and it was such a good group that I ended up applying for a couple of drama schools. Drama Centre knocked me back but Manchester Poly (now MMU) took me on. I did the three year course there at the wonderful Capitol Building (formerly ABC Studios where they used to do Opportunity Knocks). After that, I got a job with the highly respected local community theatre company, Pit Prop Theatre. After two years there, I got my first rep job at the Dukes Lancaster where I worked with, among others, Andy Serkis making his professional debut. Then I just went on from there. My first TV job came four years later as the Tranmere Rovers football coach in Brookside.

There have been many. I’ve learned much from directors I’ve worked with including Vicky Featherstone, Paul Miller, David Thacker and Chris Honer who I’m about to work with once more in JB Shorts 19. The single biggest influence on me as a creative person was undoubtedly Julia Cameron’s book The Artist’s Way. Doing this course completely re-invigorated me as a creative soul. I learned to become a ‘beginner’ again, started to write poetry and this, in turn, led to me to become UK Allcomers Poetry Slam Champion 2000 and to create the character, Sir Ralph Stanza, poet-in-residence for Salford which I developed into a Radio 4 comedy series. It also led me to do the MMU Writing School Poetry MA where I got to work with the likes of Simon Armitage, Jeffrey Wainwright, Michael Schmidt and Carol Ann Duffy, who later guested in Sir Ralph Stanza.

Either bringing to life Phil, the dodgy copper in Early Doors or being part of JB Shorts. The idea of Trevor Suthers and John Chambers, JB Shorts has developed a huge following among non-theatre goers and theatre fans alike and has forged an enviable reputation as a home for affordable, inclusive, entertaining theatre with a cutting edge. JB Shorts has just won the Stage Door Award for Excellence at the 2018 Manchester Theatre Awards. And it has provided me with some of the happiest and most fulfilling times in my thirty six years as an actor, writer and director.

It depends which typical day you mean. Recently, I’ve been back filming as DS Willetts in Coronation Street. A typical day there would mean an early drive to the studios followed by a day on set interrogating a variety of suspects, including my ex-wife and great friend, Sue Cleaver (Eileen Grimshaw). At one point, Sue had to look me in the eye and say the line, “I married a monster.” After we’d cut, I suggested she hadn’t needed much motivation to say those words! Meanwhile, another typical day might involve learning lines and preparing for JB Shorts rehearsals as well as getting through the admin and promo which is part and parcel of each JB production. JB 19 will be our fourth outing at our new home 53Two, the excellent and vibrant arts hub.

I commentate for FC United of Manchester on FCUM Radio. I watch sport. I hang out with family, including my four-year-old grandson. Another way of relaxing is through political work. Recently, I’ve been part of a group which has organised support for First Bus Drivers in Rusholme who have been striking in search of greater pay parity with their colleagues in other local depots. Our protests have attracted support from councillors, local residents, pensioners and political activists and have provided a massive boost in morale to the striking drivers.

The day you think you’ve got it cracked is the day you start to fade away.

If things hadn’t work out this way, what would you been doing?

Something less fulfilling perhaps? At A Level, I was studying French and German. Had I done better at my exams (my illegible handwriting and too much time spent watching the 1978 World Cup can’t have helped my chances), I would have likely studied those at Uni/Poly and maybe gone on from there. Maybe. Who knows, maybe some other unforeseen door might have opened.

I was a Level 2 basketball coach who guided St Paul’s Primary School, Withington to the Greater Manchester Basketball Trophy in 2007. My son, Elliott, played in that team.

I would like to see a resurgence of home-grown, fully-funded live theatre on the scale that existed when I first entered the profession. In those days, the Library Theatre Company (now absorbed into HOME) staged all year-round programmes in two theatres; including cutting edge modern plays, classics, musicals, new plays by local writers and pantomimes. Contact Theatre also was a full-scale producing theatre. As an actor, I, like many others, cut my teeth in these venues in a wide variety of roles. In 2018, there are too many talented young actors and writers not being offered the opportunity to develop their craft on Manchester stages.

Finally, what do you love the most about Manchester?

I love Manchester’s ability to accommodate its many personalities. Its culture, its internationalism, its history, its sport, its mancunian-ness. The city is an international playground wrapped up in a fiercely local hotspot.

Early Doors Live at The Lowry is sold out but additional dates at Manchester Arena have been added.