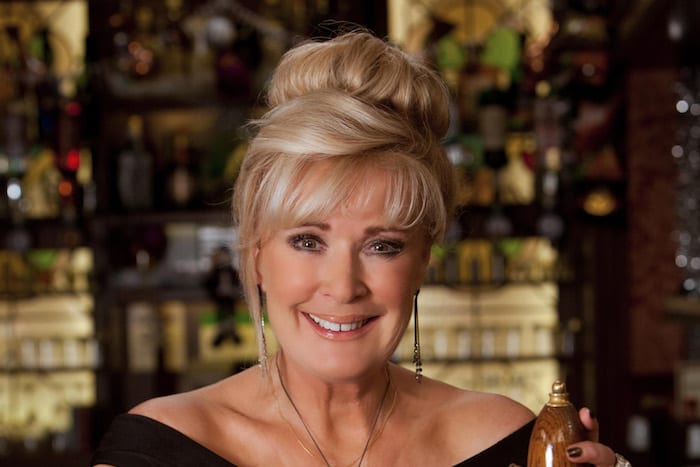 She first appeared in the ITV soap in 1984 as a different character and didn’t actually take on the role of Liz McDonald until 1989. Since then, her character has been involved in just about every single soap storyline you can think of.

And who can forget her performance as sex addict Flo Henshaw in early 2000’s sitcom Two Pints of Lager and a Packet of Crisps – easily her funniest role to date.

She is going to be very busy over the next couple of weeks. From 9th-26th January, she is stepping into a completely different role as The Narrator in The Rocky Horror Show for the Manchester leg of its UK tour, juggling filming for the ITV soap by day with performing at The Opera House by night.

I was in my first play at school when I was 7 and I played the title role and basically crossdressed at 7 years old. And after that I just knew that I didn’t want to do anything else. And now I’m working on Rocky Horror which is full of crossdressers so it was just fate. It’s meant to be.

There’s so many. Barbra Streisand, Bette Davis, Judi Dench, Diana Rigg and Glenda Jackson. My daughter was actually directed by Judy Dench as well which was amazing and quite weird. All these great actresses just really do inspire me.

Hopefully Rocky Horror will be one of them – I’m really hoping so anyway. I’ve had some time off from Coronation Street but I’ve only had three rehearsals before the show. I rehearsed on Friday for the first time – and then we did another rehearsal yesterday and have one tomorrow. So I’ve only had two and a half days really. But I’m quite proud of everything that I’ve done so far in my career so it’d be quite difficult to choose.

This is going to be the most boring answer in the whole world. A typical day of mine is get up at 6am, get myself ready – go to work, film all day and will usually get home at about half 7 in the evening, take my camera make up off, have a shower – learn my lines for the next day and then go to bed. And that really is a typical day.

I have to tell you, I’m so unglamorous. When I’m at home I wear massive tracky bottoms, one of my husband’s t-shirts and no makeup whatsoever. Because I have to wear such hideous clothes on Coronation Street, I’m a complete slob in real life.

The best is yet to come.

It would have been fitness. I used to do acting and fitness alongside each other. Years ago I was on stage earning equity minimum and I was a single parent for a long time and alongside that I took 26 classes a week coaching bodybuilders. I worked with Mr Universe contestants and all sorts of people from that industry.

In February I’m hoping I’ve got a few days off from Coronation Street. I’m doing a course in plastering. I love painting and decorating and doing bits of work on the house. I love restoring old furniture and I really want to do this course to learn how to plaster.

Normally I would be a Red – and I have to be careful because my husband is here – but I have to admit, I do fancy Pep Guardiola.

Obviously I’ve got to say The Opera House. But I do love it and I’ve worked here quite a lot. Coming back here is a bit like coming home. I love St Ann’s Square. And I adore Manchester Cathedral, it’s stunning.

I would really like there to be no homeless people on the streets. I think everybody should have a home.

I love that you can escape to a bit of countryside not too far away but then if you want to party, Manchester has it all. Fantastic restaurants, bars and theatres. Manchester is buzzing and has just about everything you need really and that’s what I love about the city.