More than 100 senior managers from businesses across the region have now signed up for the sleep out at Old Trafford cricket ground on Monday October 16.

With each participant targeted to raise over one thousand pounds, the event could raise in excess of £100,000 to help the most vulnerable people in Manchester and support CEO Sleepout’s national campaign.

The event involves the people participating swapping the comfort of suburbia for a sleeping bag.

After the success of last year’s event where £64k was raised for the homeless in Manchester, the event is again being held at Old Trafford Cricket Ground where business managers and owners will get a taste of the what it’s like by braving the worst that the elements can throw at them for a night outside.

Last year the money raised was distributed by CEO Sleepout, that organises similar events across the UK, to local charities including MASH, Mustard Tree, Depaul, Lancashire County Cricket Club Foundation, The Booth Centre, The Church Urban Fund and smaller causes along with contributing to the CEO Sleepout national causes.

According to national homeless charity Crisis, while the vast majority of rough sleepers are male, life for women on the streets can be particularly bad, with one in four women sleeping rough having been sexually assaulted in the past year, three in ten being the subject of sexual violence while homeless, and six in ten being intimidated or threatened with violence.

On top of the dangers of living on the streets, the recent Spice epidemic, makes it all the more important to help vulnerable people escape the trap of street life.

“It’s become frighteningly common to walk across the city centre and see people passed out in the middle of pavements or even in the gutter,” said Andy Preston of CEO Sleepout.

“It’s vital that we provide help to these people as Spice has had a profoundly disturbing impact, worsening the conditions for many and making the streets an even more dangerous place to live than before.” 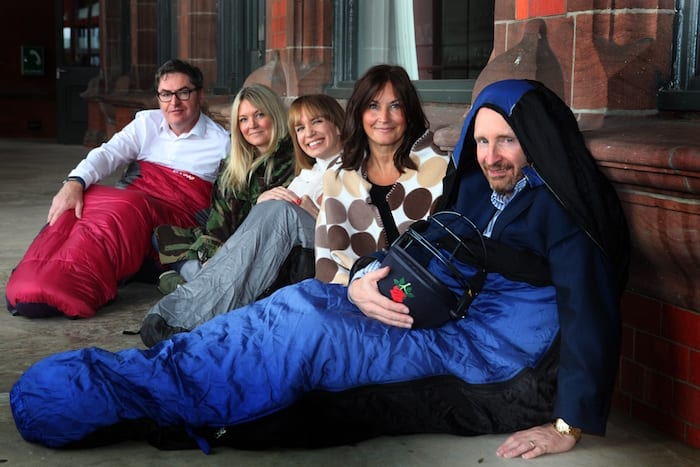 I Love Manchester CEO Chris Greenhalgh is doing the sleep out to raise awareness about the problem of homelessness in the city. Donate here

“This is an issue that won’t go away and I know that a lot of people, especially women, no longer feel safe walking around the city at night. I think this is a huge shame and I felt compelled to try and do something, even in a small way.

“I appreciate that a one night sleep out doesn’t do justice to the difficulties of homelessness in the city. However the point is to raise awareness and that’s what I hope to do.”

And what if it rains?

“I can take shelter. And I’m pretty used to the rain. This is Manchester after all.”

CEO Sleepout Manchester 2017 is one of 8 sleepouts to be staged across the UK this year by CEO Sleep Out, with the aim to raise more than £500,000 in total.

The charity has seen over 1,000 executives take on the challenge and raised over £1,000,000 to fight homelessness and poverty in the UK since launching in 2013.

There’s still time to sign up for this fantastic fund-raising event, to register or pledge your support to fight homelessness and poverty in the city visit the CEO Sleepout website.