From derelict theatres to eerie dressing rooms and city skylines, the Granadaland Gallery offers a unique insight into the heart and soul of the old TV studios
Share
Tweet
Share
Chat

It’s 60 years this month since Granada Television began broadcasting from its Quay Street studios. It went on to produce some of the most memorable and remarkable programmes of the era including Brideshead Revisited, World in Action, and, of course, Coronation Street.

The studios closed in June 2013. ITV Granada and ITV Studios moved to MediaCityUK and the site was sold. The building is currently being used as offices before being redeveloped as a hotel.

Now images have been released from Granadaland Gallery,an online creative archiving project commissioned by Allied London, the site’s owner, to capture and archive one of Manchester’s most iconic locations before the next phase in its redevelopment as St John’s, Manchester’s new neighbourhood for enterprise, living and culture.

The Granadaland Gallery combines fine art photography and imaginative place-writing to document the spirit, history and architecture of the old studios. 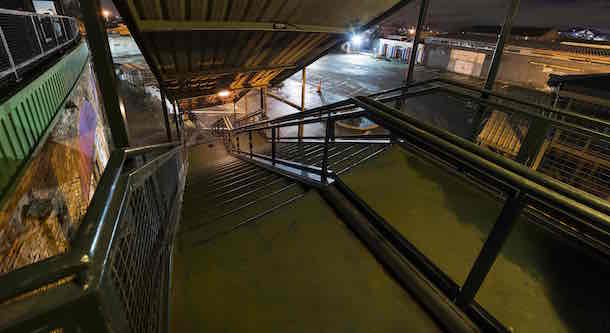 Pictured: Looking onto an empty Grape Street at night; the home of the very first outdoor Coronation Street set from 1968 and to a bustling New York street set built for tourists from 1988 to 1999.

“Our aim is to open the doors to the studios the public may never have seen, to celebrate the achievements and moments that happened here and to ensure its legacy lives on beyond bricks and mortar,” says St John’s director of culture, Katie Popperwell.

Accompanying text by writer Hayley Flynn approaches the site as if the pair were the first people to rediscover it, like urban explorers to an abandoned theme park, making field notes to document everything they experienced throughout the process.

“The site is one of multiple historical layers that have been integrated over the years rather than demolished,” says Hayley Flynn. “I thought that the very nature of building around and over things was a practice that was perhaps lost in this country and so the site serves as a unique snapshot of the ages of Manchester.”