If you walk through the doors of leisure destination Great Northern Warehouse, you’ll be welcomed by Maxine Peake, Sir Ian McKellen, Bobby Charlton and Liam Gallagher amongst others.

Not in person, of course, but in a series of portraits in the unmistakable style of local artist Stanley Chow.

They are part of an exhibition of Great Northerners which celebrates ten influential local people who have made the world a better place.

Great Northern Warehouse asked visitors to vote for their greatest northerner of all time. Artists, innovators, sports people, actors and political activists who have made the world a better place.

Now the final shortlist has been revealed and the nominees immortalised in Stan’s portraits. 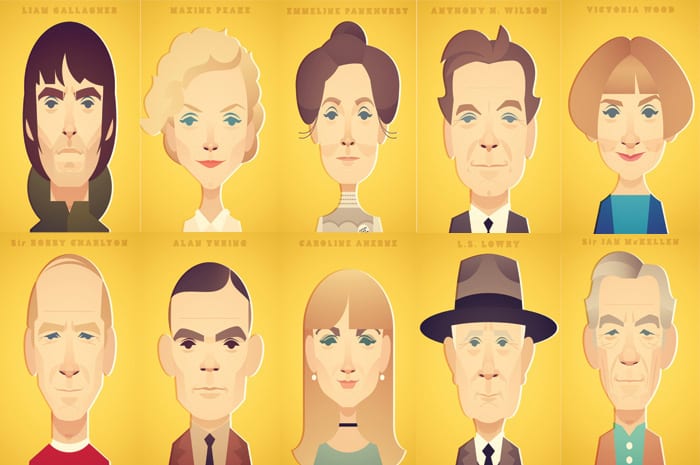 Iconic, bold and fun, are three words Stanley would use to describe his work, which manages to capture faces and personalities in simplistic yet compelling drawings.

I find him in front of the Great Northerners, looking relaxed and pleased with the results of a project that took three months to complete.

However simplistic the illustrations may seem at first sight, the creative process is complex, as Stanley explains.

“I try to capture each person through a few years. So if you look at each character, it’s not necessarily him now, but him at 40, 50 and 60.”

How does he actually manage to do that?

“Well, you have to look at the whole face, all the angles. I try to find as many images of one person as possible basically and then to kind of merge all of them into one person.”

He found Bobby Charlton the most difficult to do from this series. And his favourite?

“Ian McKellen. I couldn’t really say why. Maybe it’s because I’ve managed to capture his gruffness, but he’s also quite a warm person at the same time and I think I’ve managed to get that as well.”

He asks me if I have a favourite. I point out that Maxine Peake looks very much like her.

“Yes, I like how she looks there next to Emmeline Pankhurst. I’ve actually recently worked with Maxine on a little project. I’ve sent her the print and she liked it.”

Stan admits that he still gets nervous when he shows the people he draws the final result.

“I don’t usually send them over for them to see them. If they find them and they like them, good. But I don’t like to send them.”

Not all of the people portrayed were born in the north west, so Stanley feels someone else should’ve been included in the exhibition.

“Bobby Charlton was born in Durham and Caroline Aherne was born somewhere down south. So because of that I would’ve put Sir Alex Ferguson in instead of Bobby Charlton.”

Who would be Stanley’s favourite northern figure?

“I don’t know really but it would definitely be a footballer.  I’m a big Manchester United fan, so Ryan Giggs or Paul Scholes even. One of them.”

And what inspires him to make his art?  “Wanting to clear my mortgage,” he replies laughing.

The artworks have been uploaded to the Great Northern’s Facebook page where you can vote for your favourite with a like.

The person whose portrait receives the most likes by Friday 1 December will be crowned the Greatest Northerner of them all.

Who will get your vote?