Cottonopolis first landed on the scene in 2016, pinching Australasia chef Joe Grant to lead its NQ kitchen team with an innovative menu of Japanese-inspired small plates.

Following his departure to D&Ds Issho in Leeds earlier this year, we’ve been curious to learn what sort of stuff his replacement is made of.

Well, this weekend we found out.

We headed down on Sunday, eager to be the first to try their latest concept: bottomless Yum Cha. Billed as ‘dim sum and then some,’ we simply couldn’t resist.

For the uninitiated, Yum Cha is a Cantonese brunch tradition typically involving lots of dim sum (a selection of light snacks or meals) and Chinese tea, but naturally, being Cottonopolis, they’ve given the offering their own distinct Japanese flavour.

Spread out over a two-hour sitting, Cotton’s version allows you to eat as much – or as little – as you like for just £26 per head. A proper bargain in a venue where a single small plate will usually set you back at least £8.

We arrive just before our 8pm slot, stepping out of the torrential rain into the bar’s sleek and stylish settings. 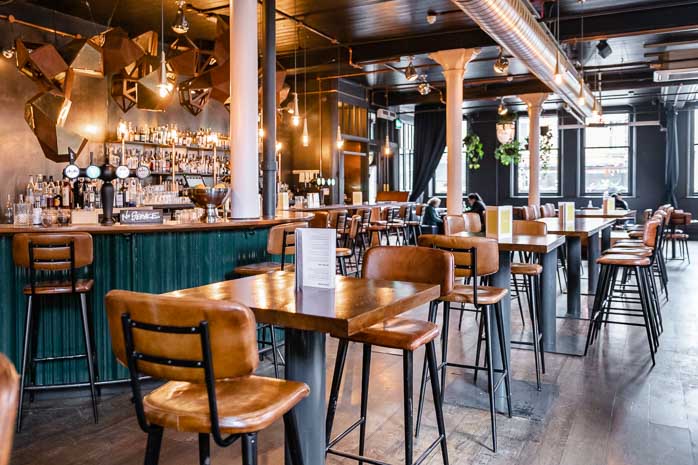 A warm welcome and then we’re seated in one of the deep comfy booths that line the back wall. It’s the perfect position for drooling over the pass, lined as it is with maybe 50 to 100 little morsels of gyoza.

There is a selection of 19+ dishes to choose from, all of which come out at a leisurely pace and are pushed around the bar on a traditional trolley which stops at each table.

We’re told we can keep whatever takes our fancy, our server encouraging us to take two plates at a time. However, with eyes bigger than our bellies and too many tasty options to choose from, we find our table filling up rather quickly.

And so we get to work on a plethora of dishes, devouring springy and sticky pockets of prawn and duck gyoza, a big ol’ bowl of wilted pak choi in a sweet and earthy oyster sauce, and refreshing soba noodles with matchsticks of carrot and hearty chunks of duck meat.

Next comes sweet and tangy duck spare ribs with perfect crispy fat, a hugely satisfying box of vegetable tempura, and a fresh raw salad sprinkled liberally with black and white sesame seeds. A tantalising hint of star anise on the duck leaves a spicy-sweet taste in the mouth.

But top highlights have to include the mushroom congee – an immensely gratifying bowl of savoury rice porridge – and a simple crunchy chicken katsu fillet drizzled in kewpie mayo. Sometimes, it seems, less is more – even when you’re dining bottomless.

Apparently not full enough, we also indulge in dessert. Opting for one of each in the name of fairness, we swipe a heavenly plate of mini doughnuts, a dried-raspberry cheesecake and a handful of glazed where can i buy cialis yahoo pineapple buns.

Of course, this being Cotton, we have to do their cocktail list some justice too.

For some unfathomable reason, they’ve been frequently overlooked at the MFDF awards, losing out on the best bar award two years running, first to Alberts Schloss and then to Science + Industry.

Last year, though, they finally got some much-deserved recognition at the prestigious Imbibe award, taking home the ‘Avant-Garde’ award for their Japanese idiom-inspired third-generation cocktail menu and scooping up ‘Overall List of the Year’ from under the noses of big London bars like Sexy Fish and Artesian.

Oh, and their now-General Manager Gethin Jones, the brains behind it all, also took home bartending personality of the year. Enough accolades already?

Sadly the award-winning idioms menu has just been replaced, but, on the flip side, that made us some of the first to sample the new fourth-generation list.

It’s inspired by the principles of Japanese aesthetics: a set of ancient ideals that underpin many Japanese cultural and aesthetic norms on what is considered tasteful or beautiful. And there’s also a clear focus on ingredients, textures and aromas.

Split into five sections – Wabi Sabi, Miyabi, Yugen, Iki and Shibui – each takes inspiration from an individual principle and seek to translate that into a series of drinks to reflect on life’s little pleasures. It’s all very clever.

Favourites include the Botanicals, Berries and Yuzu (an elaborate Bramble twist garnished with pearls of yuzu caviar) and the Gin, Peach and Chrysanthemum, in which eucalyptus paint is used to stain the glass cerulean and give a refreshingly minty finish to what is an otherwise vibrant, citrusy drink.

We’re just as impressed with the Bourbon, Wagyu and Orange – a cheeky old fashioned that tastes surprising like steak thanks to the unwittingly genius addition of caramelised Yorkshire Wagyu.

And the Sea, Smoke and Sage makes a fine impression too – and not just because it’s probably the only place you’ll get Johnny Walker Green Label for £10 on a Manchester menu. Applewood smoked dulse (seaweed) combines with blackcurrant sage, green walnut and smoke house kombucha to give a bittersweet taste that makes us think of Chinotto.

Over the past few years, Cotton has staked its reputation on two things: a series of incredible cocktail lists designed predominantly by Gethin Jones and a sensational menu of Japanese small plates. Ok, three things – the music there is always great, too.

Recently, the food offering has developed monumentally, with new menus joining the ranks to cater to hungry brunchers and Sunday lunchers looking for something a little more exotic than the usual fare. And the new Yum Cha offering is another welcome addition.

A triple threat, Cottonopolis is one of the crown jewels of the Northern Quarter bar scene. If it’s not already on your list, we strongly suggest you put it on. Like, right now.