You will love these hand doodled illustrations of Manchester icons 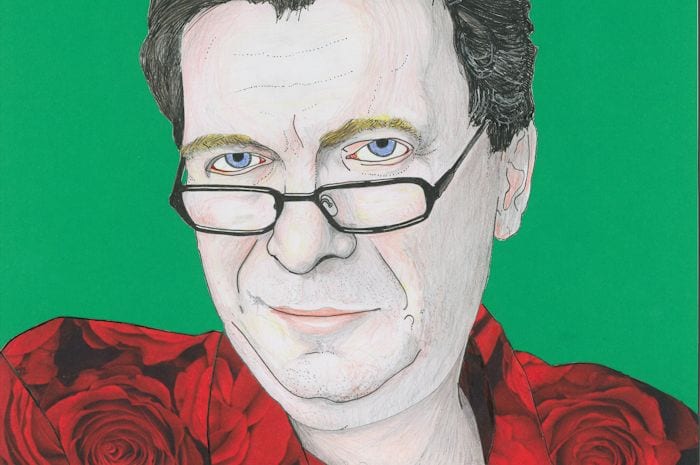 Back in January, Dunstan Carter decided to leave his job heading up sales on the Prolific North Live media expo to embark on a new career as a freelance illustrator. Now he’s completed a project illustrating fifteen Manchester Icons.

The idea for the Manchester Icons collection first came to him after he created three portraits for a local digital agency.

“I started ramping up the amount of illustrating I was doing in 2014. I was working for the digital agency Modern English at the time and they asked me to provide some art for the office walls.

“I’d recently completed a couple of commissions of Manchester music icons and I thought that idea would fit nicely. I did portraits of Mark E. Smith, Shaun Ryder and Tim Burgess and they went down really well with agency colleagues and visiting clients.”

His approach to portraiture is bold and stylish and involves working on coloured card, incorporating elements of collage and an old fashioned cut and paste technique that have led some people to think they’re paintings. But there’s no paint involved.

“I really enjoyed illustrating the Manchester icons for the Modern English office so I decided to concentrate mainly on drawing portraits of music, film, TV and sports icons – and do lots more Manchester icons too,” says Dunstan.

“At that point I’d discovered a style I liked to use which involved illustrating onto bits of coloured card using pens and pencils – no paint – incorporating collage and then piecing each portrait together at the end with scissors and glue. No Photoshop or Illustrator, just simple old fashioned illustration with a bit of collage thrown in. So many illustrators do everything using purely digital methods and I want to stand out and offer something different.”

Dunstan didn’t go to art college but he’s always had a love for art and it’s been a big part of his life.

“I’ve always been a creative person at heart even when I was working in sales roles,” says Dunstan, who is originally from north Wales and came to Manchester in the nineties to study. “I studied drama at Manchester University, sang in bands and wrote poetry, but the one thing that always remained a constant was my passion for illustrating.”

It remained a hobby until people started to encourage him to draw more and he started to think seriously about it becoming a potential career. Since then, just through word of mouth, he has undertaken lots of commissions, illustrated Alligator Snaps, a children’s book, and worked with a number of Northern bands and comedians.

Since 2014, he has completed around 60 or 70 portraits, designed the odd sleeve and poster for bands and comedians and ended up taking on  a number of commissions, from the bizarre (Donald Trump and Margaret Thatcher sharing a strand of spaghetti) to classic sporting icons and much more.

Dunstan is open to offers from businesses and brands across the UK to create unique, bespoke art for office walls, publications, packaging, websites, bars, restaurants, and much more.

“I’ve been doing a lot of portrait work over the past few years,” says Dunstan, “but I’m eager to take on all kinds of different illustration projects and assignments.”

To see the rest of Dunstan’s Manchester icons and more visit www.dunstandoodles.com