Book review: Yesterday We Were in America – the story of Alcock and Brown’s epoch-making flight 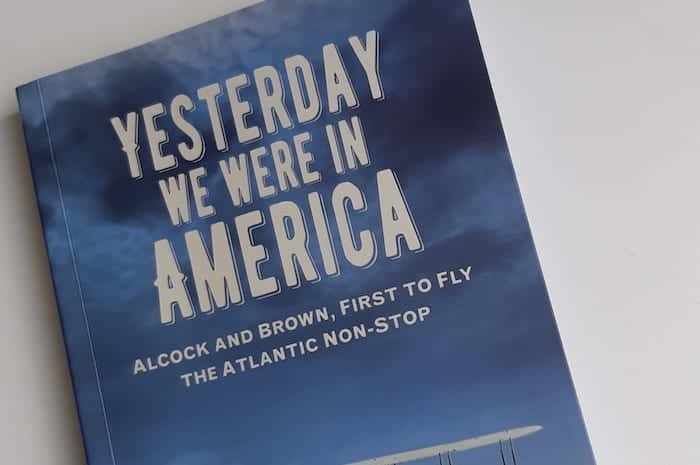 The English thriller dates from the late 19th and early 20th centuries when a coterie of writers produced a series of ripping yarns like John Buchan’s 39 Steps and Henry Rider-Haggard’s King Solomon’s Mines and She.

But no yarn was more ripping than the real-life exploits of John Alcock and Arthur Whitten Brown, two airmen from Manchester who, against all the odds, flew non-stop across the Atlantic Ocean in June 1919.

Perhaps it is fitting then, that the foreword to Brendan Lynch’s gripping Yesterday We Were in America (The History Press, £18.99) was written by one of the foremost thriller writers of our time – Len Deighton.

Deighton, author of the Harry Palmer novels The Ipcress File, Funeral in Berlin and Billion Dollar Brain, is also an acclaimed writer of history, not least Fighter: True Story of the Battle of Britain.

In his foreword he observes that the story of Alcock and Brown’s historic flight – a mere 16 years after the Wright Brothers pioneered powered flight for the first time – has been “shamefully neglected”.

Deighton adds: “In these days of ruthless competition it is satisfying to record that Alcock and Brown were attractive and modest heroes who became close friends. Brendan Lynch, in this excellent book, tells their story with the skill of a dedicated researcher and the talent of a popular novelist.

“Yesterday We Were in America is a very fine book, I only wish I had written it.”

Praise indeed for Lynch, an Irish journalist and author, whose fascination with Alcock and Brown’s story started in childhood after seeing the evocative images of their flimsy Vickers Vimy bomber nose down in a bog near Connemara.

The crash landing ended their epic 1,900 mile flight from Newfoundland in an open cockpit through appalling weather conditions.

The book was first published in 2012 but the new edition is  timed to coincide with the 100th anniversary of the Atlantic crossing, which falls on 15th June 2019.

Lynch’s painstaking research, begun in the wake of Steve Fossett’s re-enactment of the historic flight in 2005, reveals how John “Jack” Alcock, born in Seymour Grove, Firswood, Manchester in 1892 and Glasgow-born Arthur Brown, who moved to Manchester at an early age, were both prisoners of war during World War I.

Despite living in the same city and sharing aviation interests, they didn’t meet until Vickers had given the transatlantic project the go-ahead. They made for an ideal pairing.
They were treated as heroes after their flight and both men were knighted within days by King George V.

Alcock and Brown flew to Manchester on 17th July 1919 and were given a civic reception by the Lord Mayor.

Tragically, and perhaps one of the reasons why their heroics faded into the mist of time, Alcock was killed in an air crash only six months later.

Let’s hope this book helps to secure a proper place in history for a monumentally courageous feat.