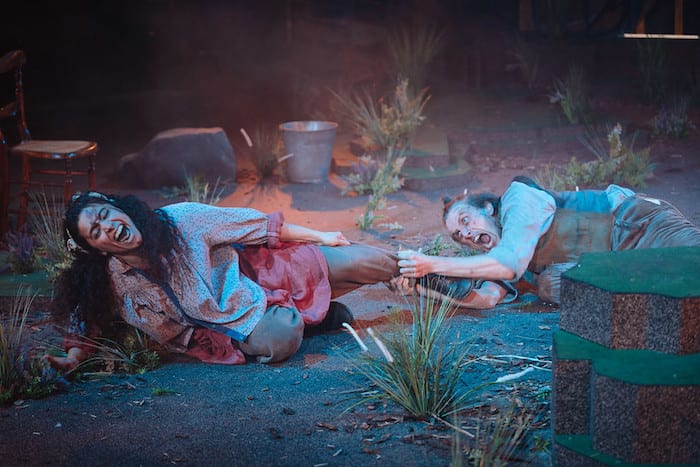 Even in the world of great literature classics, Wuthering Heights is a very special story.

A tale of an obsessive and passionately toxic love that can never truly be, the characters in Emily Bronte’s novel are as wild and unruly as the austere landscape in which it is set.

This wildness gives Wuthering Heights a certain power. It also carries within it an inherent strangeness and a strong feeling of the uncanny.

All these sensations are fully embraced in The Royal Exchange Theatre’s new adaptation, brought to the stage by the theatre’s new artistic director Bryony Shanahan. 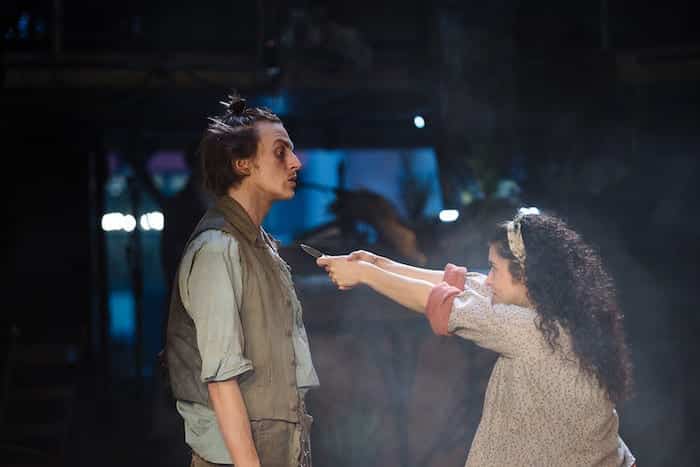 The new production doesn’t shy away from the story’s violence, nor from the toxicity of Heathcliff and Cathy’s relationship. What’s more, it makes them equally complicit, not just in their own misery but in the other characters’ too.

Embracing the tale in all its harsh inhospitability, from the landscape to the conduct of the characters themselves, Andrew Sheridan’s script mostly focuses on the first half of Bronte’s novel and is wound through with repetitions and echoed refrains.

Joseph, the family’s cantankerous and pious manservant, is gone – as is Mr. Lockwood, who functions well in Bronte’s original tale in his role of trusty narrator alongside housekeeper Nelly Dean.

Edgar Linton is wetter than ever, while his sister Isabella serves to offer us some comic relief amidst Cathy and Heathcliff’s intense and brutal showdowns. The Lintons’ characters are diminished somewhat, veering into jester-like territory in places. 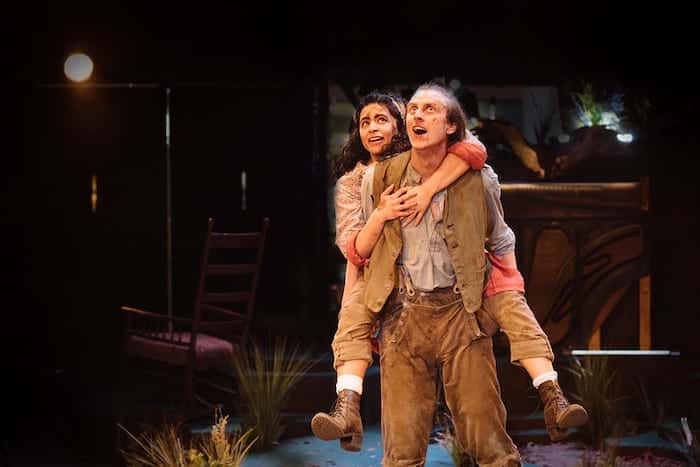 A haunting, misty set from Cécile Trémolières puts the wild and untameable landscape centre stage, allowing the destructive and consoling powers of the wilderness to be just as much a part of the play as the characters themselves.

Altogether, between its look and feel and the incessant talk of death, the show feels somewhat other-worldly.

Even more so in its second act, when flora and fauna are stripped away to expose a barren landscape of boulders and arid earth as relationships turn sour and Cathy enters into a fatal mania.

Wuthering Heights is generally known as a classic tragic love story, but this production really opens the door to the problematic relationship at its heart.

Rakhee Sharma’s impassioned and unruly Cathy manages to be both heartless and tender, whilst Alex Austin is truly bewitching in the role of Heathcliff.

Powerful, wild and intense, this heartbreaking portrayal of tortuous love has the power to draw tears from even the most stoic observer.

Wuthering Heights is at The Royal Exchange until Saturday 7th March 2020.