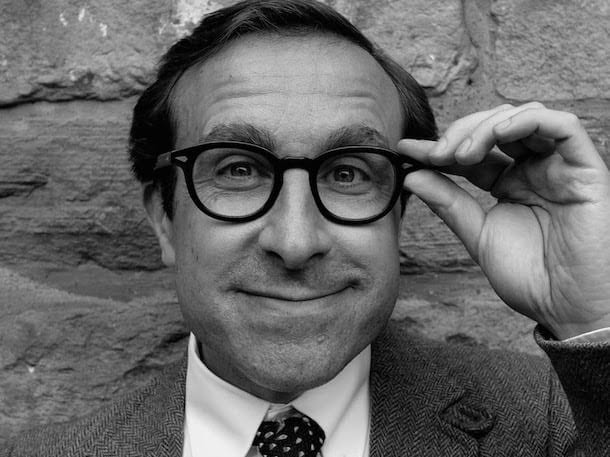 Lots of bands have tribute acts, but not many comedians. Woody Allen has one. He’s called Woody Allen-ish and he was in Manchester yesterday
Share
Tweet
Share
Chat

For anyone who isn’t a fan or old enough to remember, Woody Allen wasn’t always an actor and prolific film maker. He’s also a writer, playwright, and musician, too. Clever sod.

Before he made not very good films like films like The Curse of the Jade Scorpion and Whatever Works, he made great, award-winning films like Manhattan and Annie Hall. And before that, funny ones like Love and Death and Take the Money and Run. Some of them very funny indeed.

In fact, he’s a bit of a comic genius. He got his first joke published at the age of 16, became a TV writer and, for a brief period in the 1960s, he was a stand-up comedian. According to Comedy Central, he’s the 4th greatest stand-up of all time (behind Richard Pryor, George Carlin and Lenny Bruce, in case you’re wondering). He was that good.

Sadly, there’s more chance of a rain-free week in Manchester than there is of Woody Allen performing in New York, let alone Manchester. To find out just how funny he was you have to buy a CD or watch clips on You Tube including, curiously, a full half-hour programme of his stand-up made by Granada TV in 1965 when he was over here making a film.

Or you could go and see Woody Allen-ish, a Woody Allen tribute act. It’s the closest anyone in Manchester (or anywhere else for that matter) is likely to get to seeing Woody Allen perform a stand-up routine these days.

Mr Allen-ish tells lots of jokes and stories from Woody Allen’s stand-up routines. Most of the material is still very funny, even if you’ve heard it before. Like the story about the time he was kidnapped. “”My parents snapped into action. They rented out my room.”

However, some of it hasn’t travelled too well through time or space. Some of the references wouldn’t mean much to non-Americans and some of it wouldn’t pass the politically correct test.

But the sheer pleasure of watching Woody Allen-ish is in the performance. He looks like Woody Allen (apart from the hair which needs a little red hair dye), he has Woody Allen’s mannerisms, he dresses like Woody Allen did back in the sixties (think upmarket C&A), and even has his Brooklyn accent nailed. Not bad for a bloke from Nottingham.

Close your eyes and you could be in a night club in Greenwich Village, New York not the Manchester Jewish Museum, Cheetham Hill, Manchester.

PS unlike Woody Allen, I’m not a fan of jazz but the first part of the show which featured jazz guitar and vocals renditions of classic songs from Woody Allen’s films was excellent.