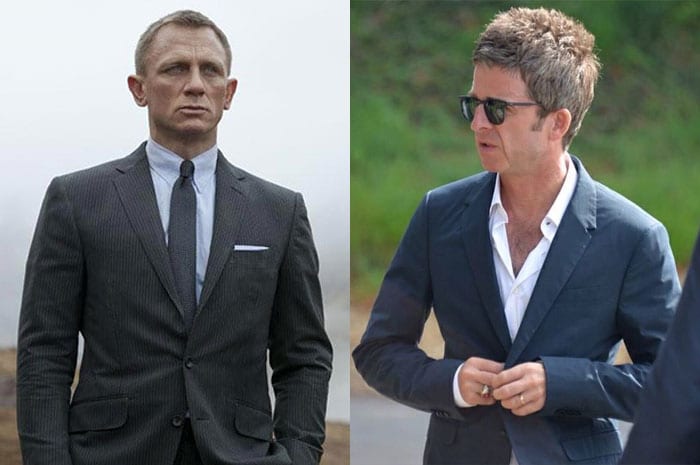 Two things are certain about the next Bond film. It will be released in 2019 and it will feature Daniel Craig as Bond.

The official US release date is November 8 2019, and while a UK date has not yet been announced, it will be earlier than in the US.

One thing which isn’t certain is who will sing the theme song.

Earlier this year it was reported that Paul Weller and Noel Gallagher were working together on a song they hoped would be the theme for the film.

“I want to write a James Bond theme tune,” Weller told the BBC. “I’ve got this half a song that me and Noel Gallagher worked on and I think it would be great for a Bond theme. There’s a bit of minor key going on. That would be an ambition definitely.”

And apparently Noel is a bit of a Bond fan too.

He told Germany’s N-TV channel that he would jump at the opportunity to write the Bond theme.

“I would do it in a heartbeat. I could do it and it would be great, but I’m not a star and for that you have to be a big star. You have to be someone in America.”

Another reason he’s unlikely to get the job could be because of something he said in an interview with the NME in 2008.

He told the NME he had more spare songs than he knew what to do with and would like some of them to be used as the next James Bond theme. One of them was Freaky Teeth.

But he probably didn’t endear himself to the producers when he said: “It’s a bit of a piss-take that the greatest British agent of all time has to be soundtracked by a bunch of fucking Americans.”

Since the Weller/Gallagher declaration of interest, it’s been reported in the press that two more big names are frontrunners for the job.

According to The Mirror, the film’s producer Barbara Broccoli is determined to bring back Adele to record the film’s theme tune. She sang the lead track for Skyfall, the first 007 theme to win a Grammy and Golden Globe award.

The Express, meanwhile, has reported that Beyonce is in talks to record the theme song.

More bad news for Noel is that a petition to persuade Barbara Broccoli to hire him to write and sing the Bond 25 song closed 51 votes short of its 200 target.

So it looks like the chances of Noel getting the job are no better than a definitely maybe.

If he doesn’t get it, maybe he could write his own tribute song to Bond. He could call it From Rusholme With Love.