Will Corn Exchange become a top dining destination or flop? 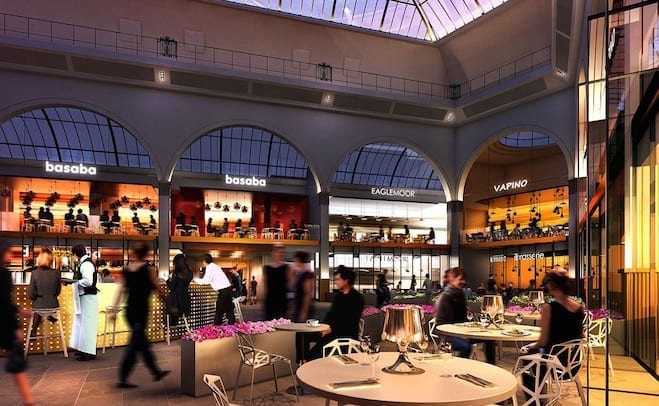 As the Corn Exchange gears up for reopening, Simon Binns wonders whether the food and drink strategy will work and what it means for The Printworks…

A massive casual dining venue is never going to set pulses racing. Or is it?

If any building in Manchester has suffered an identity crisis in recent years, it’s the Corn Exchange.

In the last 40 years, the Corn Exchange has gone from an alternative market for clothes, books, second had records and the like to a post-bomb higher-end retail offering with Adidas, Muji, Jigsaw and other smart brands. The Triangle stuttered on until 2012 when it was renamed…the Corn Exchange.

Brideshead Revisited was filmed in there in 1976. Ask your parents.

It closed last year. Why? Because Aviva, the current owners, had a plan. And that plan was food. Lots of food. And some drink, but probably not as much as food.

At the last count, fourteen food and drink brands had signed up for the next chapter (including present incumbents Tampopo and Salvi’s), and Roomzzz has agreed to plonk a hotel on top.

In case you’re not sure who’s in and who’s not, here’s the run down:

Don’t really know much about them to be honest: The rest.

The mix is made up largely of London operators and other regional chain brands, and the general consensus is that Wahaca is undoubtedly the headline act, followed very closely by the excellent Mowgli, which is only travelling in from Liverpool.

The rest are, arguably, fairly middling or untested formats, suggesting that the strategy is casual dining for the masses. Which will rely on a steady churn of tourist footfall.

Of these brands, only Wahaca is likely to have a firm following. I know plenty of folk who are looking forward to seeking it out as an individual brand rather than making a noise about the whole scheme.

That said, the recent signing of Mowgli has gone down well with more considered food fans. Which is a good thing.

A massive casual dining venue is never going to set pulses racing. Or is it?

Across the road, the Printworks has been regularly turning 9m people a year through the place. The draw there, however, was the booze. The Printworks was – and still is, to a lesser extent – all about the wet sales.

It was a self-contained drinkers’ paradise, home to the hardest working door staff in Britain. Throw in a massive cinema and a Nando’s, and every teenager in the north west has probably been through The Printworks at some point.

A recent attempt to bring in some more family friendly food brands – Papa Gs is a genuinely decent eating experience if you’ve got the kids in tow – have made the Printworks offering more adult. Hard Rock still has significant pull with the tourists. There’s a buzz around Soho noodle bar Busaba Eathai taking the Café Rouge unit, which stares into the eyes of the Corn Exchange.

Conversely, some onlookers have asked where the straighforward/pub/bar options are in the new Corn Exchange mix. Manchester likes a post-work drink or three.

But can the two neighbours work together, or are they fighting for the same custom? For every Busaba, there is a Pho. For every Hard Rock, there is a Byron.

The word ‘complementary’ will get thrown around by both but there must be some private concerns that this town might not be big enough for the both of them.

The Corn Exchange means another dozen or so restaurants are opening on The Printworks’ doorstep.

Maybe we should read it as a positive sign regarding the increasing visitor numbers to the city centre. Maybe the pull of shows at the Manchester Arena will keep everyone buoyant and busy.

Maybe Corn Exchange will be daytime and The Printworks will be night.

Maybe we’re not that loyal to anything anymore and we’ll go where the mood takes us, or where the offer/discount is best.

When the Corn Exchange finally reopens at the end of the summer, the owners will certainly be hoping there is enough to go around. And so will the neighbours.