Why this new feature in the Manchester Arndale is puzzling shoppers 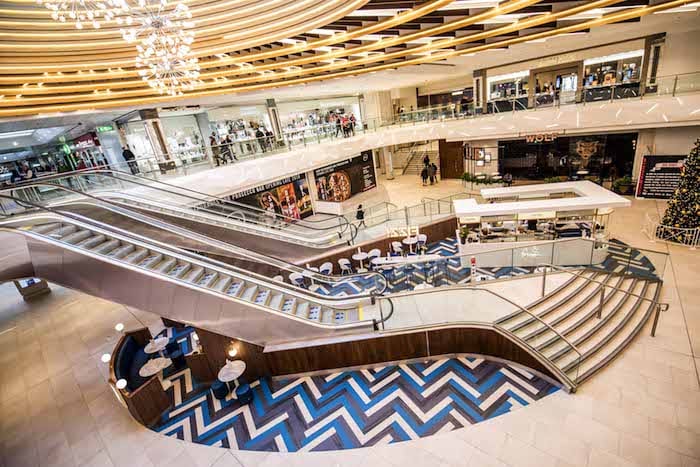 Last month, the Arndale unveiled its new £11m revamp of the Halle Square area inside the shopping centre.

And at the centrepiece of this newly renovated area you will find prosecco and cocktail bar Fizz! by Frizzenti, perfectly sandwiched between the two escalators leading from the ground floor to the next level.

But it seems there’s one new feature catching shoppers’ eyes much more than any of the new food and drink offerings that have recently opened in the centre.

Making 90% of the journey from the top floor to the bottom via the escalators, shoppers must still make their way down some steps before arriving on ground level. And it’s been causing quite the stir on social media.

But it turns out there’s actually a very important reason for it.

Dan Hett, whose brother Martin sadly lost his life in the Manchester Arena bombing last year, took to social media to point out what he describes as “Manchester’s most useless piece of infrastructure.”

Manchester’s most useless piece of infrastructure is finished, congratulations to everyone involved in phoning this one in pic.twitter.com/WzXejrddOp

The tweet has received a lot of attention with over 2,000 likes and 460 retweets – leading to a number of people expressing some humorous opinions on the strange design.

A second person questions the logic behind them, adding: “How an earth did this design get approved? The logic to take the stairs to the escalator..”

A third simply posted a GIF featuring a labyrinth of never ending stairs with a man forever walking up and down them.

However, one member of the twitterverse pointed out a Reddit feed dedicated to the escalators with a comment sharing what they think is the reason for the unusual design – and it was pretty much bang on.

There is a service road that runs directly underneath the ground floor of Halle Square – and because of the escalator’s mechanics, a pit needs to be dug out of the ground for the metal stairs to be able to move around – meaning the service road underneath would have been affected.

To overcome this obstacle, the decision was made to add the steps so that the escalators could remain in their planned position – which was confirmed by Arndale Centre director David Allionson.

“We know the stairs at the bottom of the escalators have sparked some interest: they had to be included because of some technical constraints presented by a service road beneath. There is also a brand-new lift nearby to help everyone access all areas of the centre.”

But for some twitter users that answer still wasn’t good enough – as they recalled there used to be escalators in the same area that didn’t require additional steps.

However the Arndale Centre were quick to prove these claims wrong by sharing a throwback photo of the shopping centre – showing the escalators were positioned in a different place to their new location.

But one question still remains. Why did they choose to install escalators at all, rather than keeping the stairs that used to be in the same area?

The answer is simple. Regardless of the additional few steps at the bottom of the escalators, they still move people quicker than if they’re walking. So from a logistics point of view, they help the flow of shoppers making their way around the Arndale – which in turn improves the shopping experience for visitors, especially when it’s busy over the Christmas period.