You may have noticed that the Tories have been in town this week... 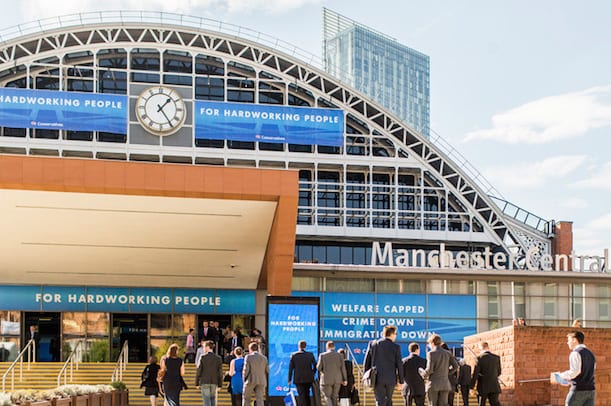 You may have noticed that the Tories have been in town this week, as the traditional ring of steel is thrown around Manchester Central for their annual party conference. They’re the government of the day, so it’s always a big story, but this year has been different, says Simon Binns…

Let’s get political. Sort of. The circus surrounding the conference has probably generated more column inches and broadcast hours than the speeches. Scenes outside the conference venue have been as heated and animated than those inside.

“Keep the
enemy out,
or keep them
close and take
their money?”

Protestors have marched, thrown eggs and listened to the messiah (or leader of the opposition to give him his official title) speak at Manchester Cathedral.

Mostly, it has been peaceful, respectful and carefully directed protest focused around a rhetoric of anti-austerity, fairness and policy difference.

At times, however, if has been ugly.

The Conservatives haven’t helped themselves by simultaneously claiming to tackle poverty and introducing a series of measures that seem to increase it, or by letting Theresa May actually, you know, speak. About anything.

But spitting and egg-throwing are neither big nor clever. Leaked emails about not wearing passes and pictures of rooftop snipers do nothing for the reputation of Manchester, nor its inhabitants.

Professional protesters can be an almighty pain in the arse at the best of times, but Manchester seems to be a magnet for them in recent times. 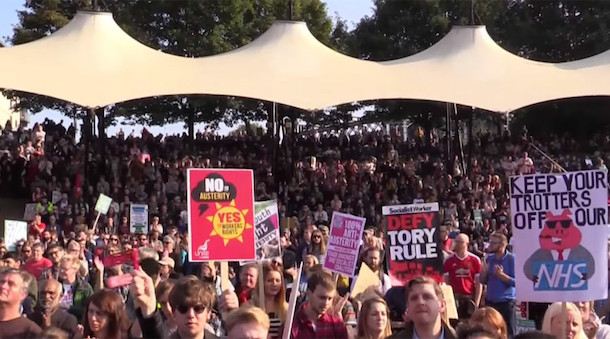 We live in a red city. So when the blues come marching in, what did we really expect? Should we have been better prepared for this?

It’s led many to ask whether it was such a good idea to let them hold their annual conference here in the first place. And some more ardent left-wingers have openly requested that they should never be allowed back. Ever.

Let’s look at the benefits to the city. The financial upswing across conference time is undeniable. Hotels, restaurants, bars, shops all see the benefit. Sales of eggs have boomed. After the last conference, in 2013, the estimated financial impact was just short of £25m across Greater Manchester. Cash in the tills at the back end of the summer, when traders are more than grateful.

And according to a report in the Daily Mail, not known for being particularly left wing, gentlemen’s club Silks seemed to be pleased the Tories were in town

The media descends – or it used to. Now it mostly just gets on the tram from Salford Quays. When they get attacked and abused though, it puts Manchester in a harmful light.

Protests notwithstanding though, his year has been an additional challenge thanks to sinkholes, tram works and other roadworks. Tried driving down a road in Manchester this week? You can’t – it’s closed. Want to park there? You can’t it’s full. Want to get a tram or a bus across town? Good luck.

The added pressure the conference has put on the day to day running of a city that seems to be literally falling to bits has been plain to see.

It’s a tough one. Keep the enemy out, or keep them close and take their money? The city councils have a cosy relationship with the Chancellor to protect, and then there’s that Northern Powerhouse…

Manchester’s political relationship with Whitehall puts the city in a slightly invidious position.

Without wearing my political colours too brightly, all I will say is that I was brought up in a working class part of the North East of England under a Thatcher government. I have seen what Tory rule is capable of when it puts its mind to something – like dismantling an industry and cutting an entire region adrift with frightening ease.

But Manchester’s assertion that cities need to drive politics rather than the other way round is the right one.

Otherwise, politics would drive us all mad, wouldn’t it?