WATCH: Sadler’s Yard Xmas Tree To Be Recycled Into a Pub 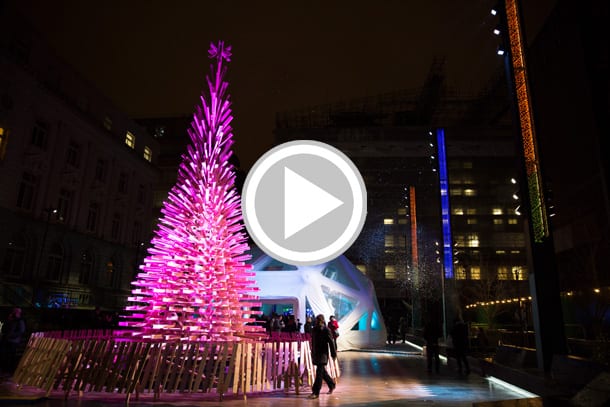 An 11m Christmas tree designed by leading Hungarian architects has been commissioned by NOMA to launch Manchester’s first new public square this century.

Sitting at the centre of Sadler’s Yard, the bespoke art installation weights almost 8 tonnes and will be fully recycled after Christmas and used to construct The Pilcrow, a new pub being built by hand on site.

The branches of the tree are formed of sawn logs stacked in a spiral formation around a conical base frame, using pine and oak. The installation, which includes approximately 8m2 of wood and 4.5 tons of metal plates, took three weeks to prepare in Hungary and five days to build in Manchester.

Its designers Hello Wood are one of Europe’s most renowned up-and-coming architecture practices.

The logs will be sawn in to a variety of sizes and cross sections in order to provide as many possibilities for future use. Some of the material will be used as work benches, with other parts used for furniture, flooring, wall coverings and traditional pub games.

The Pilcrow is the name of a new pub in Sadler’s Yard. Local people will be given the chance to take part in the building process, learn new skills and become part of the foundations of The Pilcrow Pub. A series of free-to-attend workshops will see groups of volunteers spend time being taught a new skill and then spend a couple of days putting what they have learnt in to action by constructing their part of the pub themselves. 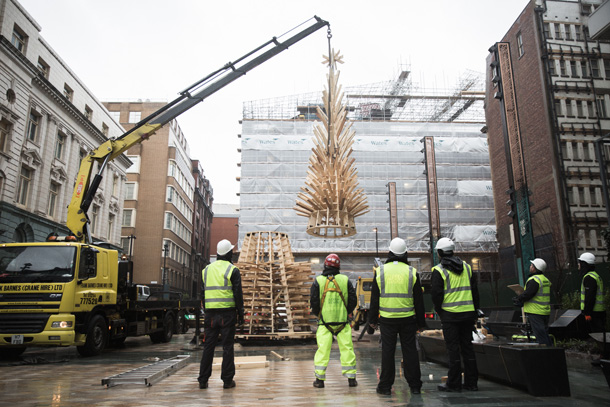 David Raday, designer and co-founder of Hello Wood, said: “It was an inspiring challenge to design and build a Christmas installation that is not only visually attractive and comprehensible for the wider public but also connects to a complex architectural and cultural project by re-using every element of the installation for the Pilcrow Pub project.

“We hope this tree will become a symbol for the power of community building during the Christmas holidays and later on in its new form when used in the pub.”

Joe Hartley, head maker at The Pilcrow said: “We were really keen to do something at Sadler’s Yard that truly embodies the spirit of The Pilcrow project and we believe that Hello Wood’s installation does exactly that.

“A visually stunning tree, there is nothing else like it in Manchester, with the best part being that once Christmas is over, we’ll be able to use the wood for the build of the pub. This is very much a community tree and we hope that everyone will enjoy it both in its initial form and when it becomes part of the pub itself.”